on December 11, 2008
Kainaz and I are big fans of Goan food.
Yesterday we met a Goan gentleman whose house we plan to rent. The real estate agent was Mangolorean too. We started talking about Goan food. At the end of it I was left with this huge craving for a Goan food.
So I decided to try out a restaurant I had hear about recently called Simply Goa. This is near the Khar market and Khar Station at Mumbai.
The decor was modern, spartan and pleasant.
They featured most traditional Goan dishes such as the chilly fries, vindaloos, balchaos and cafreals. Kainaz missed the bafat but that's technically a Mangalorean dish. No sorpatel though.
We had a Goan sausage chilly fry which was outstanding. It tasted fiery without being too sour. The potatoes were well cooked and gave a good counter balance to the pungent taste of Goan sausages. We are suckers for fried onions and there were ample ones in the dish. We had this with coarse pao (Goan bread). A promising start to the dinner. 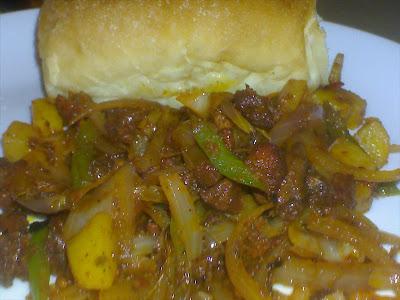 We followed this with prawn balchao. The balchao was slightly sweeter than what we have had at Infanteria at Goa. I think the latter is a curried version while what we had was the pickled version. The base looked quite tempestuous and I reckon it was made with onion paste, jaggery, vinegar and spices. The prawns were big but a tad soft according to me. Could have been a bit juicier. Still we quite enjoyed the dish. 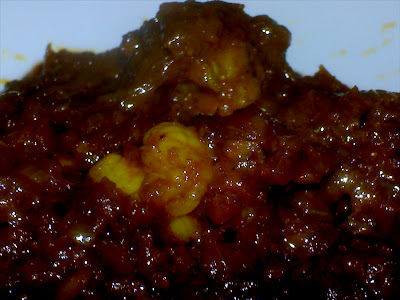 We decided to skip the vindaloo as that is not so uncommon. Especially if you live at Bandra. We had some lovely home made pork Vindaloo from Jude's Cold Storage at Pali Naka the other day. They serve these frozen portions at Rs 60 (1.1 USD) a box. Plus we were quite full by then.
Most dishes at Simply Goa cost Rs 150 - 200 (3-4 USD). Alcohol is reasonably cheap at Rs 60 (1 USD) a small peg. I passed as I was driving back. They have a range of Punjabi dishes too. The list runs on to two pages (!) while the Goan dishes cover one page in the menu. I hope they introduce pork chilly fry as we are quite fond of that.
This is definitely a good option for Goan food in the suburbs. Martins at Goa remains my favourite though. And of course Candies for its sorpatel.
Bandra Bites Mumbai highs

Viagra Online said…
I had never heard about Goan food, it should be an exotic food because I asked some people for that and any of them couldn't answer me.
7 January 2011 at 21:39