Spicy, but defintely not fishy...Jai Hind

on January 08, 2009
Years back, Netaji Subhash Chandra Bose, coined the slogan ‘Jai Hind’ to rally his army in our fight for independence. Political leaders still end their speeches with ‘Jai Hind’.

Today though, when a colleague of ours got into cab and said Jai Hind, she was referring to the chain of Malvani restaurants at Mumbai called Jai Hind.

Jai Hind had started as a simple, local sea food joint. They have spread quite a bit since. Branches which come to mind are opposite Kamla Mills (favoured by the office crowd), before Dadar station on Tulsi Pipe Road, Pali Naka (a simple one), Hill Road. The core cuisine here is Malwani.

What begun as an office lunch ended up as a slightly coerced birthday treat from a colleague at the Kamala Mills, Jai Hind today. Apparently who was bullied into it, rather quickly I must say, by the girls in our group. He did look a bit dazed through lunch though he sportingly allowed me to take over the ordering. That's my prerogative when we go out in a group. Still, thanks Ashish! 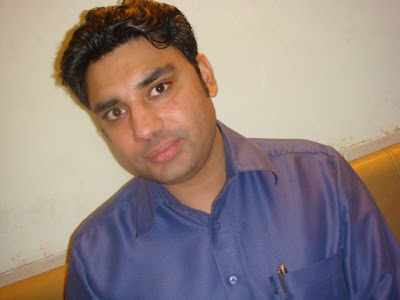 The food was splendid. Eating it hot and fresh was quite different from what we ordered home a few days back.

The bombil (Bombay duck) stuffed with tiny prawns was a delight. The bite of tiny, spicy prawns, inside the crisp, blander fish shell is a delight. Welcome to the Mumbai version of the Peking Duck. Just look at the picture below. Have you ever seen anything more beautiful? I would trade this picture anyday for a picture of Angelie Jolie. Or would I? 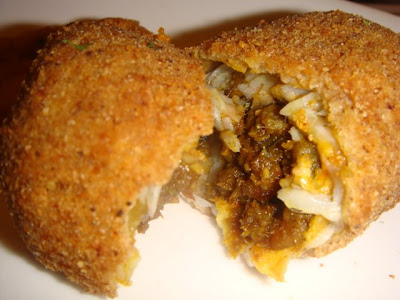 We had fried fish – surmai and Bombay Duck – both were out of the world. Surmai (king fish) can be chewy if not fried well. Not at Jai Hind. Here it was juicy and a joy to eat. The masala it was flavoured in really brought it alive. Not literally of course. 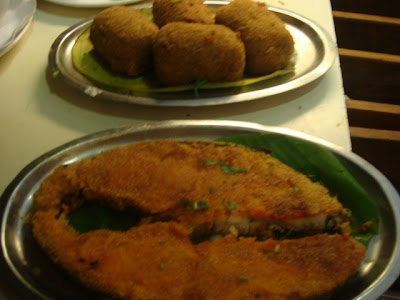 The Bombay Duck was nice and crisp. The semolina and egg batter was very faint so one could enjoy the fish. As my mom in law, who loves Bombay Ducks, would say, “worth repeating!”. 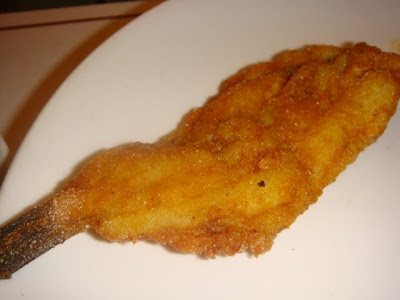 We had a lovely prawn chilly fry for the main course - fresh prawns in a thick, fiery, coconut based, red masala tempered with curry leaves. The picture below gives you an idea of its volcanic taste. This is quite different from the vinegar and tomato based, less spicy, Goan prawn chilly fry. 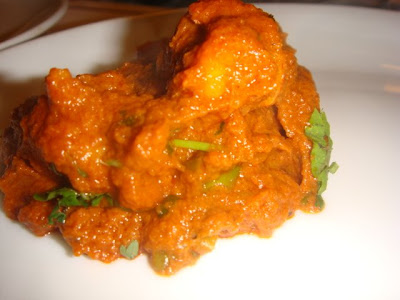 We had this with neer dosas which helped us break the spice. These flimsy dosas were nice, hot and had a slight, pleasant, firmness to it. 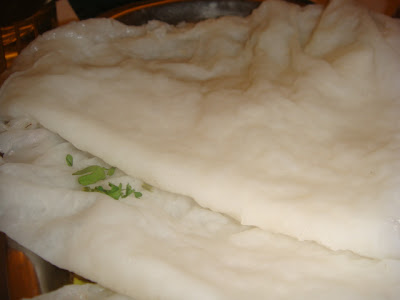 We had a chicken sukha too. This is a thick dessicated coconut based chicken dish which Malvani restaurants make fairly well. And it tasted quite different from the prawn chilly fry. 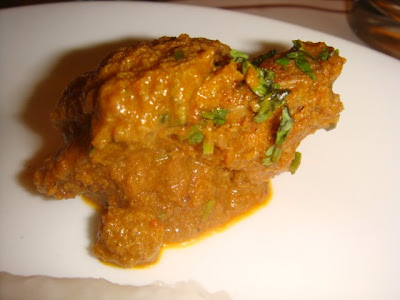 What I liked about Jai Hind was that the fish, prawns and meats were extremely fresh.

In case you are still wondering about how much I ate then I guess the round cheeks are a clear indicator. Must go home and walk today. 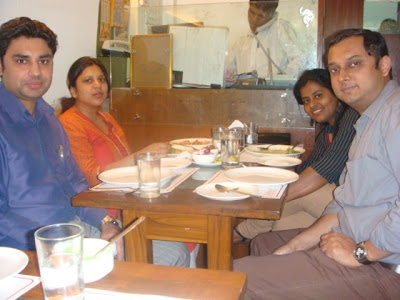 Jai Hind is fairly marketing savvy so they have something for vegetarians too. One of us who were abstaining from non veg today had palak rice. This is her favourite here. Her eyes lit up after she ordered a masala papad. This is papad (popadam) garnished with chopped tomatoes, onions, coriander and chilly. 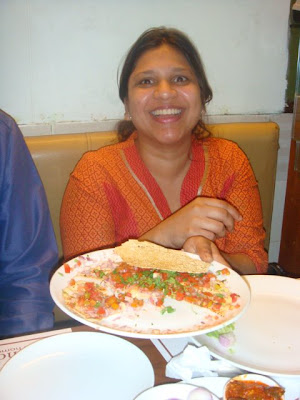 How were these? You are asking the wrong man.

Note: This was a treat so I am not sure of the prices. But I think individual dishes hover around Rs 100 (2 USD)
Indian food Malvani Mumbai highs

Anonymous said…
I did take the hint and am commenting :) Just one suggestion, the entire page is picture-heavy so even after refreshing the page a number of times the pics don't load...so either, decrease the resolution or make several pages for different posts...Apart from this, I like reading your blog..the pics and the content together makes it an interesting read...Happy writing!
8 January 2009 at 23:33

Unknown said…
I commented on your facebook snaps before reading this post :-)...... Anyways, next time try the corn pulao and butter chicken...Its fairly decent..I faintly remember that even Chicken Chettinad was good...But yes, what you guys had is definitely must trying...Din u have any desserts??
9 January 2009 at 01:13

Ace of Spades said…
i have never read a foodie blog. this seesm interesting.

Kalyan Karmakar said…
@Anon: thanks a ton for writing in. I read about this (heavy pics) on blogger notes too. And tell me about it! I work from a slow connection and some of the posts on Turkey took a week to post thanks to this. I am a bit of tech dino so tips on how to do this are welcome. I have already begun taking food pics on low res. Does this help?
@Kashi: I have tried a Keralite stew and Bong malai curry at JH in the past. Figured out then that it is best to stick to their core areas. I had excellent butter chicken at a restuarant called Moti Mahal at South Ex market, New Delhi
@Ace of Spades: fire away your questions next time you are in town
9 January 2009 at 17:50

Kalyan Karmakar said…
@Manasi: thanks so much for the multiple congrats. Wish you a great new year. I had meant to wish you much earlier. Was literally caught in between places
@Pavan: I am sure your hunger will one day get Candies and Jai Hind to Andheri. the latter seems quite likely at the rate at which JH opens branches. I found the sol kadi at J H a bit too sweet though
12 January 2009 at 18:02

Kalyan Karmakar said…
@Jessica - Thanks. sea food and photos go well together I guess.
Must appreciate the patience of my office mates. In fact the waiters sliced the fish in another table before they got it. I ran there to click the fish before they sliced it
14 January 2009 at 11:39

Anonymous said…
@Anon says: it does help taking low-res pics and using them for web pages, emails..it's faster to upload that way and makes for easy viewing...I don't know why people nowadays crave for very very high res images cz that is only helpful if u wanna blow out the pic u have taken to frame it or for posters etc..just in case this helps, ideally pics attached w/ emails shud be 13.2 KB, web pages: 103 KB, Docs: 541 KB... hope this helps :) BTW, i never expected you wud leave a response to my comm. ... :)
14 January 2009 at 23:39

k said…
personally, I think jai hind is strictly ok. I know most people will want to strangle me for this and i've tried to change my opinion but....
15 January 2009 at 10:53

Kalyan Karmakar said…
@K: I felt that way since we order in most times. But the stuff we had there was quite nice actually. I guess sticking to the basics - deep fried sea food helps. But if you say its strictly OK, so do I. That's editorial policy
15 January 2009 at 12:51

Kalyan Karmakar said…
@Anon: thanks for the tips. I belong to an era where we take printos of our digital snaps! Nothing beats the joy of shifting through pictures in an album for me. But I have realised that the food pics are largely for the net so I take them on VGA - the lowest res. Like you said it doens't make a difference. Not answer a comment. That's even ruder than not commenting
15 January 2009 at 12:53

Blabber Guy said…
Chanced upon this post a little late..:). But couldn't resist posting since i think JH pales in comparison to Gajalee for malvani food.

Gajalee has 3 joints, the original one in Parle (E), another in Andheri MIDC and one in Phoenix Mills. The seafood is very fresh and extremely delectable.

i have heard about the legendary V P Gajalee. Never made it there though. I've been to the one at Phoenix a few times. Must confess that Malvani is not my most favoured cuisine. But will definitely give it a dekka again
29 January 2010 at 00:14