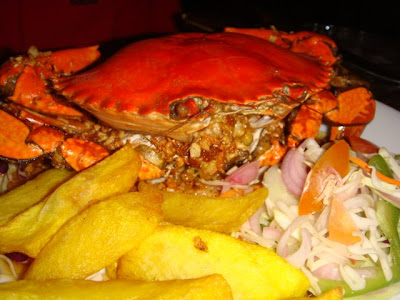 I wonder if there could be any better birthday gift for a food blogger than unexpected, free desserts, on his birthday from favourite restaurant.

Well, that’s what happened with us at Infantaria at Baga, Goa this year.

Like most years we headed to Infantaria for quite a few meals this time too. We bumped into our friend AKA Maguire over there. He said that he would introduce us to his boss, the owner of Infanteria, one night.

We had dinner on my birthday at Infantaria. We had a fairly exciting meal there. I thought I had written about everything that was there to write about in Infanteria. I was wrong. 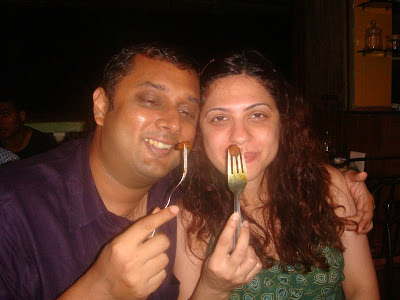 My brother had the chicken cafreal and liked it. I must confess I am not much of a cafreal person myself as I don’t like green masalas as a concept. The only exceptions are the Italian basil pesto and Thai green curries which I love. 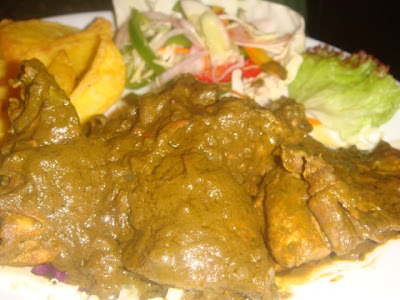 Infantaria is not all about Goan food though. My mom wanted something light and ordered a pomfret in cheese sauce. She loved it. As did everyone else and we kept dipping our fork into her plate.

Coincidentally, Maguire was looking after our table that night. This added to the sense of being with friends which in any case is typical of Infanteaia.

We ordered desserts after dinner – lemon tarts and a chocolate muffin. Maguire got these for us along with a slice chocolate cheese cake. The cheese cake apparently was compliments of the owner, who waved at me from the counter … a la, but not quite, Casablanca.

The chocolate cheese cake was out of the world. It was a baked cheese cake and had a lovely mix of chocolate and sweetness in a seductively soft base. I can still feel the heavenly taste of the cheesecake as I write. One more addition to our must have list for Infantaria. 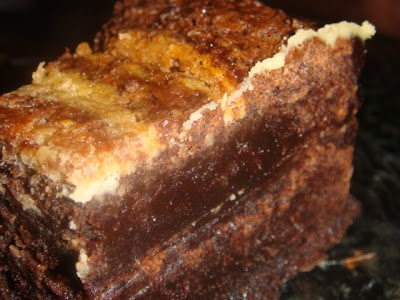 Kainaz discovered the chocolate chip muffin in this trip. She saw it at the counter and the muffin seemed to speak to her. Kainaz fell in love with it from the first bite. It is best had warm. An array of chocolate chips, slightly moist, in a chocolate muffin base, is her idea of the ultimate trip. She had it quite a few times during this trip after trying it the first time. 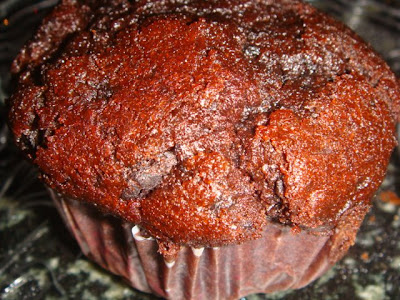 My brother ordered the lemon tarts which were fresh from the oven – buttery and gooey. They took me back straight to Kainaz and my first trip to Baga in August, five years back. That’s when we fell in love with Infanteria. It was end August and quite wet and lonely at Baga. We would go to Infantaria everynight and forget the damp weather the moment we stepped in. I remember having the lemon tarts then and rhapsodizing on their freshness even then. 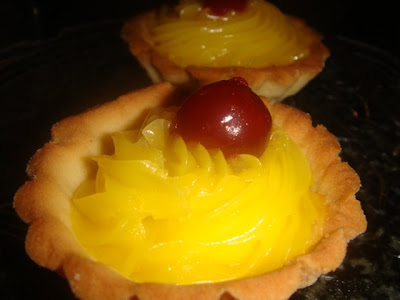 My baby brother wanted to try out new restaurants this time but did admit at the end that Infanteria was definitely the best and the warmest of restaurants that we went to at Goa.

His birthday was a day before mine. I guess age made him wiser. And he also did learn that while crabs are tempting, they need a hell of an effort, like all good things in life. 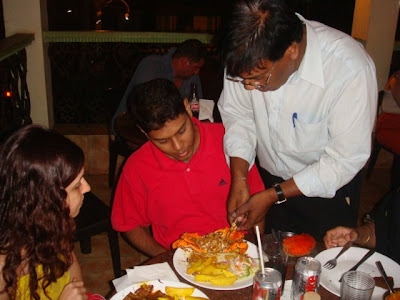 As for me, I can’t wait to get back to Goa, and to Infantaria.

Note: did I mention that when the cheque came we saw that ALL the desserts, and not just the cheese cake, were free ?!

Kalyan Karmakar said…
Hey Shomu, it was great we got to spend our birthdays together after almost ten years. I have a post on the water sports planned. Just haven't got the time with Ma around.
You will be the 'baby', no matter what you say, even when you are hundred :)
At K, we will always have Sprite
17 February 2009 at 14:34

Serendipity said…
Awesome! I was at Goa a month ago :D

Did jet-skiing by the moonlight. :D
(owing to freakish anti-tan policy)

I had the yummiest prawn-curry-rice ever (second in my opinion only to Soul fry Casa @ Fort) at Bosco's, where we basically vegetated ALL day.
18 February 2009 at 17:10

Kalyan Karmakar said…
@Serendipity, 'vegetate' seems such an Oxymoron with Goa and its prawns and piggies. Jet skiing by moonlight seems quite exciting. My bro was there this time and thanks to him I did a bit more than indulge in my favourite water sport of sleeping on the beach. More on that at faraway diaries soon
@Jessica: they were really yummy
18 February 2009 at 17:55

The Privy Lotus said…
When in Goa you should try Venite in Panjim and Thalassa (for Greek food) in Anjuna. Great view of the sea from Thalassa. Venite is in this beau bungalow, small place, but yum.
Hidden from the tourist eye. Amazing.