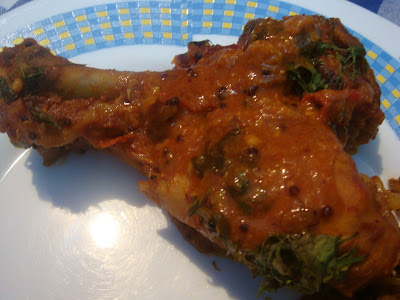 I had recently written about a dish which I cooked and had named 'Maximum Chicken'. This was named after Suketu Mehta's grpahic book on Mumbai, 'Maximum City'. I had used ingredients common to local cuisine in Mumbai - whole mustard seeds, curry leaves, East Indian Masala AND coconut milk - hence the name.

A reader wrote in asking whether one could make it without coconut milk as she didn't like the taste of coconut too much. I guess there would be many such people as coconut has a fairly distinctive taste. I, in turn, don't like coconut based sweets. Plus coconut milk in excess is linked with weight gain and high cholesterol.


I gave this riddle some thought and soon came up with a solution which works quite well.


I took out coconut milk, the favoured curry base of the Western and Southern coast of India, and substituted it with beaten curd/ yogurt. Curd is the favoured curry base of North India! Hence 'NV" or 'Northern Version'. I have tried this twice so far and it has been quite a success. And the good thing is that curd is a lighter and healthier base than coconut milk to start with. The dish dips into the cooking traditions of different parts of India - curry leaves, East Indian Masala and mustard seeds from the coast and curd from the North

I made this dish in a pressure pan and not in a sauce pan unlike the coconut milk version but I guess both would work.

Here's a quick summary of this fairly easy dish:

This is best had with roti or paratha. I had it with steamed rice too. It went well but just remember that there is not too much gravy in this dish.

The dish would take about 25 minutes to prepare with about fifteen minutes of active involvement.

I am a housewife and a foodie. I love to cook and I got to know about this blog accidentally. Your blog is brilliant. I have been visiting so many food blogs all these years and I can identify a good blog from a so-so blog. Your blog is very well kept, updated and provides "behind the scene" information and tips. We have recently moved to Kolkata. I have not set up my kitchen yet. Once I do, I will make the recipes that you have included in your blog. Your recipes are fun, can be made quickly and has variety.

Keep up the good work.

I was feeling a bit upset that I have not been update the blog as much as I would want to of late. Nowadays we go for a walk after returning from work. So dinner happens at 10.30/ 11 post which I am too pooped to switch on the comp.

Your mail made it all worth it and gave me just the boost that I needed.

Glad you find the recipes useful. I have lot of short cuts, quick fixes espeacially since I did most of the cooking at home for about 5-6 years. My wife said I should write a book called 'in between breaks cooking' as I tried to balance cooking with telly!

Calcutta is a wonderful place for food and I am sure you will have a great time.