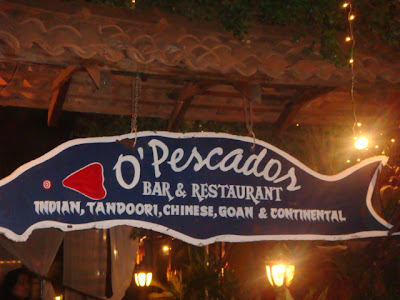 Kainaz and I have made around five trips to Baga, Goa, by now. We have hit our rhythm there - eat, sleep, stroll, eat, shop (Kainaz mainly), eat, drink, sleep...and identified our haunts too - Infantaria, Brittos, Love Shack (not for long though if the loo gets even more decrepit and the food any sparser) and recently, Lila's Cafe for breakfast.
This was the first trip to Baga for my brother and Mom though. So they wanted to explore the place a bit more. That's how we landed up at a few more places this time. 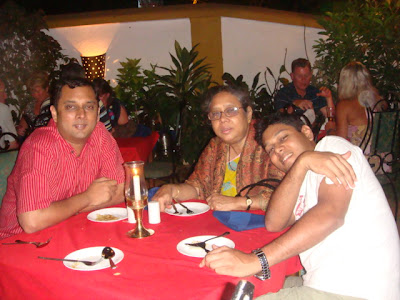 One was a garden restaurant called O' Pescador. This was in the stretch between Baga and Calangute just before the Subway shop.
The place looked quite nice at night with candle lights and tiny bulbs in the trees which gave it a magical feel. The mosquitoes were a drag though.
We decided to put the 'Pescador' tag to test and ordered a lot of sea food.
We had a squid ambotic which was red, spicy and fiery. The squids were pretty good too - fresh, juicy and not rubbery or chewy at all. 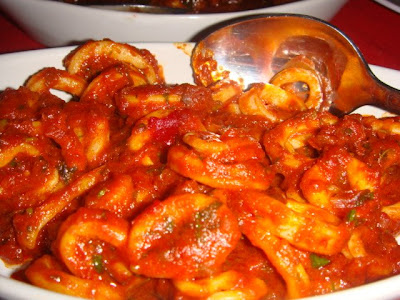 We ordered a fish vindaloo which tasted as fiery as it looked. It was quite an interesting take on vidaloo which one normally associates with pork and a slightly more sour taste than what we had here. Come to think of it, I am yet to come across two different places whose vindaloo tastes the same. The taste normally vary in a sour to spice continuum with varying levels of oil and redness. 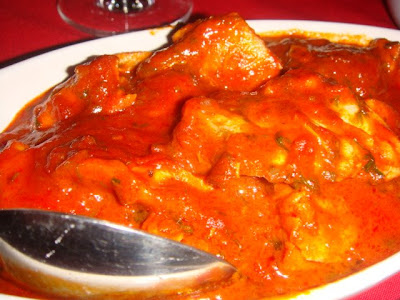 We also had a prawn balchao. Balchao is a Goan prawn dish which can be had as a pickle or as a thick masala dish. This tends to be on the sweeter side (a jaggery base perhaps?) and the prawns tend to be cooked more than in other dishes and therefore are firmer and tighter than normal. 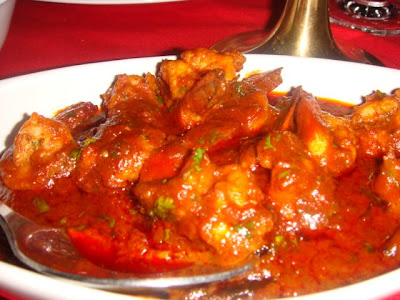 We wanted to have pao (coarse Goan baked bread) with the vindaloo, balchao and the ambotic. The steward told us that they don't serve pao as it was 'slow moving' and pushed on their naan. Slow moving?! Yah right. Or is it because naans are more high value? I must admit that the naans were bloody good but the fact is that Goan food needs to be paired with Goan pao or steamed rice! You can't bank on the gullibility of people for business all the time.

We also had a Goan sausage pulao. This is the quintessential Indian pulao uniquely flavoured in this case with sharp, spicy, sour, pungent Goan sausages. They had made the dish pretty well.
The place wasn't too expensive. The Goan dishes cost Rs 80 - 100 (around 2 USD) each if I remember right.
The candle light setting was fairly romantic if you overlooked the mosquitoes. 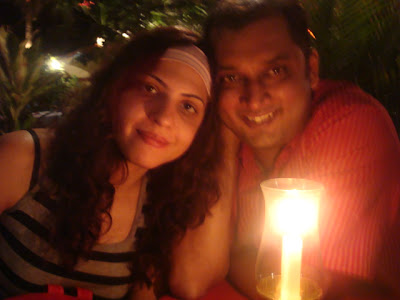 The food was nice and authentic too. As my little brother sagely said, the experience taught us that no matter where you eat, the food is always good at Goa!

He also said a few days later that the food in Goa is always good, but Infantaria is best!

Note: we didn't have to strip for our meal (see the pic of the menu below) 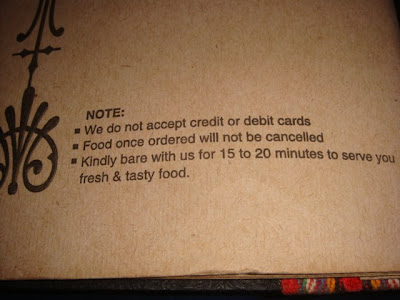 The knife said…
ditto...I think I know every nook and cranny on the Baga Calangute stretch by now...always feel like home the moment I reach there
9 March 2009 at 17:11

k said…
3.30 pm is a very bad time to read your blog. It's usually the time when i'm hungry and reading elaborate descriptions of our favourite foods in our favourtie destination doesn't help my resolve to diet!!
10 March 2009 at 15:30