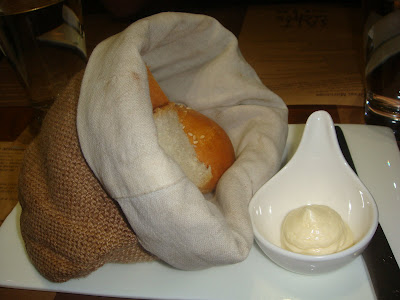 At times it is a tough call between being vain and sharing good news. If you have followed my blog for a while and seen liberal sprinkling of my pictures and noticed that I disclose my name then you would have guessed that I am not a very modest person to start with.

Well let’s just say that something good has happened at work which might lead to a mind blowing trip, possibly for both of us. So it’s been celebration time this week with me being up there in the clouds for most of this week. I’d promised to take Kainaz somewhere special for this.

I took her to Salt Water Café, the new restaurant at Bandra. This is where the old Jashan restaurant used to be, in between Reclamation and Mount Mary.

Salt Water Café, an offshoot of Salt Water Grill, lived up to our brief of a special place. The place was buzzing on a Friday night and it is a smart idea to book a table and go. The décor was nice. Wooden tables and benches, very Italian café. I don't know why its called 'Salt Water' though as it is not a sea food place.

We decided to have something different and ordered a meat platter and a cheese board.

Here the person taking our order, a gentleman in specs and in a khaki jacket, took over. He was the one who suggested that we have both at the same time. He said the meats were salty and the cheese would give it a break of taste. We had earlier planned to have the cheese first. He was right. He also said that these platters, with the bread that comes along, would be enough for us. He was right. He also suggested a nice South African, semi dry, red Sangiovese (?) to go with the food. This was a good recommendation too and the wine was chilled just right.

I like to see people with a point of view and people who know their stuff in a restaurant. This is rare in Mumbai. So I really appreciated this.

The food was mind blowing. There were three types of excellent cold cuts in the meat platter. The ham was so thin and fresh. As was the salami with little pebbles of fat. Ethereal. And salty like the maitre de said. 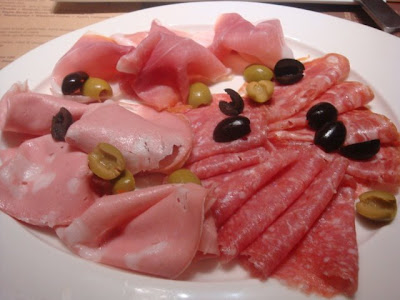 There were quite a few types of cheese, a slightly bitter creamy one, neutral slices, salty cheddar and one pasty one. Should have asked the names. These came with little slices of apple and black grapes and nicely complemented the cold cuts. We had this with the fresh complementary bread which they served in little cloth sacks and replenished twice when we asked for more. 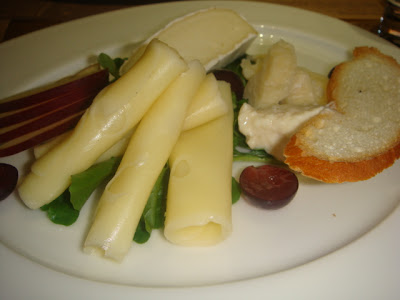 Lovely cheese, great meats, fantastic bread…as Swiss as it gets. Those in the know will know what I am referring to. I think the treat lived up to the occassion.Kainaz seemed to really love the food and neither of us looked up once we started on the food. 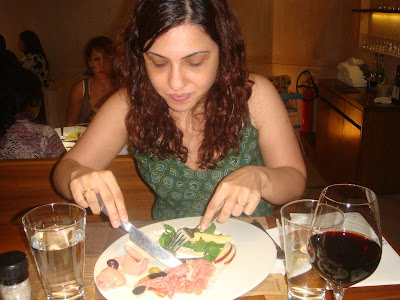 The platters ranged between Rs 400 – 500 (USD 8 – 10). The main courses were largely cheaper with pastas and stuff in the range of Rs 250 – 300 (USD 5 – 6). The food looked quite aesthetic and we would probably try it the next time we are here. They had interesting meats too like smoked salmon, rump of steaks and duck. They also had a seared chicken leg! I think they heard my complaint about restaurants which only serve chicken breasts, and not legs, in continental dishes.
The meal which started so well had to end well. This time a waiter recommended a plum baked cheese cake which I had my eyes on too. This was a little bundle of delight and was exquisitely flavoured.
We also had a ‘flourless chocolate fudge’ which was heavenly mix of brownie like base, soaked in fudge with a sudden coffee after taste. Mind blowing. 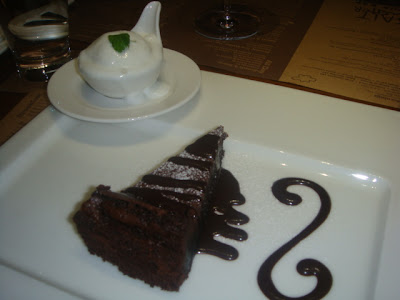 I think they have a good thing going here and I do look forward to my next visit here… celebration or otherwise.

Kalyan Karmakar said…
@jessica...yes i know it sounds funny but the temperature is close to 40 degrees centigrade here. far from the room temperature of Italy or France
@Kashi: that's the one. Don't know about the Sanjeev Kapoor bit though. We tried it for Rashid's farewell but you went there and saw it was quite seedy. They must have sold off after that
6 April 2009 at 13:22

Kalyan Karmakar said…
@Mumbai Diva, the place was quite a pleasant surprise. the credit for the photos, except her's, goes to my wife. She normally has to sit through my clicking the food. So I gave her the camera this time which kept her engrossed.

manolin * said…
so far the way you think about Out of the Blue, Salt Water Cafe and Pizzeria have been exactly what i think of them.

Kalyan Karmakar said…
Thanks Manoloin. Great to hear that :)