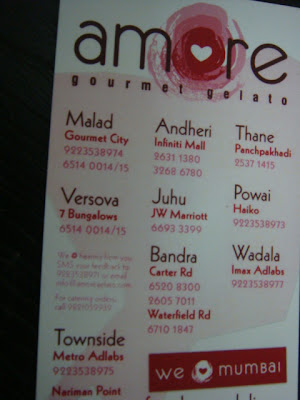 It's just past midnight. The time when Kainaz's and my thoughts often turn to forbidden pleasures.

We used to depend on Baskin Robins when we wanted to call for ice creams. Then we got a flyer with our newspaper saying that Amore, our favourite gelato parlour, had begun home delivery of gelatos.

I remembered the early days of Amore when they were really snooty about their gelatos and would insist that you eat them on the spot at the shop. They said that their gelatos were too delicate to be taken out and had to be eaten fresh. I remember smuggling the gelatos out a couple a times and running to my car as we wanted to have ice creams at home after dinner.
I guess the lure of lucre has led them to sell out and start a home delivery service. How the mighty have fallen! And who's complaining?
Though, to be fair, they send the gelato with a few pices of dry ice so they are serious about keeping their cool.

We have must have called from Amore at least four times in the last fortnight. Kainaz's favourite cookies and cream and a couple of new flavours suggested by them - Swiss Chocolate and Walnut Brownie. Each flavour is a bite of heaven...and twice over as they mix flavours on request. We normally call for the large pack, 250 g. This is the smallest size that they deliver and costs Rs 195 (4 USD). 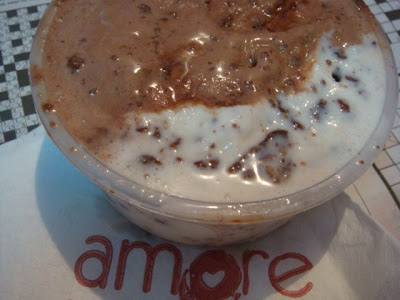 And I must make a mention of the Waterfield Road branch at Bandra. Their folks are particularly helpful and proactive. They search for your preferred flavour from neighbouring shops in case they have run out of it and suggest very good alternates too. The order reaches one pretty fast. They apparently take orders till 1230 at night.

Magical Homes said…
I lurrve!! my fav is chocolate walnut brownie. Between Mad Over Donuts and amore at carter road, i doubt I'm going to achieve my weight loss goals!!
14 May 2009 at 01:33

I dont like you for putting up pictures of things I want to eat.

Kalyan Karmakar said…
@Serendipity...the best thing to do with food cravings ... is to give in