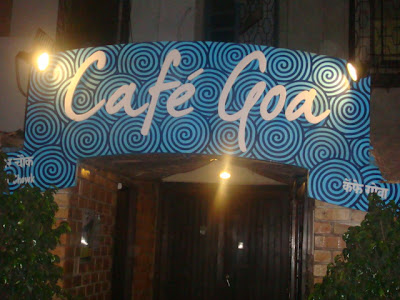 Bandra, the Catholic bastion of Mumbai, didn't have a good Goan joint for long.
Then Simply Goa opened at neighbouring Khar with some fairly good Goan fare which is reasonably priced. (I can't resist saying this, I reviewed it four and a half months before Rashmi Uday Singh did!)
Recently I heard about a place called Cafe Goa, which has opened where Trafalgar Chowk used to be near Mehboob Studio, Bandra.
Kainaz and I went there a few nights back to celebrate a good day.
I liked the ambience when I entered. The white walls with dark wood furniture gave it a classy feel.
We were seated in the inner section. That's where we found out that they were replicating the Goan experience well beyond just the Portugese furniture. It is pretty hot at Goa right now. As it was inside Cafe Goa! They apparently don't switch on the AC till there are customers. And when they do switch it on, the ACs didn't cool. Not what you would expect at a fairly expensive place.
I was quite hot under my collar and hoped that the food would take care of things. Well, like the curate's egg, it was good in parts.
Cafe Goa has an eclectic mix of Goan and continental dishes. I believe that the owners are from a mixed marriage and hence the combination.
We love Goan food and started with a Goan sausage chilly fry. The dish was very nice. Well fried, it had a nice bite and was quite juicy. It didn't have too many pieces of fat though and we missed that. It had fried potatoes in the shape of French Fries. While traditionally potatoes are cubed in Goan sausage fry. Interestingly the dish did not have the sharp, sour taste that Goan Sausage chilly fry has. This would make the sausages at Cafe Goa easier for the uninitiated. But for Goan sausage addicts like me... this wasn't the real Mc Coy. And brown bread with Goan sausages! How affected can one get? At least offer one the choice of regular, white pao. 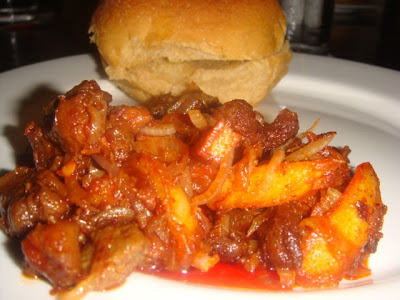 We followed this with a pork sorpatel. I prefer sorpatel to vindaloo. Kainaz is a vindaloo woman but played along as she was treating me.
Frankly we were quite full when the sorpatel came.
Which was good as the dish was a disaster. Sorpatel is with a mix of pork cuts - regular pork meat, fat, liver, kidney ... a full organ dump. Here they just had pork meat and no other cuts. The meat was chewy and ancient. It didn't leave one with a good feel. And the curry was cloudy, starchy and dense... nothing like the ethereal, sharp curry of a good sorpatel. The dish was as ghastly as the picture below suggests. 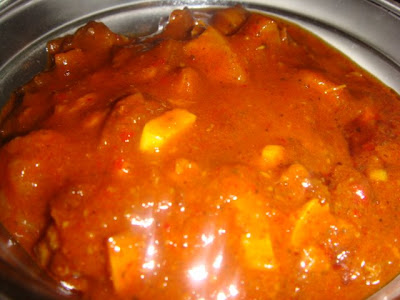 You are better off heading to Candies (Rs 100, 2 USD with bread) or to Judes Cold Storage (Rs 60, 1 USD for a frozen sorpatel) the next time you want Sorpatel at Bandra.
I don't remember the prices at Cafe Goa. I think the dishes were close to Rs 200 (4 USD) but I wouldn't bet on it.
I don't see us going back there in a hurry.
I believe that the owners are new to the business and hopefully they will set things right soon.
Do let me know if things change.
Bandra Bites Goa Mumbai lows

Unknown said…
Hi there! I saw a show "After hours in Mumbai" on Zee TV and they did a feature on Simply Goa, noone really talked about the food but everyone said the partying scene was pretty happening. It might be not the same place you are referring to but it surprises me that the partying scene in mumbai has far surpassed the one here in texas. Farah Khan said a good party will probably start a little past midnight and go to 5 or 6 in the morning?!?!?! THATS CRAZY!!
14 May 2009 at 18:27

Kalyan Karmakar said…
Hey Shahil, having seen the two places I think it was more likely to have been casa goa than simply goa. Must have been a launch party as both places were fairly dead when we went there.

I exited the Mumbai party scene7,8 years back though we do occassionally vegetate with friends till 2 or 3 in the morning
14 May 2009 at 19:16

Kirti said…
Gosh! Dont tell me you were full just after the Goan sausages... You should have taken me and Shanky along :-).

One of the most lingering tastes of Goa which time has not erased is Pomfret in Butter Garlic Sauce and Cinnamon Apple Pie with ice cream. Not Goan but that was in Calangute in January 2000! It was that good
15 May 2009 at 01:36

Abhishek said…
I really like the way you review a restaraunt! I think your descriptions touch subtle aspects of dining and food and I like your writing style. Its always a pleasure to read your blog.

And I agree comments do help motivate writing. I have been a silent reader for many articles of yours :).

I am a Goan but have never tasted the Portoguese or Catholic Goan food and your blog gives me a good insight into it. The next time I make a trip to Goa, I am sure going to make a list of all the places you have mentioned on ur website.
15 May 2009 at 03:50

Kalyan Karmakar said…
Hey Abhishek, I woke up to your comment last morning and was over the moon all day. Thank you so much. And all the best with your rediscovery of Goa

Kashi, you get alcohol and Goan sausages and prawn chilly fry at 201 Confidence, Bandra, so drop in quickly. And thanks for pointing out my blooper

Kalyan Karmakar said…
hey Shanky, for me the right day is the day they serve good food.

I left my partying days outside the marriage court.

I quite liked the sausage chilli fry, but the fish curry was nothing to write home about. but then, haven't managed to find good fish curry with fresh fish in any of the goan places so far :(

the choice was very limited in desserts, though i quite liked the mousse. but then i like dark chocolate. the people i went with, weren't too thrilled.

all in all, dunno about improvements, but the food was good in patches for us too. and i would recommend the cheese poppers any day! :)
15 June 2010 at 21:19

Kalyan Karmakar said…
@S: thanks for the update. I obviously have never gone back since. A Goan place where the cheese poppers were the best thing is like a Bengali restaurant where paneer tikka is the star attraction
17 June 2010 at 00:57