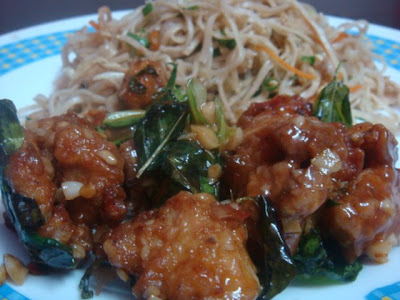 There is a new Oriental place called Asianwok at Khar which we order from off late. I would highly recommend them.

I think they have a full restaurant too. This is near Khar Station and from what I understand, they are shifting to the Carter Road food gully soon.

We love their Thai green curry which has a fairly authentic colour unlike the fluorescent green of Thai curries in most local places. The quality of chicken or prawns is very nice. They have a nice range of dishes, different from the usual chicken chilly, Manchurian, Mandarin Schezwan which populate the menu of Indian Chinese restaurants.

In fact they recommended and sent a dish called crispy chicken in basil leaves (in the photo) which was quite nice and different. Basil had a nice minty and sharp flvour which really brought the dish alive. And they gave me leg pieces when I asked them for it. They have soup called coriander ginger soup which Kainaz orders when she wants something light. It is one of her current favourites and she has the chicken version of it. I tried their fish sambal which was nice but nowhere as good as the prawn sambal I had at Boat Quay at Singapore. We have ordered a slightly sweetish chicken side dish once which was pretty good. We have called from there a few times when we had guests and people seemed to like it quite a bit.

I really appreciate the customer service there. One night I felt like a traditional 'chilly chicken' - soya sauce, garlic, green chillies, bell peppers. They didn't have it on their menu. But they made it specially for me when I told them what I had in mind and sent it home.

They have some schemes where they send you a cola if your order is over Rs 300 and two brownies if it is above Rs 600.

The phone number is 65221101 and I would stick my neck out and recommend it if you stay at Bandra, Khar.
Bandra Bites Mumbai highs Oriental

Unknown said…
If am not mistaken, there was one Asian Wok or somethin like that in Shopper's Stop, Bandra next to the 'Sevens' disco, below Sheesha, but then it closed down... any idea if they are the same guys??... The food at that rsetaurant was good
19 May 2009 at 01:16

Kalyan Karmakar said…
@Sharmila: i know what you mean. That's the chilly chicken we grew up on made by our mothers. Calcutta restaurants offered both where the boneless one was more expensive. The meat shops at Bandra such as Judes and Marks have something called 'chilly chicken' cut where they cut a leg piece into small bits on the bone. I have occasionally bought these and tossed them at home with soy and chilly sauce and pepper and ajino moto and capsicum and onion

Kashi: I remember the place but I don't know if they are the same. Wok is used quite a bit in naming Oriental places. There is a Kwik Wok at Carter Rd
20 May 2009 at 21:25