I will never forget the first time I had a brownie. In fact it was the classic combination of brownie and vanilla ice cream.

That was way back in 1998 when I'd come to an agency called Trikaya Grey from Calcutta to make a research presentation to the client. The folks from T G ordered food from a restaurant called Soul Curry at Phoenix Mills. At that time, Soul curry was the only restaurant in P M. P M was just a demolished mill with a lot of contruction work going on. And had nothing else other than Soul Curry.

Since then Trikaya Grey has become Grey. Grey is no longer at Phoenix Mills. I left Calcutta. Soul Curry doesn't exist. Phoenix Mills is now a busy mall with perhaps twenty eating joints, a multiplex and a bowling alley.

But I will never forget the taste of the brownie and ice creams that I had that day. I was a trainee and a year into working. The head of my office was there. As was the head of T G and now of G. The client has some bigwigs too. But that didn't stop me from asking for a second helping. And I must say that my hosts were very gracious and I had much better luck than Oliver Twist.

My acquaintance with brownies grew after a chocoholic called Kainaz came into my life.

We started with splitting a delectable, puddingish sliver of a brownie at Leos while we were dating. Unfortunately they still serve the brownies from the same batch at Leos. The brownie was fairly crumbly and stale when we went back to Leos ages after those heady days.

We then tried the wickedly named Brownie Point at Bandra. They have a range of brownies which are not too expensive, big and coarse. K and I have given it our thumbs down and stay clear of it. After all size doesn't matter when it comes to brownies. Their stuff is too primitive and rudimentary for our tastes.

The brownies of Theobroma at Colaba have a strong fan following. For obvious reasons. They have this amazing range of very well flavoured, soft and petite brownies. You just take a bite of their brownie and wait as it melts in your mouth. Chewing is not required here. We always make a pilgrimage to Theos when we are at Colaba. I love their rum and raisin ones the most.

Brownie Cottage would be a strong contender to Theos. This a chain with little outlets at malls and at Carter Road at Bandra. They have a wide variety - chocolate chips, a range of nuts, fancy chocolates such as Lindt, Toblereone, Ferroro Roche, After Eights. Though their basic chocolate brownie is what we, in Mumbai, call 'cheapest and best'. These are pure mushy bites of heaven. 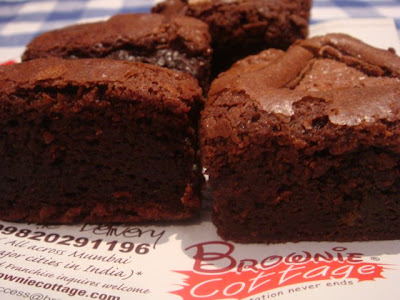 The brownies at Theos and Brownie Cottage are smaller than those at Brownie Point but are leagues ahead. As they say, great brownies come in small packages.

But the winner in my brownie stakes is Candies. They have simple chocolate brownies. They too are in the small family and cost Rs 25 or 30 (0.5 USD). They get over like hot cakes and are difficult to spot as the day progresses. They are soft. They are sweet. They are sticky. They are chocolatey. They are full of walnuts. They are yummy. They make me happy. I try to make each bite last a lifetime.

And, I am going to have one after dinner tonight. 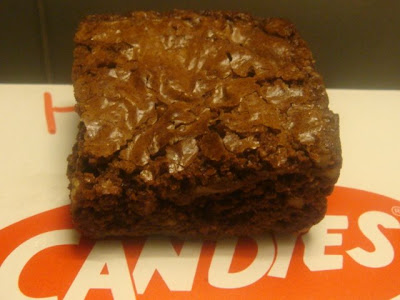 Kirti said…
After reading this, I think Kainaz has competitiion from brownies :-).

You are right, the brownies that we had at your place was heavenly. And thanks for packing for my daughter... She loved them!
22 June 2009 at 02:09

Kalyan Karmakar said…
Kirti...absolutely correct. difficult to say who is ahead though. The brownies that you are referring to are from Candies. Must do a brownie meet soon
Jessica...very true, often the simplest of stuff are the most memorable
Pavan... you have solved the circle of life. I hate those who try to score brownie points in
life. But the ones you are speaking of, heavenly.
Pinku...I will give you company. I am giving away the remaining brownies at work today :(
Sharmila... Barista brownies ARE nice and HUGE.

Anonymous said…
I am in the middle of a boring presentation at work and reading this...Oh how I love brownies....I could have them for breakie, lunch n dinna and still not get bored....some like it hot...but I prefer a cold brownie...Without any icecream....and a walnut one!!! Aaah instant nirvana...

I have this silly smile pasted on my face and the dude who is presenting is thinking am enjoying the really boring presentation!!! YEAYY RIGHT...

Am on a diet but let I will just for today go grab a brownie...Kamlakar...you have made me sneak on my diet...!!!!

But then thats the effect of brownies on me!!!

Cant wait to get one after work!!!

Kalyan Karmakar said…
Hey Kaus (Deshpande?), I like my brownies hot but I prefer my pastries chilled. My heart just broke as I distributed a couple of leftover brownies from the weekend at work. That's the only way for me to stop eating them! All the best for your brownie hunt.

Manasi said…
What a comprehensive brownie list! Are those Candies jelly squares and tarts I spot in the header bar?!
23 June 2009 at 23:34

Kalyan Karmakar said…
@ HCOF...I love the world of food :)
@Pavan: K says it deserves a post
@Manasi...not quite. i didn't mention the brownie and ice cream of JATC. Great to hear from you after ages. You guessed right about the picture. Am experimenting with the looks of the blog
24 June 2009 at 01:24

I agree Theos and Candies are the best - atleast Candies will not disappear hopefully!
24 June 2009 at 15:49

Kalyan Karmakar said…
@Miri...thanks so much for dropping in at my blog. Sorry for not answering to any of the lovely comments so far. Forgot to take the power chord home, cric in the neck...litanies continue.

You knew of the Soul Curry at Phoenix too!!! That's shut. There is a S C at Pali Naka, bandra that's open. I hope that you are not mixing the two.

Kalyan Karmakar said…
@Bookworm thanks for dropping...nothing can beat a brownie with coffee and a lovely book
27 June 2009 at 20:31

Bourbon Girl said…
Considering the blog started with a picture of Lucchi's, I am still stuck on those ...and to be honest I have like 2 places I will risk a brownie, everything else is walnut muffins! good read!
30 June 2009 at 13:12

Kalyan Karmakar said…
As my grandmom used to tease me when we were staying with them... "I love luchi" that's when they used to show I Love Lucy