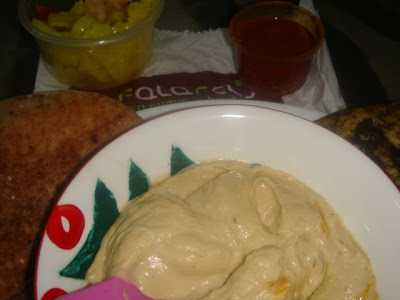 We have grown quite fond of the Mediterranean trademark dishes of hummus and pita bread. Especially when we want something light. The chick pea paste based dish and coarse bread is the antithesis of the Punjabi Channa Bhature which are made with the same base ingredients - chick peas in the channa and flour for the bhature. But while the hummus and pita bread are held together by dainty olive oil, the Punjabi combo has its hale and hearty origins in ghee, the robust clarified butter of India.
We like the Hummus and pita bread of the Bombay Blue chain. Maroosh (Phoenix Mills, Carter Rd) is pretty good too. They have a smooth, moist hummus and their pita is quite nice and supple too. We often call home from their Bandra outlet. But they act quite pricey about home delivery and make a fuss even though we live close by. We called up to order some hummus and pita bread from Maroosh, Carter Road on Sunday for dinner. But they said that they would not deliver. I guess they must have had enough walk ins to not bother with us. So much for praising people. I felt like a jilted lover. Unrequited, unstated love at its worst. My point is that you should either have home delivery or you should not. But you can't advertise 'home delivery' and then act pricey!
By then our heart was set on hummus and pita bread and we didn't feel like anything else as we had a late lunch and were quite full. Maroosh had left us high and dry. That's when I remembered Falafel, the 'vegetarian hummus shop'. They have an outlet at Hill Road, Bandra. I had the number and called them. And they delivered within twenty minutes without any fuss! As they say, there is plenty of fish in the ocean.
And the hummus was really good. Very delicate. Very light. The taste was quite ethereal and was just what we needed that summer night. There was shreds of some sort of green herb in it which gave it a nice springish touch.
We had ordered a whole wheat pita bread which was coarser and possibly healthier. The pita at Maroosh tastes better. But then remember brown, in food, is healthy but not always tasty. Actually the whole wheat pita wasn't too bad. We tried a zatar pita bread which they recommended. This didn't work for us though as the herbs and spices were too minty and sharp for our tastes.
I think Falafel is owned by Israelis. I vaguely remember reading this is a press clipping in their shop. That probably explains the fairly authentic tastes of their stuff. In fact, unlike Maroosh, they sent some pickled vegetable with their hummus.
We are definitely going to try them again, the next time we have hummus on our mind. I am sure that will be soon.
Too bad Maroosh, playing hard to get is not always a good idea pal. Problem is that Maroosh makes a bloody good chicken shwarma too. No Shwarmas at Falafel. So I guess as they say, 'Never say never again...'
The phone number of Falafel at Bandra is 26458000. The cost of hummus and two pita bread is about Rs 110 or 2.1 USD. Two people will need three pitas though.
Bandra Bites

Moonshine said…
I tried hummus and pita bread at bombay blues when i came down to bombay last...didnt like it too much.. here we have discovered a cozy place round the corner called rogue elephant which serves very nice hummus!!!! Yummy it is!!! Light.. tastes amazingly nice and cool
9 June 2009 at 20:09

Anand said…
The Falafel's opposite Regal is excellent also...would recommend ordering extra falafel balls though. Also, their Sambusa is occasionally quite good. For some reason, Falafel's food tastes horrible unless its super fresh.
10 June 2009 at 12:09

Kalyan Karmakar said…
Moonshine... have you tried the paprika hummus at Bombay Blues? Very nice. But I have hear someone else complain too. They said the hummus was ice cold.

Rogue Elephant sounds likes a lovely place. Sounds like me after a bad breakfast

@Anand...the first time i went to Falafal was at the Regal one before a movies. Don't you find falafels to be a bit like Daal vaadis.

Anand said…
I think biryani (like pizza) tastes best when its cold..

next time you want hummus...make at home....its easy and there are thousands of recipes on the net...all you need is some chick peas, sesame, olive oil (and garlic if you like)

we make ours at home....and use it as a base for sandwiches works well and is healthy too....

Kalyan Karmakar said…
@Pinku: I will check it out. We are hummus addicts. And our favourite place is in hiding. They refused to deliver once and the phones were delisted when I tried last night.