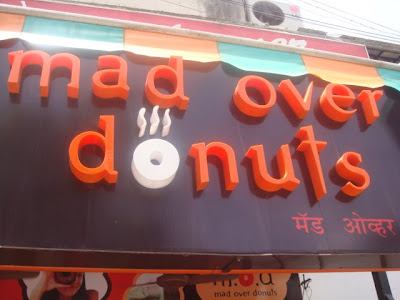 At the risk of having someone 'flag this blog for objectionable content' I must write about the sensual experience that we had this morning.

Kainaz and I had just finished breakfast at Crepe Station. We had a nice Farmers Breakfast - egg white omelet with chopped potatoes, potatoes and chicken ham, perfectly salted, in the 'air conditioned' section where the sweat hung heavy as the AC was yet to wake up.

I suggested that we step across to the newly opened Mad Over Donuts shop at Carter Road, Bandra. It shares a shop with Gelato Gelato. We had gone to Mad over Donuts (MOD) at the Oberoi Mall at Goregaon in the past and had quite enjoyed their stuff. They had an assembly line there where one could see the donuts getting made. Fascinating stuff.

This our first visit to the smaller, Bandra franchise. There was a huge array of donuts - chocolate, strawberry, jam and even cheese! It was like being in a donut heaven. How did one choose? 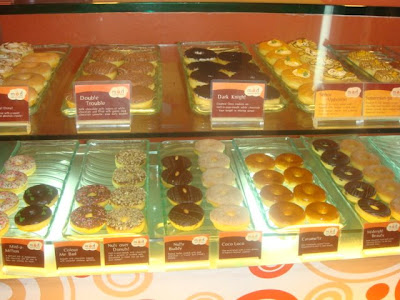 With a prayer in my heart I pointed at something called Hazel Dazzle (Rs 40/ 0.9 USD). The menu card described this as 'Nutella Bavarian Cream on the inside and hazelnut flavoured chocolate on the outside. The Donut is sure to dazzle'.

K asked them to heat the donut for twenty seconds. That done, we took it in a plastic plate to a table outside the shop. What we then experienced for the next few minutes was pure sin. Such pleasure can't be right. We indulged in pure debauchery in the middle of Carter Road in a dusty, sunny Sunday morning.

I tentatively poked the donut. At the risk of repeating myself, it was hot, real hot. I tried again and slowly caressed it till I got used to the heat and then slowly broke a piece. A stream of molten chocolate sauce oozed out the moment I touched the donut. I slowly licked the sauce of my fingers and tasted the most heavenly, sweet and mellow chocolate sauce with a wickedly tempting hazelnut flavour. I was in paradise. I followed this with a bite of the donut. This was really soft, fresh ... like a really loving, tender embrace. Every bite was pure ecstasy and we couldn't stopped moaning in delight as we shared the donut. Sundays couldn't get any better. 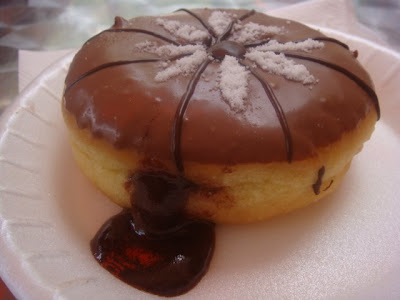 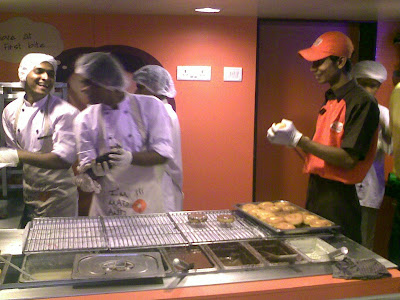 Anaggh A. Desai said…
Damn you! My monday just got screwed, shirt got spoilt with the impure thoughts that got a chocolate kick up the back side. You are hereby instructed to ensure such posts do not happen on Sunday but only post Thursday so one can safely plan.
15 June 2009 at 09:55

Magical Homes said…
ooooh! love them. am found there at least thrice a week. have you tried double trouble? sinfully chocolatey.
15 June 2009 at 10:51

Kalyan Karmakar said…
md, the problem with going thrice a week is that u probably go there after a jog while i rarely manage a walk. But i do have some experiments planned such as having the donut with and without heating to see which works better. So double trouble here i come!
15 June 2009 at 12:30

The Nomad said…
I love MOD, so I got some boxes when I was confined to the sofa with the injured foot.It DID make it a lot easier.Its always a great idea to have people around you know precisely what you like :)

I love most of their donuts but simply loooove the simple, flavorful and melty Cinastix.LOVE IT.
15 June 2009 at 14:57

The Nomad said…
And while doing the heating experiment, try heating it just 8 seconds. That's the optimum I have arrived it.
15 June 2009 at 14:58

Kalyan Karmakar said…
Nomad, you deserve a Nobel for the eight seconds of wisdom. Not that i would have minded doing the research myself.wish the MOD guys thought of this themselves. Right now am dreaming of a cinastix heated for 8 seconds in the middle of a workshop. Great food and a good read works best for me when i am stuck at home
15 June 2009 at 15:45

Jessica@FoodMayhem said…
Oh man, what a doughnut! Now that you've given me an intense craving, I have to go out and find a good doughnut.
17 June 2009 at 23:08

Kalyan Karmakar said…
@Jessica...hope you had a succesful donut hunt

Bong Mom said…
I had never known Donuts until I came to the US. Now that I am here I crave Mongini's pastries and don't really heart Donut that much
18 June 2009 at 20:05

Kalyan Karmakar said…
@Bong Mom...we grew up on Jalojog's chocolate pastry, rum ball and mutton pastry. Mongini's came in the last 4,5 years of my stay in call. Was Particularly fond of the chicken salad roll. Came to Bombay and realised that the Monginis outlets in Cal were far more upmarket.
@A... join the club
19 June 2009 at 14:53

was so happy to read your post...for two reasons...a I am mad about and over donuts...secondly the brains and hands behind those awesome flavors they have at MOD is a personal friend...

since you seem to be a true blue bong with not just a sweet tooth but a whole set that sweet am giving here her blog link...she does personalised stuff and home delivers, sadly though only in delhi...but then am sure you would visit this city sometime...

Kalyan Karmakar said…
Hey Pinku,i do travel to Delhi on work but this would be a greater incentive.

Please tell your friend that she deserves the Nobel prize in art. What creativity. What flavours. Genius.
20 June 2009 at 13:08

Viagra Online said…
I really get excited when I saw a box completely full of donuts it makes me wish to eat it all.Generic Viagra Buy Viagra
1 September 2010 at 22:01