on June 24, 2009
The first rains have finally appeared at Mumbai. Just as the government was speaking about artificially inducing rain. The rain's still flirting with Mumbai though. You get the odd teasing shower instead of a good burst of rain. Still I guess this is good for our farmers.

It rained for more than the usual two minutes this afternoon. It was quite romantic. The sky was overcast. There were heavy clouds and it felt so good to see the rain through big windows.

The problem with the 'romantic' part was that I was sitting in a presentation at work where words such as indices and factors and attributes were being bandied around. Not very poetic.

So my mind wandered to wet afternoons while growing up ... rainy days where there would be no school. The standard fare in Bengali houses during rain was the rice and pulse dish of khichudi, or khichdi as it is known in the rest of India.

I don't know the reason behind the khichdi and rain connection. Is it because rice and daal (pulses) are always there in Bengali households and one could cook up something even if one couldn't go to the market? Is it because it is easier to cook the two together rather than cook two separate dishes? Handy for the woman of the house when rain means drying clothes at home and keeping kids busy who are at home as schools are shut? Or is it because the hot, sludgy dish is a good comfort food when it is wet and cold all around? 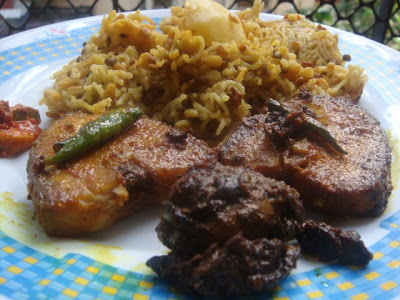 Of course khichdi is not had alone. It is accompanied by bhajas (Bengali for fries). Popular choices would be fried hilsa (in the picure above - fried hilsa, hilsa oil and khichudi) , brinjals or cauliflowers dipped in gram flour batter and fried or even an omelet! A hot, oil soaked, deep fried, crunchy accompaniment is a must for khichudi. One of my favourite fries (pun intended) is alu bhaja or fried potatoes. This consists of thinly sliced potatoes, smeared with turmeric powder and a dash of chilly powder and salt, deep fried in oil till its nice and crisp. But not crunchy. I had some tonight even though the rain had stopped. For whatever its worth, we made it with olive oil and not the Bengali favourite of mustard oil. Hopefully this will mitigate the sins of deep frying. 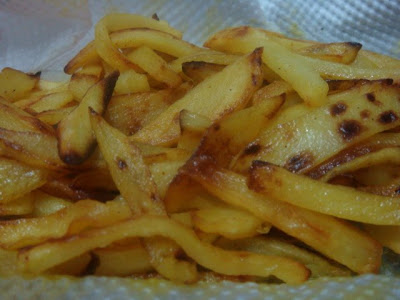 I am not sure if the khichudi and rains combination is widespread across India. But fried snacks such as pakodas in the North and vada paos in Mumbai go pretty well with rain. As does hot tea or masala chai for those who love tea.

And I can vouch for rum and Coke, kebabs and biriyani for a rainy dinner.

What is your favourite rain food?