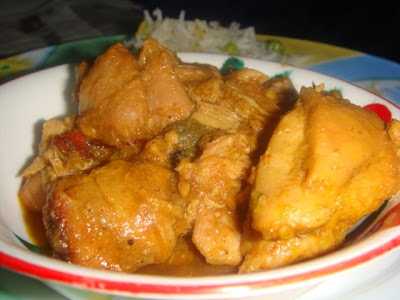 I got an SMS from K in the middle of work on Friday. A few of our friends had suddenly decided to drop in at night. I guess the idea was that we'd order pizza, Chinese, biryani, beer or other standard informal meet stuff and chat late into night on life and beyond.

We watched horror films the last time we met over pasta at the place of another couple from this group. What's your take on horror films? I don't find them scary. I get bored. Watching them is the most horrifying part. Human savagery ...The Pianist, Schindler's List, Saving Private Ryan, Blood Diamond, The Last King of Scotland, The Full Metal Jacket, The Killing Fields ... now that's scary.

Anyway I had other plans. No horror films. No ordering food. I suddenly felt like cooking even though it was after a work day.

The menu was my Renaissance Paneer, which I embellished with fresh chopped basil, and kosha chicken.

Kosha mangsho is a slow cooked Bengali mutton dish which is quite legendary and popular. Though it's been recently pointed out to me that it is an Oriya dish. Frankly I won't argue with that as Oriyas (those from Orissa in Eastern India) are supposed to be great cooks.

I wanted to make kosha mangsho for the gang as it was quite popular the last time I made it for some other guests. The problem though was that this we were a group of thirty somethings this time with our aches and pains and red meat taboos. So I decided to make it with chicken. This was a challenge as chicken doesn't taste as good as mutton. Plus 'kosha' means slow cooking over a long period and involves drying the dish. How do you do this with a flimsy meat like chicken? But then what's life without a challenge? I had never cooked chicken for six before and this added to the fun.

The end result was quite good. I couldn't dry it as much as I wanted as chicken breaks if you cook it too much. But I think the result was quite satisfactory and works well if you can't see red when it comes to meat. Here's how I made my kosha murgi (Bengali for chicken) for six.

The next day, 6th June, was my father's twenty sixth death anniversary. So my friends unknowingly saw it in. I am sure he would be smiling somewhere - cooking for friends was his thing. My cooking was a coincidence as I hadn't thought of this angle when I decided to cook up that evening. This sort of supernatural stuff is just the sort of thing which the rest of the group would have loved. Pity they didn't know

Kalyan Karmakar said…
At the risk of sacrilege I must say that I find mustard oil horrifying...blame it on growing up all over and not in a very traditional Bengali family.

You know Sharmila, I was planning to use a kadhai but the pressure pan was the largest vessel that we had and I find the 'dum' effect of pressure cookers reassuring. The chicken didn't break but I was on tenterhooks. Sipping beer while cooking didn't help LOL

Will try an open kadhai next time.

I didn't find the films horrifying but I found the savagery of the Nazis hard to take. In fact lost my appetite while watching the pianist. Was totally uprepared...
10 June 2009 at 17:35

Home Cooked Oriya Food said…
Hey thanks for stopping by...

Kalyan Karmakar said…
@Home cooked Oriya Food: Thanks for dropping by :) I was going through your blog and was fascinated to see the similarity of Oriya and Bengali dishes. I guess I will pick up Oriya in the process. For example, now I know that mangho is mansha in Oriya

@Jessica - I guess one gets scared by what one believes in. I am the only odd one out in our group who is not in to ghosts. K loves horror films. And the friend I wrote about, who prefers boneless cuts, kept her eyes shut through the movie.

Bong Mom said…
I am sure your dad must be proud of you. All that impromptu cooking seems like great fun
Mid week partying is totally out now :( getting old I guess :D
18 June 2009 at 20:08

Preeti said…
was missing my Kolkata days..so had chicken kosha this afternoon for lunch coincidently saw your and Sayantani's post on the same...loved it!! It was an amzing feeling eating the chicken-rice combo....ekebare kolkatay pouche giye chilam:)
8 May 2011 at 22:02