My wife loves someone else... Salt Water Cafe, Bandra

The first was about my new phone, E71. I liked everything about it except the camera. It is very important that my cell should be able to take good photographs as I might be at a restaurant without the camera and would depend on the cell. I was quite disappointed with the pics. And it was a super expensive gift from K so I grumbled in private. Then a friend told us that you need to press the letter 't' to focus the camera. Well take a look at the pictures in this post. Straight from E 71. The irony is that this friend who has unlocked the key to great photos has gone off food and off non vegetarian food in his successful quest to lose kilos!

The other discovery was a more of realisation that the Salt Water Cafe is emerging as a strong contender to Out Of The Blue's position as our favourite continental place at Bandra.

We had cold cuts and cheese in our last visit to SWC. So we thought that we will check out their cooked stuff. And man, the food was mind blowing.

I like the yellow lights and light coloured wooden look which they have. We sat in the first floor, by the bar, as I wanted a chair with a back rest and we had a great dinner.

We started with a ham mousse with salsa. I don't know if you have had a ham mousse before but I haven't. It is like a ham pate. Served cold. Tastes very light. Feels as if you are playing with a ball of soft cotton in your mouth. The flavour of ham is very polite and understated. And yet brilliant. A bit like Jeeves. (I've been reading good old Plum again after ages). The salsa gave a nice, juicy, flirty change of taste to the more dignified mousse. A masterpiece. As Kainaz said, anyone who loves ham will love it. And I'd say that anyone who doesn't would get converted after the first bite. 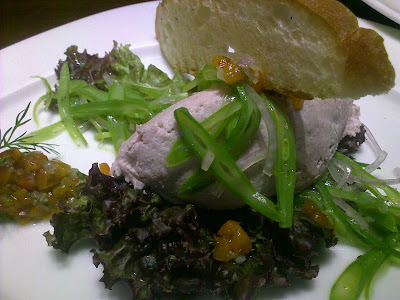 Kainaz followed this with a duck carbonara. This comes with linguini which she doesn't like. She asked for farafelle and fusilli which they didn't have. So they made it with good old penne. They brought it to the table and sprayed it with a bit of lemon spray. I took a bite and fell in love with it. As Agent Green Glass had reported, it was not doused in sauce. I believe that the sauce in a pasta is meant to be 'seen not heard'. It should be in the background. And so it was here. And it had such a wonderfully refreshing and virginal taste - faint cheese, a bit tangy, a bit sweet - pretty much close to the poet's idea of manna. Saucy and yet, loving. And I love duck meat for its slithery, playful bite. 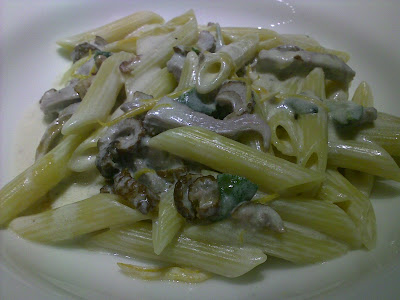 Salt Water Cafe is one of the few places, apart from Out Of The Blue, which offers leg pieces in chicken continental dishes. The doctor says I should have white meat. I hate the breast of chicken. So I order pork chops or spare ribs or lamb shanks.

The guys at Salt Water Cafe ensured that I had no excuse to live on the edge. I ordered their seared chicken leg with porcini. They really grill their stuff here and don't heat it in the micro. So we had to wait a bit. But it was worth the wait. It was the most divine continental dish that I have had. I am sure that Aunt Agatha's chef, Anatole, wouldn't be able to better it. (Sorry, but I have P G Wodehouse in my head right now). The sauce was heavenly. I can't even describe it. But I will. It was slightly sweet. It was slightly buttery and creamy. It had the robustness of fried onion. The chicken was succulent. Each bite had a bounce to it. It was served with lovely baked potato cubes. And deserves a Nobel Prize for humanity. No white meat dish has ever tasted so good in the history of mankind. Yes, I know I am carried away but it is so difficult to get a pleasing white meat dish in a continental place. 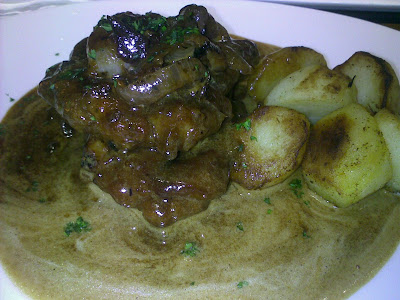 Kainaz was stuffed but how could I abandon the beauties in the dessert counter? So I had a baked blueberry cheese cake which kept up to the high standards of the other dishes. The cheesecake was very demure and subtle and not overtly sweet. That was left to the blueberry sauce which darted through the cheese cake. 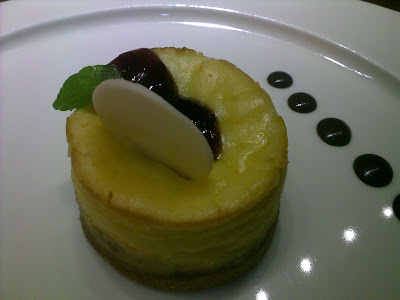 Truly a dinner which deserves a standing ovation.

And the phone camera didn't let me down. The lighting could have been better but you get an idea.For all the rimes that I've derided the E71's camera, it was just a question of figuring out which was the right button to press. No wonder Nokia is the Most Trusted Brand of India according the Brand Equity Nielsen (ahem, a bit of professional plug) study.

SwB said…
Like I said to AGG, they gotta pay me royalties, the buggers!. And Saltwater should really have been one word.

Anyway, no I am not a Bandra bugger. We lived for some time in Fort Area when I was a kid and now I live in Pune.

Kalyan Karmakar said…
Yes, Jessica, its such a relief

Hey Saltwater Blues, thanks so much for dropping in. You should get royalty. And consulting charges for the grammar check. I will keep an eye open to see how they spell their name. Its not impossible that they have spelt it right and that I have got it wrong :)

Kalyan Karmakar said…
hey, this is where Jashan used to be. Opposite the Barista at Mehboob Studio
22 June 2009 at 00:42