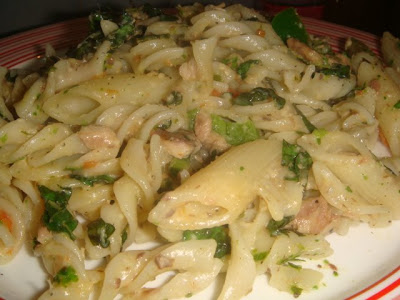 This recipe takes my gastrosexual, 'men are intuitive cooks', argument further.
Consider the facts. This recipe is the result of a medley of factors such as the memory of a non creamy pasta dish that I had at a restaurant, an idea to use chopped basil, a new herb/ condiment that I discovered while buying basil and some Japanese sardines which a friend had given and which I spotted when I returned from shopping.
So here's the story of the making of Sardinia, a Karmakar original pasta recipe.
I wanted to make a pasta which was not doused in white sauce but was just held together with sauce. A bit like what we had at the Salt Water Cafe the other day. I also wanted use some fresh basil which I like because of its sharp, zesty taste. But I planned to finely chop it rather than grind it a la pesto. I thought of buying some lemon grass to experiment with a touch on tanginess in a white pasta. Again inspired by the lemon spray that they put in S W C. That's when I discovered apcket of leaves at our local vegetable seller. These were 'lemon leaves'. I had never used these before but I picked up some. This was a great discovery as crushed lemon leaves gave nice, virginal, citrus freshness to the dish.
So this is what I had so far - faint white sauce base, chopped greens AND some spicy chicken salami which was in the fridge. I reached home with my shopping bag and suddenly spotted a tin of Japanese sardines in chilly oil which a friend of mine, Sushobhan, got for me from China (!). That's when I took the inspired decision (sounds pompous but the result bears me out) to use sardines instead of the cold cuts which we usually use. The rest was history. 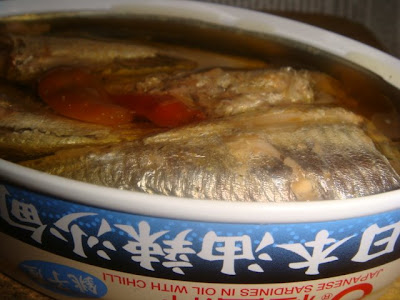 So you have an Italian dish - pasta, cheese sauce, garlic, basil + Oriental ingredients such as lemon leaves used in Thai and Malay cooking and Japanese sardines + an Indian cook. I could hear M J singing We are the world in Neverland.
So here's introducing, Sardinia, a dish which is unlikely to take more than twenty minutes to make, and is differennt and light and fairly good if you want to impress someone. Kainaz was grinning like a Cheshire cat after this.
Ingredients 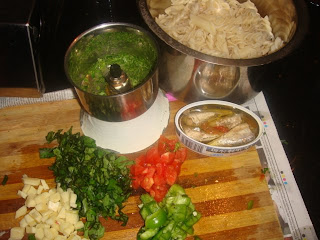 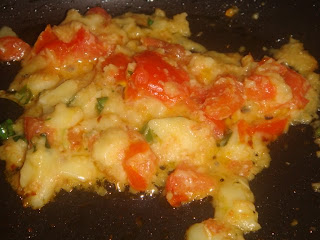 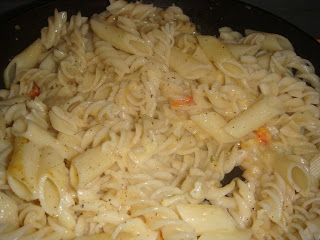 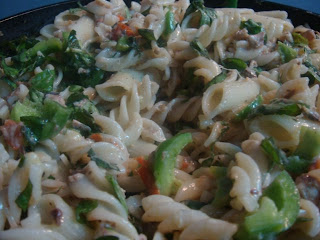 I guess a chilled white would go well with it and try to finish it with a chocolate dessert. We had some lovely chocolate fudge.

I am not fond of fish or fish pasta but the flavour of the fish was very muted here and was a nice break from the usual cold cuts that we use.
Conti Recipes

Anonymous said…
Sounds (and looks) delish. I love experimenting with pasta and will definitely give this one a shot.
28 June 2009 at 16:14

Manasi said…
what a truly international pasta,maybe a little garam masala would have taken care of the south asian aspect too :) i see the pasta police on your case :) :)
28 June 2009 at 17:28

Kalyan Karmakar said…
thats an interesting thought. I did put pepper. But thats cheating ;) maybe some cinnamon shavings?
28 June 2009 at 17:49

Serendipity said…
Sardines?? I had ordered a sardine pasta at Monza (Phoenix). It was madnessly expensive, and I had all of ONE bite(s).

Serendipity said…
I have a GREAT idea.
Buy a web domain, and allow users to post reviews of their own, including yours as the expert reviews etc..

and if catches on as a rage, You can institute some kind of 'Foodie Readers awards' to be given to places ... like blurrb or something... can be worked out in finer detail. You can make money off adsense, hits, and slowly doing paid reviews (once popular of course) not to mention great food that'l come your way.
29 June 2009 at 16:23

Kalyan Karmakar said…
Thanks S. That's a great idea. In fact I have friend, who's quit his job to do something like that ... but I think i have enough content to give it a shot without doing that. I did a review for Ivy for him. Can one import all the stuff from here on the domain?

Let's talk sometime and flesh this out. I am bit of a net dinosour so any help is most welcome :)

On an aside can't say how thrilled I am by all the comments pouring in off late. Thought I'll share this with you as you have been a regular right from the beginning.

Any suggestions on where I can get a Cannes Gold winner to treat me? Has to be a 5 star I think given the feat. I thought of Thai Pavillion
29 June 2009 at 19:00

You can definitely transfer all your stuff to another domain. You ought to take it up!

Given your zest to try new food - try India Jones at the trident - South east Asian, the theme of the restaurant is a travellers journey - and the menu, in the form of an old traveler's map and diary. The waiters are more than willing to explain the concept and the ambience is fantastic.

Kalyan Karmakar said…
@Serendipity... am planning on Indy Jones based on your suggestion. Based on their rcently. I am not too worried about the bundle as it is a treat... and like I said a Cannes Gold winner should give a super duper treat :)
30 June 2009 at 14:12

Kalyan Karmakar said…
@Serendipity...oh, and on sardines. The one's I used were preserved and not smelly at all. I can vouch for that as I am super sensitive to smelly fish
30 June 2009 at 14:12

Serendipity said…
order the Grand Platter if you want to do yourself a favor :D will allow you to taste a lot f things, and really get a flavor of the place.

Kalyan Karmakar said…
@S: thanks for the pointer. My wife and I LOVE far eastern food. Couldn't stop eating at Thailand and Pattaya.

This definitely disproves the theory that men (IF they cook!) cook by the book...you seem as deranged as me when it comes to putting together ingredients ;)
Looks really delicious and yes "inspired"!
6 July 2009 at 12:06

Kalyan Karmakar said…
Hey Raji, thanks on both counts. Quite the mad professor huh? Just posted an experiement with Thai curry paste, Kalyan
7 July 2009 at 18:17