What a fall there was my countrymen...Mc Nuggets 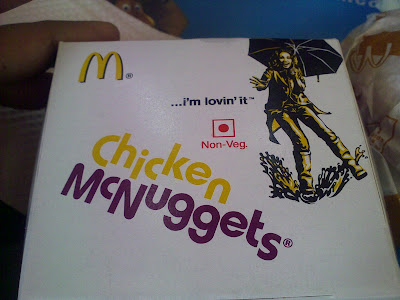 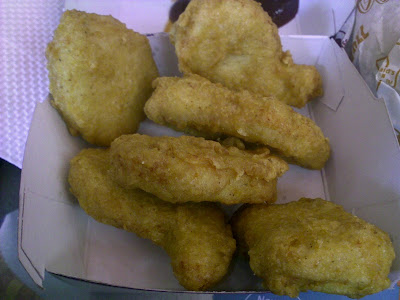 Imagine biting into the chicken patty of a McBurger without any sauce or burger bread to break the taste. A bit like biting into a rubber slipper. The flavour of chicken was sucked out of the nuggets. You could barely feel the chicken. It was more like an unidentifiable white alien moon rock. A bit like a fossil of a chicken. I have rarely eaten anything so devoid of taste. The barbecue dip which came with it was the only solace. And the fillet of fish which I had ordered.
If you put a premium on deep fried stuff then go for the Fries if you plan to live on the edge. Don't clog your arteries with such tripe.
BTW Kainaz liked the Mc Nuggets and said she wouldn't mind trying it again.

Sharmila said…
Even we could not get them here ... the girl at the counter tried to make up a lot of excuses .. I wish she had just said they had run out of it. :-)
I have found their veg burgers very good and always love the fries.
19 June 2009 at 17:56

and yes havent been able to get my hands on the nuggets yet..they always seem to be out of stock on that item...

dont know whether its becoming that popular or is this some sort of weird marketing gimmick...
19 June 2009 at 18:23

Unknown said…
haha I saw the ad on desi tv, and I was like what? India just got chicken mcnuggets? What was on the kids menu till now? How did they have a MCD without chicken nuggets..? I personally don't like them either, so don't blame you :)
19 June 2009 at 18:35

agent green glass said…
nooooo. i hate mc d's. except for the softy like ice cream thing they sell. yes, the fries are bloody addictive, but then so are bidis.
their burgers taste like cardboard, and if you ask me Bembos beats them hollow. bembos burger with a fried egg in it.....mommmmmy!
19 June 2009 at 21:05

Kalyan Karmakar said…
Come to think of it I wouldn't be surprised if the McNuggets drought is thanks to my wife!!!!

Sharmila, I like their Mc Alu tikki burgers and even their salad burger in veg.

Pinku, thanks for dropping in and all the comments. I love comments. Given that my Google ad sense
records count is 2 dollars, comments are what I blog for. McWorld is a lovely world indeed

Hey Shahil, good to hear from you. I think the kiddies have been hooked to the Happy Meals. Even I want the Kung Fu Panda Toy. Don't know how to go and ask for it with a serious face.

AGG - I've been to Bembos a couple of times. Didn't order the right things perhaps. Thats a new take on Fries. I think kids would break the doors if they new the equation. Grown up stuff works with kids
20 June 2009 at 13:06

Pavan said…
Well...thanks for the warning....however i still tried it since my frnd was paying for it! :)
U are absolutely bang on target.
The nuggets were so bland...and the dip with it was so artificial...i think adding a little bit of flavor in the nugget itself should improve the taste. Anyways, the shortage of stocks is just a gimmick. Those things happen even with other mcdi items.
Betw, thanks for calling me young Pavan!!
:D
20 June 2009 at 19:40

Kalyan Karmakar said…
ANY flavour would be an improvement young Pavan. It's blander than a speech by our PM currently
22 June 2009 at 00:43

Anonymous said…
The nuggets aint available in Bangalore as well..a friend wanted them yday and we went to a mac dee and they said they are outta stock till 26 June!!!!!

Anonymous said…
The nuggets aint available in Bangalore as well..a friend wanted them yday and we went to a mac dee and they said they are outta stock till 26 June!!!!!

Kalyan Karmakar said…
that's a smart idea...people might start pelting them with the nuggets after trying them
22 June 2009 at 16:59

Miri said…
I agree - just tasted this day before and it was awful - and I wasn't even in Mumbai, so suffice to say its uniformly awful!

And here this friend of mine (who is now in Chennai) and me (now in Delhi) were wondering whether Mc Donalds is better only in Mumbai - I guess not huh!
24 June 2009 at 15:55

Kalyan Karmakar said…
I think Mc D is fairly standard. I have had it at Delhi (Ansel Plaza), pune and calcutta (before it shut)... and you get such wonderful meat at Delhi that Mc D would seem like Tushar kapoor
28 June 2009 at 23:09