On the Shantaram trail... Leopolds, Theobroma

This Friday was wet... the first real rains at Mumbai this year. It seemed like the weekend had started and my mind wandered as little me sat in a meeting with the company bigwigs.

I messaged one of my colleagues to find out whether there was anything good for lunch in the office canteen or whether going out made sense. My team figured out that the boss was is in a dopey mood and they all decided to go out for lunch.

I texted my brief to them, "any place with hot, oily and spicy food with big windows", while nodding wisely at the bigwigs.

Call me a control freak if you want to, but after giving the brief, I went down and gave the answer too, Leopolds! Well in my defence, they came up with Pizzeria which didn't meet the brief. 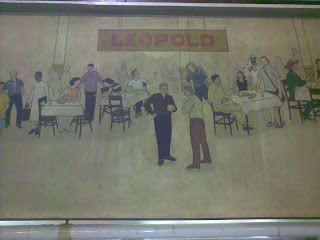 So off we drove down the amazing J J Flyover in the rains, down Fort with its old British buildings and the Gothic Marvel of Victoria Terminus, looking lovelier than Madhubala in the clouds, straight into the arms of Colaba Causeway. Colaba is where I first in love with Bombay, way before Gregory Roberts' book Shantaram put it on the world stage. There was a buzz, sense of decadence and freedom there which was just what I was looking for when I was young and restless. I could never get Mumbai out of my system after that and soon settled here.

So it was good fun coming back to Leopolds once again. This was Shantaram and Karla's Leopolds. But Kainaz and I claimed it well before that with our Friday lunches. Leos has an air conditioned section upstairs. But I feel that you get a real sense of the place downstairs. This could get a bit hot and stuffy but doesn't matter when you are in a group of friends as we were. Plus the wet weather meant that it was pleasant and cool. 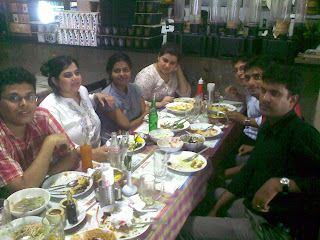 You should go to Leopold's for the ambience. The food is patchy, ranges from good to average. I think it was much better earlier. Kainaz and I felt that when we went there some time back. We missed our good old brownies which were now crumbly versus their earlier puddingish consistency. Plus we were sitting upstairs which was not even the fun part. But age had made us fussy and air con ruled over Cupid.

Same story this time about the patchy food. The two chicken side dishes, chilly (as hot as hell) and crispy, were brilliant if lethal - soya sauce soaked, ajino moto dumped, deep fried, yummy with a yin and yang, salt and sweet thing going for it. As hot, oily and spicy as it gets. Perfect for a wet afternoon. 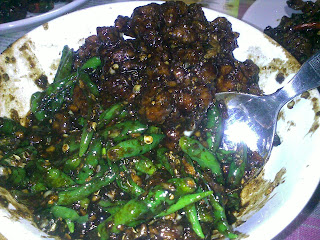 The rest was pedestrian, hakka noodles which were soupy (!), fried rice which was soggy ... so different from the crisp rice which K and I loved, the mutton in the biriyani had no salt and the prawns in hot and sour prawns were as stale as a bad pun. 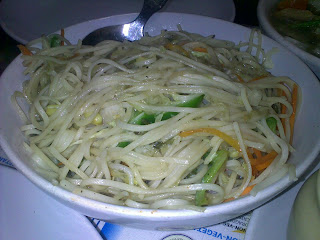 When you are at Leos you get a taste of an institution which is more than hundred years old with its quirks such as the fairly strange pitcher of beer, the old posters on the wall, the grafiti, high ceilings, big doors which open on to the street and of course the romance of Shantaram and Karla. Go there if you are with a group of friends and want to have a ball. But don't go there if you just want good food. Or want a quiet romantic evening. 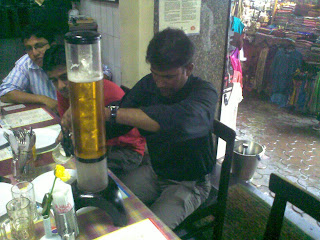 And spare a thought for those who died in the terror attacks of 2611. There is a bullet hole in the wall and a shattered glass from that night when terrorists opened fire on diners like us at Leopolds last year. A grim reminder of an inconvenient truth we seemed to have brushed away.

Lunch over, most of the folks headed back to the office. But there were a band of us who prolong the good times by heading to Theobroma for its divine desserts. A hot coffee and a sticky, sweet rum and resin brownie was just what I needed before I ran out into the rain to the car to drive back to work. I made it clear that I wouldn't share my brownie. But I had a bite from the millionaire brownie which someone else was having ... brownie doused in chocolate sauce...paradiso. Who cares if they call the boss a bully? I had tasted heaven. 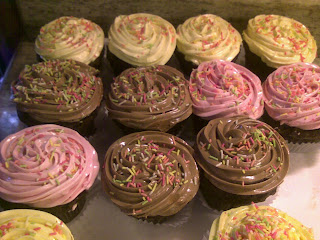 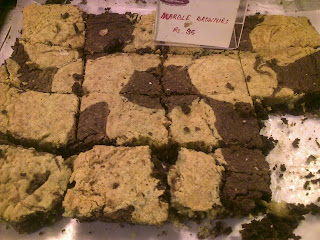 Jessica@FoodMayhem said…
That beer pitcher looks like part of a chemistry experiment. haha
28 June 2009 at 05:44

Scarlett said…
Both places were some of my favorite hangouts. Leo's just for the atmosphere & I must confess I did like the Chinese there...greasy & spicy. And Theo for their heavenly desserts. And they used to make this awesome Chicken Pesto sandwich. No wonder they call it 'The Food of the Gods'!!
29 June 2009 at 11:24

Kalyan Karmakar said…
Arre you missed the chilly chicken and crispy chicken then. It was really nice and crunchy. And so sinful that they should keep a confession box nearby.

Serendipity said…
Pack the Dense chocolate loaf and take it home. If i were to describe it to you, this comment would soon be A-Rated.

Its the pretty little chocolate cake tied up in golden ribbons near the payment counter, atop the display fridge.

In terms of the experience, its a close second to the Double trouble at MOD's so you know what im talking about ;) Jst have it ever so slightly heated.
29 June 2009 at 16:29

u have made me oh so nostalgic....

I was new to bombay, had too much time on my hands and read up Shantaram...apart from the love of bombay and its magic it also imparted the name of leopold and I went on a trip with a colleague from andheri to colaba on shantarams' trail.

Kalyan Karmakar said…
@Serendipity... I picked up a hazzle dazel and a dark night from MOD last night. Given the analogy I am rushing right now from bandra to pick up the loaf ;)
29 June 2009 at 19:03

Shantaram was such a nostalgia trip for us. Colaba was my stomping ground when I landed here. leo's was a big part of my 'bachelor' life and then our courtship as Jane Austen would put it.

Brought back a rush of memories.

Serendipity said…
Nah, i dint like Hazel Dazzle that much. Maybe cos I had the Double Trouble first and the standards were wayyyy too high
30 June 2009 at 10:36

Serendipity said…
Exerting my authority as a (HUGE) foodie, Here's a to-eat list for you.

Miri said…
I have had the pleasure of tasting Theobrama's wonderful brownies and they are exquisite!

Leo's - well as you say, atmosphere over food...

Kalyan Karmakar said…
hey Raji, the brownies are Theos are awesome... like a breezy sonnet :)

This is what boss of dopey boss said when he read the post:

"You do think of the right things,

However I prefer Mondegar, I found it during my first stint in Mumbai, I was staying as a pg in RC Church, working at Tardeo Arun Chambers, so dinner was at Mondegar invariably, very convenient, followed by a stroll down to the pg.

Even now it seems to have a better menu and atmosphere - for me anyway.