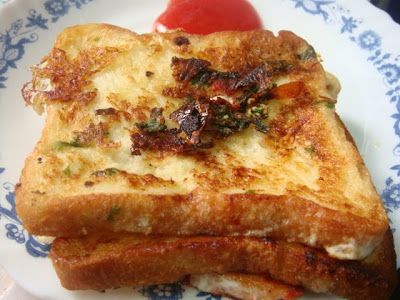 The other day I read an article by Vikram Doctor, one of my favourite Indian writers on food, in the Economic Times. This was on the Indian version of French toasts.

Unlike the French version, which is sweet, the Indian one is salty and spicy.

As Doctor says, this is a lovely way of converting tired, limp bread into a lipsmacking dish. He also said, that most men who dabble in the kitchen are partial to this as this is one of the first dishes one learns to make. Very true. I often used to make this for the family on Sundays in Calcutta, years back when I was in college.

I remember Calcutta street food guys selling something called 'deem paruti' (egg and bread) at the office area of Nizam Palace in the early eighties. They use to dunk a thick slice of bread in egg and toast it over a portable coal oven. I used to quite like it as a chubby seven year old on my way back from International School at Lee Road.

Doctor's article brought up some fond memories and I decided to make some French Toast before setting off to work the other day. They turned out to be best 'French Toasts' that I have ever made. Put me in a lovely mood as I sat behind the wheels to navigate the morning traffic to work.

So here's the real and easy way to make French Toast. This version is with olive oil and egg whites to tide over middle age angst of cholesterol, B P, etc. If you are young and restless with the world ahead of you then go ahead and use the whole egg, regular oil or even, dare I utter the forbidden word, butter.

Note: there are a few points to keep in mind while making French Toast:

Vikram Doctor calls this 'Bombay' Toast. I disagree with this though as I had learnt to make French Toast it from my mother who had never come to Bombay at that point.

I prefer to call it Indo French Toast!

Pavan said…
Nice...Recently i had gone to Ahmedabad with a colleague for official work. We were staying in a guest house and we made French toast everyday for breakfast.
4 pieces for each of us, made in normal oil with the whole egg and top it with butter! We used the maggi noodles masala as a subsitute for the normal masala. Didnt use milk though! My weight shot up by 3 kilos in just 5 days!
But i agree, the lighter version of the toast is also yummy...and thanx for the recipe!
26 July 2009 at 18:14

Jessica@FoodMayhem said…
Wow, that looks and sounds amazing. I love French Toast so savory could be very interesting.
26 July 2009 at 19:40

Sudeshna said…
Kalyan,
Thanks for sharing the link on my blog. This preparation looks yummy and I hope I can keep the yolk, because I just love eggs and don't wanna waste any part of it :).
24 August 2009 at 20:35

Amrita Amesur said…
This exact same thing, is what I grew up on in Bombay. except we mix the vegetables with the egg mixture and not sautee it separately.
For some reason, we Sindhi's called it Cutlet :P
25 March 2012 at 21:40

Amrita Amesur said…
And also, your blog site is rather heavy and takes forever to load ( on my pseudo internet) so would you mind toning it down a bit so that us unfortunate ones may be able to read your posts?! :)
25 March 2012 at 21:42

Kalyan Karmakar said…
@Amrita, didn't know about the Sindhi cutlets. Poor cutlet must be schizophrenic given its many renditions

thanks for the feedbakc...the temptation to put in high res pics knocks down the speed I think...will revert to lower res perhaps.
25 March 2012 at 23:20