on July 08, 2009
I normally wouldn't like to berate one of my favourite joints. But Basilico at Pali Naka did badly let me down last Friday night. And it's not funny when you have paid a good Thousand Rupees (20 USD) or so for two.

Actually I was supposed to make bhapa eelish (steamed hilsa) after work. But both Kainaz reached home very late as we had meetings which ran well into the evening. To top it, my car's battery died as I left the headlights on and we managed to get is started after half an hour's help from my boss, his driver and some of our colleagues.

K and I were quite tired by the time we returned home and decided to go out for dinner.

I suggested Basilico. We sat in the open section, with the large plants strewn around, which was quite scenic in the rain. The rain sounded lovely too and I looked forward to a great dinner.

We shared a black current soda which was nice - sharp, not too sweet. We had a mezze platter with it. The aubergine mint dip was sweetish and nice and the cream cheese dip was to die for. The range was a bit limited in comparison to Out Of The Blue. The lavash and soup sticks were a bit monotonous and some pita bread would be nice.

We were still enjoying the appetisers when the waiter came with the main course. I sent him back and asked him to get them when we were ready.

The food, when it came, was quite disappointing.

I had ordered a canaloni tube pasta with goat cheese and mushroom. I had visions on tubes of pasta filled with lovely, crumbly goat cheese like I had in Turkey. What we got were three pyramids of a tough pasta casing, stuffed with lame chopped mushroom with a bit of cheese coating on the top. Very tough and disappointing. 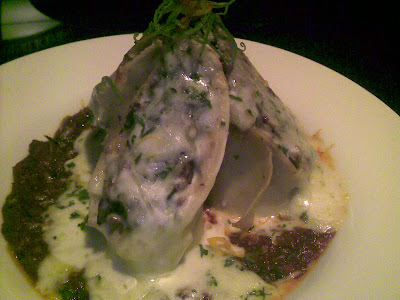 As I told K later, evolved pasta seems to be an acquired taste which we haven't acquired. I remember that we diddn't like the ravioli at Mariott or the 'hand made' pasta at Mia Cuccini. Good old penne, fusilli and farafelle work for us.

We had a rosemary braised chicken too. Presentation was nice. Meat was very tough and harder than a soldier's shoe. The sauce was fairly uninspiring. 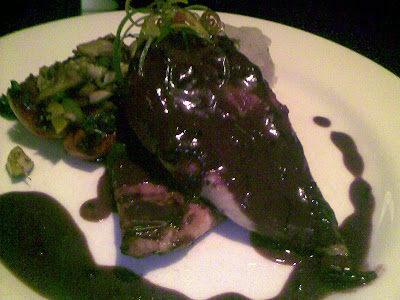 We left both dishes unfinished. Which says it all

So net score, presentation was good, food sucked... as did the service. I left a comment on their feedback form about the importance of serving the main course AFTER folks have finished their starters.

I maintain that Basilico is a nice place but I must order more carefully the next time. Plus I have found their service to be a bit limp and uninformed in the past too.

Some sure shot things there are their pastas, Moroccon broths, beef roulade and just about any dessert.

And you now know what not to call for!

Just call me 'A' said…
oh..bad food is just just terrible...it's spoils a good evening and maybe the stomach too.
I don't eat Ravioli because it has quite a bit of egg on it but i do like home made pasta if well done. for once I did not feel hungry looking at the food and reading this :D
8 July 2009 at 23:42

Magical Homes said…
strangely i had a bad experience here the first time i went there too. The guys are of no help....can't suggest the food at all; and it was noisy and no music either...all in all, i didn't really have fun.
9 July 2009 at 12:56

Kalyan Karmakar said…
Hey A, I guess my cell phone camera is very choosy about food :)

Hi, MD ... I agree on the guys being of no help. And they can't be complacent at a place like Bandra where you have Out of The Blue and salt Water Cafe in the same price range with better food and staff who know their stuff... Funnily Basilico is still full most of the time ... and to be fair they have their good points but you either need to know your stuff or not know... if the latter, then you don't know any better... btw their bread sucks. Bought a baguette once. Couldn't eat it the next morning. They should go to Candies to get trained
9 July 2009 at 13:23

edenist said…
Made the mistake of going to Basilico and ordering an eggs benedict.... the hollandaise was foul and the spinach tasted of corrugated iron.... never again. Oh yeah, the "drinks" reminded me of poor quality gola sherbet I used to have outside my school compound :p
10 June 2010 at 15:54

Kalyan Karmakar said…
@edensit thanks for writing in. I had not gone there since I wrote this. Seems like things haven't changed
10 June 2010 at 15:56

K said…
Basilico was disappointing last when i visited. Miniscule portions and okayish food. The staff was very indifferent too...the iced tea was superb though. perfectly done...but just that...the cheesecake (supposed to be the star dessert) had a coconutty base...disappointing...theobroma does better cheesecakes
11 December 2010 at 21:24