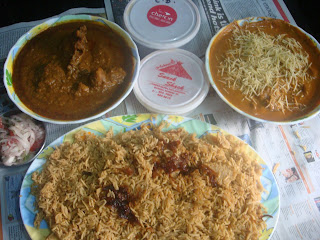 My Parsi (and only) mother in law often complains about the contestant in Kaun Banega Crorepati (Who Wants To Be a Millionaire) who didn't know that dhansak was a Parsi dish.
The Parsi community is a fairly small one. I don't think there are enough Parsis in India to fill up Eden Gardens (a cricket stadium in Calcutta). So many would be unaware of the culinary treasures of this quirky community. But those who know of Parsis, and there would be many in Mumbai, would know that Parsis love their food. And it's not just dhansak but quite a few other dishes such as patrani machhi, farcha, lacy cutlet, custard and sali boti which are legendary too.
Strangely enough, Bandra, which is a hot bed of restaurants, doesn't have a good Parsi restaurant. Lebanese, Thai, Italian, Japanese, Mexican ... yes. Parsi? No.
There are quite a few Parsis who live at Bandra and there are a couple of Parsi colonies too. Yet the famous Parsi restaurants, Britannia (only lunch), Mocambo (only lunch), Paradise (I have never been there), Jimmy Boy (great memories but apparently down the drain) are all at the Fort area in extreme South Mumbai. It is as if the community which built South Mumbai never look bothered to look down to the burbs.
The closest to a Parsi restaurant at Bandra is Snack Shack at Pali Naka. they have four tiny tables under an awning. They home deliver too (26005010). Their chicken cutlets are pretty good, the filling is squishy and is a big hit whenever we have guests over. Their fare is slightly limited though as they have different dishes on different days of the week. As far as I remember it is dhansak (well made and very tasty) on Sunday, pulao daal (again very good but very little daal) on Thursday, Patrani Machhi (passable, Mamma used to love it) on the weekend, you get the idea. Snack items like cutlets, farcha, custard, sali par eendu (I prefer Kainaz's, she loves their's) and sali boti ( a bit sweet.. I like them, Kainaz doesn't, my in laws do) are there everyday. They serve sandwiches as well and my father in law is a big fan of their Club Sandwiches.
So what do you do if you want dhansak on a weekday?
I had some friends coming over the other day and one of them is a Parsi food fan. He is a Maharashtrian who grew up in South Mumbai and now misses Parsi food in Dubai. 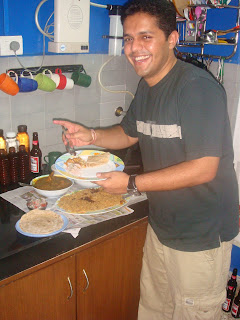 I found out about this place called Cheron at Hill Road. You get dhansak and other non Parsi dishes there. It is a takeaway joint. Their dhansak was very substantial (more than Snack Shack's). Kainaz really loved it. That's the true test. For whatever its worth, my friends liked it too. But they were in their old boss' house. 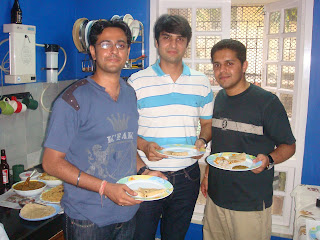 The only problem was that we ordered chicken dhansak and each portion came with one big chunk of chicken on the bone. This is a problem if you have guest. Snack Shack's comes with smaller pieces. I think Cheron has a 20 % discount after 8 PM.
There is also a RTI outlet at the beginning of Turner Road at the Parsi Colony there. RTI's quality and taste is a bit inconsistent to put it politely.
Another very good Parsi option if you are entertaining at home is Elphinstone Club at Sterling, South Mumbai. They deliver home if you give a day's notice, pay cab fare and the order's five hundred plus. But their dhansak (very venerable), patrani machhi (best I have ever had and yet so cheap) and chicken farcha (so succulent that people are still raving about it) are show stoppers. They send the food in a container and you have to unload it and give the container back. Let me know if you are interested and I will mail you their number. They deliver to non members too.
Here's hoping that one day we will be able to chant the Parsi war cry jaamva chaalo ji (let's go to eat) and walk into a good Parsi restaurant at Bandra.
Watch this spot for my laments on the lack of Bengali restaurants in Bandra.
Note: Most dishes mentioned at Snack Shack and Cheron are less than Rs 100 (2 USD) each. The stuff at Elphinstone is very reasonable too for the quality and the portions are as a big as a Parsi's heart.
Bandra Bites Parsi food - the better half Woes

Kalyan Karmakar said…
These are kaati rolls from Kolkata. A popular street food there. Thin parathas, stuffed with greasy kebabs, fried onions, chopped chilles, dash of lime and rolled... this is from a Bengali shop in Mumbai! I believe that there is a Bengali couple with a cart that sells rolls in NYC
31 July 2009 at 13:31

Pinku said…
have to agree the header photo is delicious....and i always feel like running towards CR park when i see it.

the parsi spread u mention sounds so very yummy...

the bong food in a restaurant syndrome never has quite worked for me beyond the radhabolobi aloor dum routine.

Had dinner at Oh Calcutta last week and was quite disappointed. and that apparently is the best in delhi.
31 July 2009 at 15:10

Manasi said…
Hey Knife, I'm really curious about Parsi food but haven't read much beyond the dhansaak and patra ni machi(did I get that right)...mind obliging us with a post on that?
1 August 2009 at 03:31

agent green glass said…
ummm...yhe kathi rolls look yum. and ur blog is sooo dangerous for someone with a dicey stomach. but thank you, will be visting cheron soom. i am a glutton for punishment : )
1 August 2009 at 17:15

Kalyan Karmakar said…
Pinku, I believe is far better Bong accessorised than Bombay. Incidentally these rolls are from a place called Hyangla in Bombay.

Re Bong restaurants - succour for Bongs living alone with no kitchen or not knowing how to cook. Oh Calcutta is not all that bad. Try luchi, kosha mangsho, bhetki fry, chholar daal there.

Manasi - will do soon. Been ages since I've gone to a new eating joint. So features and recipes galore in the blog

k said…
thanks to the work schedule lately, even the parsi wife is not easily available in bandra
2 August 2009 at 00:11

arZan said…
Cheron is a very famous Parsi caterer. They do amazing buffet spreads. They did the one for my engagement in 2006, and we regularly order food from them for parties etc.
7 August 2009 at 08:57

Kalyan Karmakar said…
Hey ArZan thanks for dropping in. That probably explains why Cheron is so good. They were very prompt when it came to delivering
7 August 2009 at 12:39

Sayantani said…
Hi...loved your posts on Parsi food.there's another tiny lovely place called By the Way in Nana Chowk (next to Seva Sadan) which serves yummy Parsi food. Their Patrani Machhi is worth trying. Maybe you could check it out :-) And thanks a ton for all these Parsi options in the suburbs...it really is a pain to have to come to town on a weekend only because you want Parsi food.
1 September 2009 at 13:50

Thanks for dropping by. Would you believe it if i tell you that I ate at By The way for the fist time yesterday.

S said…
wouldn't be really surprised...it is one tiny non descript place...i went there only recently myself...and what totally bowled me over (apart from the amazing food) was their tiny but really nice collection of hand made stuff...lovely gift stuff. look forward to your post on that one.
18 September 2009 at 22:01

Anonymous said…
Ur worry has been heard. Now derz a parsi restaurant @ Bandra called Jumjoji.. Near Lilavati..
27 February 2012 at 21:09