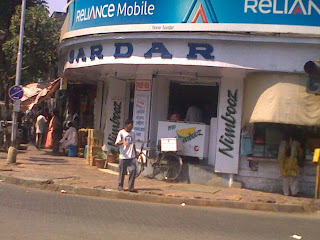 The ingenuity and enterprise of New Sardar , the restaurant close to my office at Chinchpokli, continues to amaze me.
I was quite fed up with the cold dosas which my office canteen served. They claimed that it would get cold while getting it from the first floor to the second. So I ordered an idli from New Sardar which is actually down the road. They delivered this puny (Rs 18/ 20 cent US) order in five minutes. Piping hot. This morning I missed breakfast at home and felt like having the Maharashtrian dish of Misal Pao. This is a slightly messy thing to order in, specially if you don't have plates or bowls, as it consists of a pulse (matki in Marathi and Moth beans in English as Manasi tells us) and gravy, farsan (gram flour fritters) and bread. I called Sardar who had won an award for the best Misal Pao in Mumbai. They sent it in five minutes, piping hot, in a tiffin carrier with individual carriers for the components AND a spoon. And took it back when I was done. 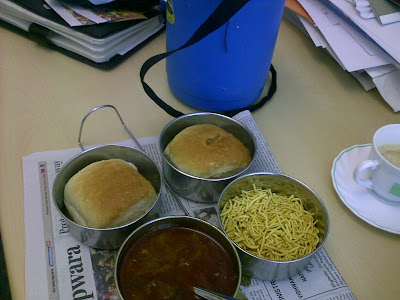 Now that's what I call customer service.
Frankly, I shouldn't be surprised though. I happened to meet the owner, Vivek Prabhu, one day at the restaurant. Vivek is a C A by training who took up the responsibility of running his family business. Vivek spoke to me at length on his efforts to contemporarise his restaurant. He caters to a mix of up heeled executives to daily wage earners and needs to have a range which appeals to both. So you will have a nice, refreshing ice tea co-existing with an ethnic butter milk or chhas.
Vivek is a South Indian but Sardar is known for its Maharashtrian food. However it is located in a locality, Chinchpokli, which has an increasingly non Maharashtrian clientele. Vivek tries to keep up with this trend by innovating and introducing fancy sandwiches and garlic bread and fasting food. He is particularly proud of his garlic dosa which he claims to be the only garlic dosa in the world. I have tasted it and found it to be pleasantly buttery with a subtle garlic taste. Vivek pointed out that most other fusion dosas fuses the South Indian dosa with other cuisines - spring dosa (Chinese), Palak dosa (Punjabi). Garlic dosa is the only one which uses a predominantly South Indian ingredient - garlic. 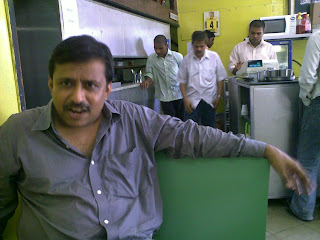 Well as you see Vivek is proud of his restaurant which is named after a title, Sardar, which his grandfather got in his village years back. He loves to talk and you have to keep some time aside if you happen to chat him up. But I would strongly recommend that if you like men of food.
The fare at my office canteen seems quite unappetising today. So I have ordered a masala dosa from Sardar.
Food musings Mumbai highs People South Mumbai

Pinku said…
Please tell the guy to have a branch in delhi, in nehru place. Please.....I could do with some misal pao. Does he make that yummy dal khidchi too??? Never found it outside of Bombay
21 July 2009 at 15:35

Anonymous said…
Come on scarlett give the knife a break after all Sardar is not only unique but different
Do i detect a tinge on envy that you are not able to patronise this place now?
21 July 2009 at 23:01

Manasi said…
Hey Knife, Misal is not made with chickpeas...its a bean called Matki in marathi and Mothbeans in English. Are you back on your feet now?
22 July 2009 at 07:11

Kalyan Karmakar said…
Hey Pinku...he has just opened a more Western veg place called Viva next door but Delhi will have to wait. Nothing like misal pao in the rains
Hi Scarlett...now he will get sleepless nights again :0
Hey Moonshine...just call me Santa Claus
Hey Anon...don't... as it is the poor girl misses Bombay so much :)
Hey Manasi...thanks made the change... am flat out at home but upright at work
22 July 2009 at 14:38

Pavan said…
Is this Sardar a branch of the one at Mumbai Central? Or is that a Sardar Pav Bhaji and this one only Sardar? Am getting confused...
22 July 2009 at 16:49

Scarlett said…
@Anon - Please take Knife's advice and cut me the slack, would you? I have a feeling that the 'Sardar' guy has either paid you off, or you're him yourself! LOL...Trust me, I have enough reason to cringe when 'Sardar' is mentioned. There is no trace of envy whatsoever :)

Miri said…
Sigh....how I miss Mumbai. in Delhi, if they serve you, they are doing you a favour! And God forbid, if you are not one of the blow dried, crystal studded sunglasses wearing people with layers of make up - NO service is what you will get!
22 July 2009 at 20:44

Kalyan Karmakar said…
@ Miri...that's why I love Bombay (can never think of it as Mumbai) ... especially after churlish Calcutta. Delhi is all 'ho jayega' and no substance. There let me duck for cover now...
@ Pavan...no this is different from Sardar of Sardar Pao Bhaaji. This is the only lunch bucket near Nielsen
@ Scarlett...actually I am not fond of anonymous jibes... they rank right up there with the Japanese escort service spam which I've been getting recently. I had to enable comment moderation again because of that
22 July 2009 at 22:57

Ankan said…
WOW! I always wondered why you haven't written about this place already and it turns out you already did! but before i started following your blog :p Sardar honestly is a life saver! THeir food is close to home cooked food and the quality never goes down - right from the wonderful garlic dosa to the idli vada or the misal pav. The best part being they deliver quickly and i need not worry if i didnt have breakfast or not carry lunch. They deliver Kokum sharbat as well :p - I was introduced to Sardar by my wife Maithili - Sarder used to be the Sundayt eating out place for her mother during her childhood at Cotton Green. I somehow have one thing common between my favourite places - they are all restaurants by the road with a window view - Sardar, Moshe, Gostana, Flury's, Busaba, Mocambo, Bar-b-que and many more :D
6 July 2011 at 19:17