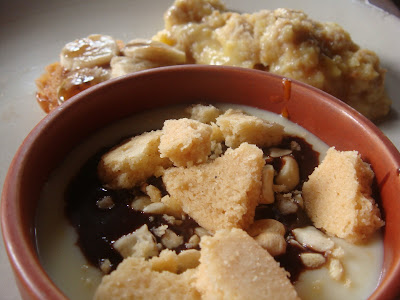 As you probably know by now, I was at Goa this weekend!!!!

Kainaz and I were in this dreamlike hotel in secluded side of South Goa. The weather was wet and romantic. The sea was tempestuous. It was green and serene all around.

And my thoughts turned to food.

So I first conjured Calcutta's phuchkas at Goa and then created the mango shreekhand sundae.

I fell in love with this sweet, clammy, sourish, yogurt based dish from right from the first bite. And have always asked for seconds and fourths since. Shreekhand is very viscous and one can take a spoonful and let it melt in one's mouth over half an hour. All right, that's an exaggeration but I am taking of some seriously sweet stuff here. While it is made from yogurt, it is a lot thicker than the Bengali mishti doi.

The buffet at the Park Hyatt at Goa had a mango (flavoured) shreekhand one day. I decided to add some chocolate sauce, chopped peanuts and crushed cookies which they had kept in the ice cream counter at the spur of the moment.

The result was quite divine. Shreekhand is very sweet and yet tangy. The chocolate sauce got in a sense of reason in it and broke the sweetness. The peanuts gave a nice crunch to the combination. The crushed milk cookies added a more sobre, milky sweetness in comparison to the wild taste shreekhand and seemed to hold the whole dish together.

I love shreekhand and can have it by the spoon till I explode. And you don't need too many spoons for that. But I found the Sundae version to give many more layers and character to Shreekhand.

"Worth repeating" as my Mom in Law says when she likes something.

Shreekhand, chocolate sauce, milk cookies, peanuts are easily available in Mumbai and you could try this as a dessert option when you have guests.

By the way, any idea whether Shreekhand belongs to either Maharashtrians or Gujaratis?

The dish in the back ground in the photo is a muffin pudding. This was an interesting bready pudding with layers of preserved tangerines at the base. I guess someone at the Hyatt kitchen had a hyperactive imagination too.