on July 03, 2009
It's raining right now. I can't begin to describe how wonderful it feels to listen to the sound of rain while one writes. Specially after a lovely dinner of paloker chochcori (A sort of mashed vegetable dish with spinach, pumpkin, brinjal, potato, bitter gourd which I picked from Sharmila's blog), rui kalia and rice. Heavenly!


I normally don't do the five star circuit too often. In fact as a friend pointed out, you often get much nicer meals at small, standalone restaurants. Still I feel that a five star helps add to an occasion. We had one five star occasion recently and I piled on K to treat me at one .


So Kainaz and I headed for India Jones at the Trident (earlier Oberoi) at Nariman Point. This was a last minute choice based on a suggestion from Serendipity.


India Jones is a concept restaurant where the theme is Far Eastern. It has food from nine countries and the menu is based around the travels of a character called Bharat (Hindi for India) Junes (I think). The idea is good as it give folks a chance to try out different cuisines.


The ambience was very peaceful and quiet and understated. In fact the odd SMS beep was quite irritating and broke the mood for me. The head of one of India's largest private banks was having dinner a few table s from us. A Japanese lady was tucking into some sushi in the table beside us with a fairly contented look on her face.


The food was nice. Not earth shattering. I have had had better Oriental food at the Global Fusion hog fest or the more serene Royal China.


But what I will remember most from the evening was Edgar who was looking after our table. Edgar, had a big round smile at all times, took our order with a lot of interest and care and ivolvement. I asked him to help us out as their was a wide array of dishes. My brief was 'something different'. He earnestly put us onto a snapper and prawns cooked in a Singaporean chilly paste and a noodles cooked in basil with prawn and chicken. The latter came with flat noodles which we aren't fond of so he promptly changed to regular noodles. Then he giggled and told us about how the chefs often got angry with him as he asked them to customise dishes for guests (e.g rendange made with vegetables instead of beef for Gujaratis) . We then chatted for a while on food as he told me about the concept of the restaurant while I told him about my food experiences in the far east. His love for food was apparent. As was his love for, and pride in, India Jones. He told me about his dreams to open a restaurant in his native Goa. Which is my dream too. Though I doubt if he plans to open a Bengali restaurant in Goa! 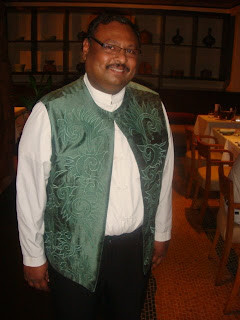 The food was really good. The snapper tasted great and was healthier than the usual pork or prawns that I would have gone for. The sauce was slightly sweetish and a bit tangy. It did meet my brief of 'something different'. The prawns and snapper had a slight buttery bite to it. The noodles went pretty well with it. 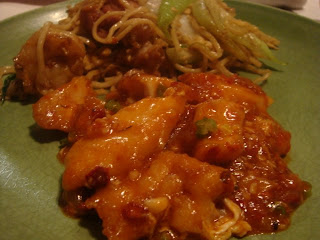 I was in a dilemma for what to have for dessert. Edgar suggested that I have the chocolate pecan dome with blueberry sorbet and green tea shot. He said that the pecan dome was his favourite. I generally tend to go with the flow if someone passionately recommends a dish. The pecan dome was exquisite. The texture was lovely, mashed ecstacy with the odd pecan nut and gave in dutifully and obediently with each bite. The chocolate was dark with a pretty high cocoa content I am sure.


I don't like bitter chocolate. I believe that desserts should be sweet. So this was not up my street. But I am quite sure that chocolate lovers will lap it up.


I saved the blueberry sorbet to have after the dome and that was just what I wanted. Sweet, tangy and cold. The green tea shooter was nice too, it had the texture and sweetness of a banana shake with a delicate flavour of green tea. 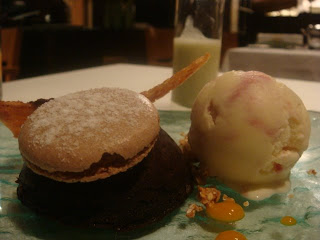 I had a bitter orange juice which was nice and had fruit pieces in it. I didn't drink as I was driving back. Kainaz had an apple ice tea which tasted like Tropicana apple. I guess non alcoholic drinks are quite lame and not worth the prices that restaurants charge.


Two soft drinks, a main course and a noodles and a dessert came to all of Rupees two thousand five hundred or so (50 USD) which I thought was fantastic for a five star. You could easily run up a higher bill there BUT you also have the option of having an affordable meal which is great if you are young, want to have a classy dinner, but don't have a rich uncle.


Trident was one of the two hotels attacked by the terrorists on 2611. The day we went, the Trident was shining like a princess, a fitting rejoinder to those who tried to attack it. A lot of innocent blood was spilt by the terrorists that day. But as Edgar's smiling face will tell you, they did not win.
Mumbai highs Oriental People South Mumbai

Manasi said…
I love dark chocolate, the higher the cacao, the better. Having said that, I agree that desserts should be sweet. Look like it was a fantastic dinner. If/when I come to Mumbai, I'll be taking a list from you.
3 July 2009 at 03:15

Jessica@FoodMayhem said…
I love dark chocolate too, although there is such a thing as too bitter. It all depends on the quality.
3 July 2009 at 03:41

Sharmila said…
I don't like sweets and often do not go for desserts .. unless it is a icecream sizzler ... am a sucker for that. :-)
But I do like flat noodles. Am wondering about that 'buttery bite'. Thanks for mentioning the chorchori and the link. Am glad you liked it. :-)
3 July 2009 at 10:30

Pinku said…
ur blog always make me a) hungry b) pine for bombay...

Kalyan Karmakar said…
Jessica, Manasi ... I think its a guy girl thing. Women love dark chocolate. We are simple uncomplicated folks and like our desserts sweet :) It wasn't too bitter. I think it was quite deep and robust

Sharmila: Should I say lucky you? Like camels I have a separate compartment in my tummy for sweets

Pinku: with the rains this is the place to be in. Sharmila's chorchori recipe is great. I had it over two meals last week and ditto this week.

Kalyan Karmakar said…
Hey Serendipity...I had enjoyed the food :) In fact there were som amny godies that I din't know what to pick. It's just that I have had better
3 July 2009 at 16:03

Gaurav said…
i havent been to India Jones in a long long time... but i have fond memories of it.

My brother Sanjiv Malhotra who was the general Manager and chief architect of India Jones and Frangipani will be delighted with fondness the people like Edgar have for the brands created Them. I continue to enjoy reading your updates.
Warm regards,
Samil Malhotra
Soldier of fortune
www.samilm.blogspot.com
10 July 2009 at 11:43

Thanks so much for writing in. Please pass on my compliments to Sanjiv on a wonderful job done. To put up a good restaurant is one thing but to have built a team of folks who make you feel special is very, very rare.