Off with his head ... Persian Darbar, Byculla

on July 08, 2009
It was Friday and one's always in a playful mood with the weekend coming up.

We didn't feel like eating the canteen food. So four of us headed to Persian Darbar at Byculla.

Persian Darbar (P D) encapsulated all the values of secular India. It is run by Muslims. And is located just before a majestic Catholic Church and a Parsi Colony. I got excited when I saw the place as the layout - non air conditioned section at the ground floor with a little, air conditioned, 'family' section above it - reminded me of the legendary Muslim restaurants of Calcutta. Nizams, Zeeshan, Shiraz, Aminia. The joints in Calcutta were famous for their ethereal biriyanis.

P D raised visions of these in mind as the four of us went up to the, marginally more expensive, air conditioned section.

We started with a crispy chilly chicken. Frankly I don't know why we ordered Chinese in a Muslim joint. But strangely enough, that was the only good thing that we ate. After all, how wrong can you go with chicken doused in ajino moto, chilly sauce, painted red, doused in batter and deep fried? 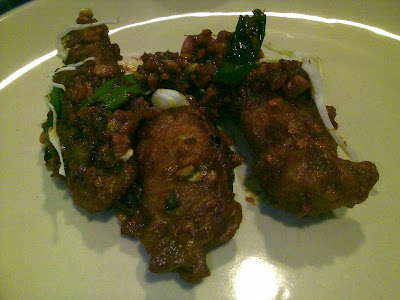 We then had butter chicken with roomali roti. The roti was nice and soft. The thing about Butter Chicken is that it tastes different in every restaurant. The best ones that I have had are at Delhi where the chicken is juicy, the gravy is in the sweeter side and is redolent with wicked ghee and butter.

And the butter chicken at Persian Darbar?

The picture below does full justice to the gruesome butter chicken in P D. It was salty as hell. Redder than the gaudiest polyester. The sauce reminded me of the debris of all the construction work going on nearby. It had thin strips of chicken which were harder to find than a road without traffic in Mumbai. 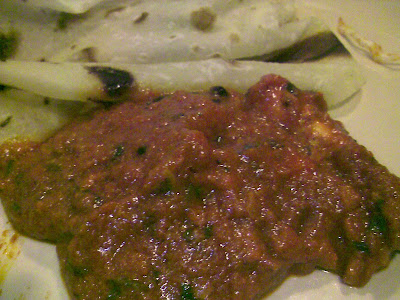 Chicken tikka biriyani followed. Biriyani in the Muslim joints of Calcutta is a delicate, subtle affair, coy as a celestial virgin... those of us who are from Calcutta cherish the memory of its biryani.

The briryani at P D was deceptive and my hopes soared as I saw the beautiful rice an top of the dish ... it looked angel white and tantalising. Then I took a bite and realised that under the rice was the same angry, red chicken goop that passed off earlier as butter chicken ... salty, gaudy with pebble like pieces of stale chicken. Paradise lost and how. 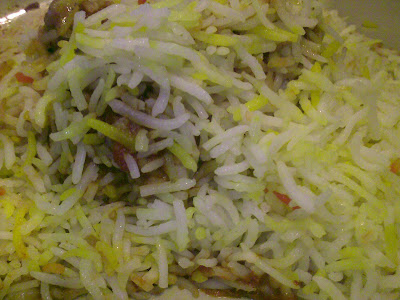 We shared a caramel custard and a regular custard, which were passable but not up to Noorani standards, and ran like hell.

I doubt whether I will ever go back to Persian Darbar.

And I can't see any Persian Emperor tolerating such barbaric food.

Damages? About Rs 200 (4 USD) per head for four of us - 1 starter, 2 butter chcikens, a few rotis, 2 biriyanis, a few soft drinks and two desserts. We all felt that it was money down the drain.
Indian food Mumbai lows South Mumbai Woes

Jessica@FoodMayhem said…
The butter chicken does look like nasty slop, but you can't go wrong with fried chicken.
8 July 2009 at 01:38

Scarlett said…
Whoa! We used to go to Persian Darbar all the time & the dishes you mentioned were our favorites! We loved their Butter Chicken & the Chicken Tikka Biryani, so either they have really messed up their dishes in the one year I've been away, or we don't know what good food is! LOL :)

Kalyan Karmakar said…
@Jessica... Mc Donalds got it wrong with their nuggets though. KFC is better there

@Scarlett...I guess the debate of cal versus non Cal biriyani is eternal. My mom in law is another person who prefers the curry rice they serve as biriyani here... but wihin that Lucky and Jeff are much better.

I know P D is quite popular with folks at work. But all four of us disliked the food. And only two of us were Bengalis :)

Small confession, even I find the Cal biriyani a bit dry these days and prefer a side dish such as chaap or rezala with it ;)
8 July 2009 at 17:33

Kalyan Karmakar said…
Hey Manasi...thanks a lot. One of the reasons I started food blogging was because of the vanilla stuff in Indian telly on food and travel. Nice link
9 July 2009 at 19:18

Unknown said…
Couldn't stop myself from entering the biryani discussion between Knife and Scarlett and so the comment... :-)

Am assuming Scarlett is originally from Mumbai like me and I guess most of us who have grown up in Mumbai have developed a taste for 'wet' biryanis since childhood as opposed to the 'dry' ones as in Kol and so the difference of opinion and preference, which is fair :-)
10 July 2009 at 12:26

Kalyan Karmakar said…
LOL Kashi...I must warn you that we Bengalis are fairly chauvinistic when it comes to our food and your comments on biriyani could set off huge revolutions or mass demonstrations in the Brigade parade Ground. (our version of Azad Maidan).

Must drum up some Bengali support here

By the way, did you know that they use coconut milk and grated coconut for biriyani down South?
10 July 2009 at 17:06

Pinku said…
two bad food posts!!!....u must be feeling really let down by the bombay joints...

I am a bong and can vouch for the biriyanis of calcutta and delhi....have never ever had a decent one in mumbai...

the worst one i remember came as fresh onion over a layer of white rice over a bed of lamb in gravy...

Good biryani seems an elusive item nowadays...and like a good South Indian, I love the Hyderabadi Biryani which isnt too dry! ;)
11 July 2009 at 15:53

Kalyan Karmakar said…
Hi Miri, i think they use canned tomato soup in the UK! The Cal biriyani is from the Lucknow gharana... and started when Tipu Sultan came to cal or the Nawab of Oudh... they added potatoes to biriyani in Cal as they didn't have their nawabi riches when they came here and couldn't afford meat. I think Chitrita Banerjee wrote about this in Eating India, a wonderful book
16 July 2009 at 01:06

Intrepidgourmand said…
You did not eat the right things at PD. Who eats a Chicken Tikka Biryani anyway? ;-) That is a monstrosity anywhere!
What you must have at PD is the Raan. We go there just to eat Raan and Butter Naans which they do really well. I much prefer the PD Raan to the more famous one at Shalimar.
19 January 2012 at 09:35