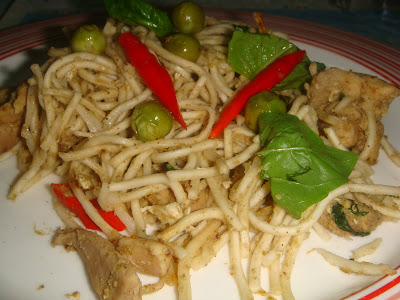 Don't you love it when you get an idea for a dish, improvise on the way and end up with something lip smacking at the end of it?
Well here's the story of Sukhumvit Wok, which I named after the busy central district of Bangkok where we had a lovely holiday a few years back. And some great food.
I bought a pack of green Thai curry the other day from Pali Market at Bandra (Rs 30, 0.6 USD). Both K and I are big fans of Thai green curry. I toyed with the idea of something different with it rather than adding coconut milk and make a curry out of it. I toyed with the idea of making a hakka style noodle out of it. A different take and good for those who, for some strange reason, don't like the nectar of the Gods, coconut milk.
I then decided to go the whole hog and went to the market and picked up Thai ingredient such as Thai Brinjals (very pungent and I earlier though they were chillies), bird chillies and basil.
It all came to me as I began cooking. I merged Thai ingredients with the Chinese hakka genre of cooking. The end result was another Karmakar Original.
Ingredients: 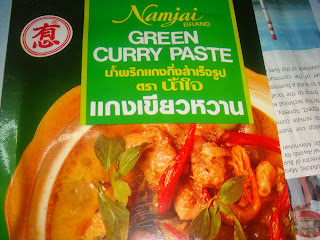 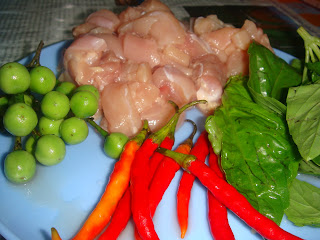 Home Cooked Oriya Food said…
Why does everything have to be home made ? I think making it your own along the way and having a yummy dish is what counts! I am sure you had fun with the thai style noodles...
7 July 2009 at 02:34

Manasi said…
This is so bookmarked! I toss in the Thai/Chinese powder soup mix in my egg noodles. Adds so much flavor.
7 July 2009 at 06:26

Scarlett said…
I made Thai red curry with the same Red Curry paste & it turned out decent except I couldn't find coconut milk in the market so I had to use coconut milk powder & that made the curry really thick.
7 July 2009 at 12:33

Hey Manasi and I've seen Brit chefs use Campbell soups for their butter chicken. Actually saw a chef in a delhi restaurant in telly use ready made Thai paste in a fish dish

Hey Scarlett... i thought of you when i wrote this because i thought u don't like coconut milk :) Cal is a bit distributionally challenged in life

btw Mr sardar wanted to know who is 'Scarlett' :)

@Jessica ... the place where I stay, bandra, has folks from all places inlcuding expats and is quite well stocked. I am on Thai brinjal fest right now - tossed some with pumkin, bird chillies and basil as a sandwich filler
7 July 2009 at 18:27

As for Cal, it's 'very' distributionally challenged, not a little. Most of it has to do with the non-cosmopolitan nature of the city. No offence to you or any other Bong reading this, but I think there are very very few Bongs (at least among the ones living in Cal) who can think beyond fish & alu bhaja - which explains the non-availability of ingredients used to cook international cuisine & also the lack of good non-Indian & non-Chinese restaurants in the city.

AND I can't believe that Mr Sardar of all people reads your blogs & asked about me! Hope you didn't tell him who Scarlett was, did you? Hahahahahahaha :D
8 July 2009 at 11:22

Kalyan Karmakar said…
@Scarlett... coconut milk give a nice, balmy feel to Thai currie or even Indian one's like moily. I think the excessive spice or grated coconuts used in indian curries kill it at times.

I am not sure about the non-experimental part...I guess its true to an extent but consumerism used to be weaker in Cal and people were more into savings than spending.

I remember travelling miles trying to buy Tropicana for K when we to Cal after our marriage.

Mr Sardar had read my blog. I gave him a copy. He treated me to a garlic dosa and an ice tea, i was through with lunch, and is waiting for me to write my next post on Sardar.

Kalyan Karmakar said…
Hey T, thanks a ton, specially since I write most of them when the copy machine is alseep and I am half asleep.

RShan said…
Very very nice....and yes - food of the gods is an apt description for coconut milk. If you have tried making Thai curry paste from scratch (you can make a large quantity and freeze it!) I guarantee you wont come back to this :)