on August 30, 2009
Warning: Self indulgent and loooong post ahead... patience would lead to some food news too
Yesterday was a day of discovery, joy, great food and happiness. In fact a colleague told me that she'd never seen my smile so widely before.
Just to give you a bit of a context, I am a market researcher by day. My job involves looking through data and trends and giving solutions to clients, leading a team and getting business for the company. Very different from my other personas of a food blogger and cook. Yesterday I got to stretch my 'other side' a bit more.
I had recently worked on a research paper with a colleague which was selected to be presented for the World Congress of Esomar, a central research society in Switzerland next month.
I decided to create an AV (audio visual) for the presentation. AVs are tiny little films used in presentations and are made dime a dozen by folks in advertising. Not my playing arena though. So I had great fun thinking up of the concept, the situations, the movies scenes I would source stock from and the music track. Of course I had the advantage of a professional writer at home in K. Still I felt very tickled about doing this otherwise mundane thing. A bit like a chef doing a flower arrangement if you know what I mean.
Yesterday my colleague Ips and I hit the studio where we edited the film. It was a completely whole new experience seeing this film come alive. I was feeling quite film directorish taking calls on how to put the film together. It really felt like seeing my baby come being born as I saw our ideas take shape into a two minute film. Boys will be boys did I hear you say?
As we were reaching the end of our work, my colleague Ips, suggested going to Oh Calcutta for lunch. By now I was seeing myself on the Oscar stage (I've always been a day dreamer) so it seemed right to go to a restaurant which had photos of Bengali film makers such as Satyajit Ray and Mrinal Sen.
It was close to 3.30 PM and I called the restaurant. They said they shut at 3.30 PM. On my earnest request in Bengali they agreed to extend the last order time till 3.45!
The two of us rushed in. We were seated in the dungeon as the restaurant is still being renovated. So no pictures of my 'fellow' Bengal film makers.
We gorged on the usual favourites of the crisp outside, tender inside bhetki fish fry, luchi (which were very nice and fluffy this time) and kosha mangho (astonishingly soft mutton). Ips introduced me to one of her favourites shorshe chingri - an amazing dish of six succulent prawns, in a wonderful thick creamy sauce of mustard, turmeric and ground coconut. I had never had this before and I am definitely going to have it again. We were stuffed and yet gamely finished everything as the food was heavenly. And we got a couple of complementary Bengali sweets (sandeshes) at the end after we declined desserts. To think that I had come here less than a week back. That's the hallmark of a great place. 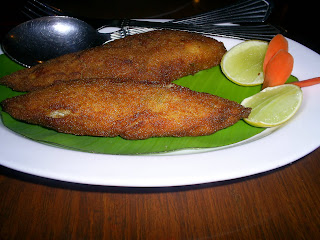 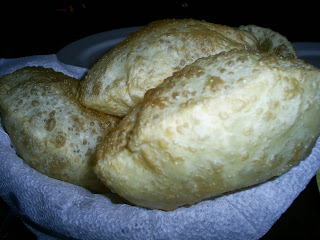 We headed sleepily to office. Soon after we reached Ips came to me screaming in joy. Our research paper had apparently got nominated in the best paper overall category. We were over the moon and couldn't believe our eyes.
As Kainaz said Oh Calcutta turned out to be lucky for us as she won an important assignment earlier in the week after our last meal at Oh Calcutta. And now the news of the nomination! I had used quite a few scenes and a track from Slum Dog Millionnaire for the AV and nearly did some Danny Boyle sort of sky jumps when I heard of the nomination.
Kainaz and I were supposed to go to the Thai Pavilion at night with Jamshed Uncle who has taken us for many lovely night outs. Thai Pavilion is the best Thai place in Mumbai which we discovered the previous Friday. It's expensive but worth every pie. We were looking for an excuse to return. With the award nomination one didn't have to feel like a decadent capitalist with money to splurge. I felt that this meal was well earned.
The meal at the Thai pavilion was another joyous journey of a perfectly fried (Japanese) prawn tempura with just the right amount of batter. We followed this with their signature dish of Thai Roast Duck on spinach. The duck was very soft and pliant. It had bits of fat and was an Epicurean's fantasy. The sauce complemented the meat and didn't over power the duck. We had Thai green curries with prawn as planned. As with the red curry the previous night, Thai Pavilion got it spot on with the green curry too. Expensive but I am sure that the flight to Bangkok for this authentic and creamy green curry would cost me slightly more. Steamed rice is complementary with the curries.
What added to my joy was that they served chopped chillies in fish oil at my request. Jamshed Uncle and I kept emptying this dip into our food. I have never came across this quintessential Thai condiment at Mumbai. I just love the salty taste of a fish oil. It was the boarding pass for my trip to Thailand.
The meal costs us a King's ransom.
But hey I was in a very happy place. 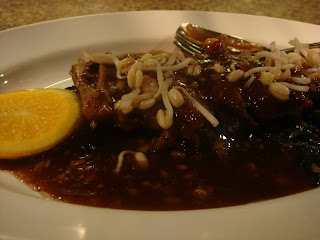 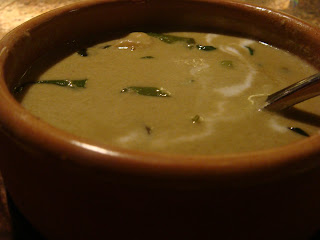 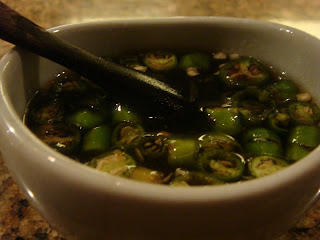 Sharmila said…
OC here has undergone renovation too and is much airier and cleaner .. I love their lawn seating overlooking the river. Congrats on the job! :-) Btw .. I got some great ilish yesterday! :-)
30 August 2009 at 09:22

Kalyan Karmakar said…
Somoo, Sharmila thanks so much for your wishes. I was feeling a bit sheepish to put this up in the blog. But HAD to share it with friends like you.

Sharmila...hope things are better at your end. Lawn seating overlooking the river sounds so idyllic
30 August 2009 at 13:41