on August 21, 2009
I opened my mailbox in office today to see a mysterious mail from my colleague I, which said "what are you doing for lunch today?"

A bit later the phone rang. We have just got some very handsets in office, straight out of Star Wars. The phone sounded like a bull frog in heat. I jumped and scrambled madly till I figured out how to take the call.

I's sombre voice crackled on the line "Can I meet you for five minutes".

I barged in with A and S.

"A and S changed your ring tone yesterday when you were gone and will take you out for lunch", said I

"No we won't" said A and S, looking a bit apprehensive.

"But there's chilly chicken and fried rice at office. I don't want to waste seventy Rupees on bad food" said S with a tearful face.

The three looked at me and said, "It's Friday, let's go out for lunch".

I have long learnt not to argue with the stronger sex and the four of us with a couple of guys from the team, A and T, headed to Pizzeria at Marine Drive.

Pizzeria is the landmark pizza joint at Mumbai which was there long before pizza factories thought up of Frankensteins such as chicken tikka pizzas, kolhapuri mutton pizzas and shahi paneer pizzas.

Pizzeria is THE definitive pizza joint in Mumbai. I remember going there during my first trip to Mumbai in '96 as I strolled Marine Drive with wondrous eyes. There was a buzz which radiated from this cheerful place which just drew one in. The story is the same more than ten years later.

Pizzeria is at Churchgate and faces the sea at Marine Drive. It has big windows through which you can gaze happily into the horizon as you bite into a pizza of art. (very bad pun, apologies!!!).

Mumbai is considered to be the most progressive and open city in India. And Pizzeria represents the best of these values. It has a young, cheerful look which was ahead of its time. The Arabian Sea in front of it invites you to dream on and unwind. The crowd is young, full of life and relaxed. The red and white chequered table cloths are not only cheerful but are also a reminder of Mumbai's heritage Irani cafes. And the pizzas that adorn them speak of a global synthesis.

There have been many wonderful, world class cafes which have burst on to the Mumbai eating scene since the days of pizzeria. But a classic act is hard to beat. 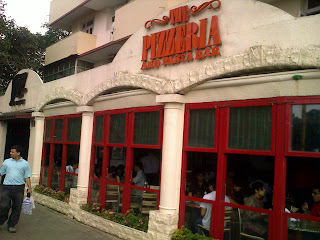 It was a slightly damp and cloudy afternoon and it made the surroundings even more beautiful. Just the sort of thing to set the tempo for a nice, lazy weekend.

We had an All American (pepporoni and cheese) pizza with thin crust. This is the sort of dish which should be followed by a trip to the confession box. How can a pizza be so sinful? So decadent? Take a bite and you will feel like a Roman Emperor in an orgy. The pizza was cheesy and yet creamy, the slices of pepperoni were thin and complemented the cheese mix. It was more like a symphony of tastes rather than flavours trying to outshout each other. It had none of the tomato sauce excesses, sticky cheese dampeners which accompany many other local pizzas. The thin crust which was like a good crust should be 'seen not heard'. It wasn't chewy, it wasn't crisp ... it cheerfully and obediently got the riotous flavours and toppings of the pizza together.

The All American at Pizzeria makes you wonder whether Eve really tempted Adam with an apple. A slice of Pizzeria's All American pizza seems more likely. 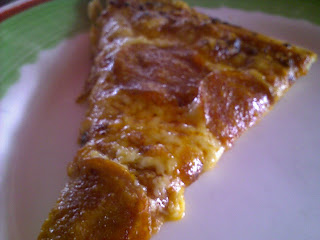 We also had a Super Supremo which had an ocean of meat on the pizza. A carnal fantasy of succulent sausages, heady ham and chic chicken. Once again, the toppings were balanced just right and the crust was delicate and subtle. You didn't have anyone crying out for attention. It was one happy, tasty little pizza.

It is the sort of pizza which would make Joey of F.R.I.E.N.D.S say "How'r you doin?" 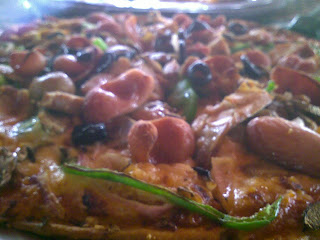 Frankly the All American was a tough act to follow. But then Godfather 2 has it's fans too.

As we left I kiecked myself for not coming back to Pizzeria earlier. Must thank S for suggesting the place. She was the youngest of the group but had a strong point of view on where she wanted to eat.

We were one, happy bunch at the end of it all and ambled down Marine Drive Mumbai's iconic sea front road to the Oberoi Cake shop. After all, as Hindi films have taught us, all good stories should have 'sweet memories'. 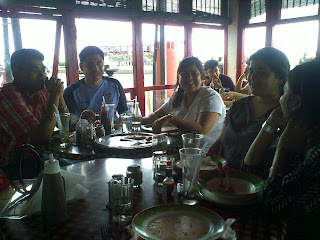 Scarlett said…
The All American looks yumm! I've never been a fan of Indianized 'tandoori chicken', 'Keema do pyaza' etc. sort of pizzas. Trust us (Indians) to know how to ruin all the good things in life! I love pepperoni pizza but sadly not too many places I've had them at make it well. Dominoes definitely doesn't!
23 August 2009 at 14:46

Scarlett said…
We don't. I used to like Smokin Joes way better than Dominos & Pizza Hut. The other day, my sister & I went to Pizza Hut since we hadn't been to one here before & were craving hot pizzas...it was a wet, cloudy afternoon. We ordered a pasta, which was horrendous, and a pepperoni pizza that was served cold. And we ended up shelling out a good 700 bucs for a medium pizza, a simple red pasta & 2 cokes. It was disgusting!!
24 August 2009 at 11:45

Kalyan Karmakar said…
That's sad. You should ask Didi to take it up with the centre.

We occasionally go to Pizza Hut at BKC because of work there. They hardly have any non Indian topping.

Once K and I ordered their then new stuffed crust. Very ordinary, tasteless cheese at the rim.

Incidentally we asked for stuffed crust at pizzeria. They advised us against it saying it's only stuffed at the rim. Really appreciated that
24 August 2009 at 12:06