So I headed to the River Water Hilsa Festival at Oh Calcutta for inspiration. We went there last year and discovered an amazing raw mango flavoured boneless hilsa and a hilsa in a coconut milk and cucumber curry. Dishes very different from the hilsa fry, steamed hilsa (bhapa eelish) and eelish in mustard curry which we make at home.

The Oh Calcutta section at Tardeo's Rosewood Hotel is being renovated. So we didn't get to sit in the tastefully decorated restaurant. We were bundled into a seedy marriage hall in the hotel premises instead... the glaring white lights which were as antiseptic and still as it could get were quite a turn off. They did have lame drawings of eelish (which liked like rohu) pasted on the walls. A far cry from the aristocratic 19th century Bengali house look of the regular restaurant. Thankfully the familiar faces of the staff and the warm smiles of welcome were still there to make one feel at home.

I went there seeking inspiration and inspired I was. We started with a posto eelish, a heavenly treat which won us over in the first bite. This was a very unusual pairing of the East Bengal (Bengalis originally from Bangladesh) favourite of Eelish and the West Bengal favoured condiment of crushed posto (poppy seeds or khus khus in Hindi). Years back Tagore celebrated Rakhi with a cry of Joy Bangla (long live Bengal) when Lord Curzon partitioned Bengal in the early nineteen hundreds. Oh Calcutta's posto eelish was the next big milestone in uniting the two strains of Bengalis. All brought together with a pinch of turmeric, fried chillies and the favoured Punjabi (!) binder of fresh curd.

Mixed identities? National integration would be more like it. You will see more of the gravy than the fish in the photo below. I chided Kainaz for that (she took it). But I later realised that it was natural given the standout quality of the gravy which was creamy, slightly tangy and had the intoxicating bite of poppy. 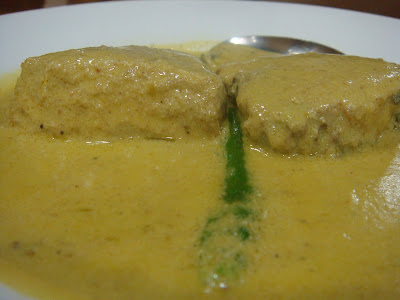 The fish (one peti piece - few bones, one gaada piece lot of bones) was quite fresh.

I am planning to make a version of this at home tonight. The menu card described it as Hilsa marinated overnight in fresh curd, posto paste and then slow cooked. Watch this space more.

We followed this by a tetulpata (tamarind leaf) eelish. I felt sorry for the poor thing. I don't think that anything could have held up to the standards set by the posto eelish that night. The tetulpata eelish had a slightly tangy touch from tamarind which is unusual to hilsa but didn't seem out of place. The gravy was a light, watery one. Delicate curries are typical of hilsa and one doesn't use heavy spices, garam masala or onions with Hilsa. The only time I came across onions in hilsa was at Bangladesh, the home of Hilsa. Must be a Muslim take on the Hilsa.

The tetul pata Eelish was a bit like a Paul Mc Cartney solo after the Posto Eelish's Beetles. And it didn't help that one of the two pieces of fish, the usually succulent peti piece was a bit stale and chewy. This, unlike the posto eelish, wasn't worth the Rs 350 (7 USD). 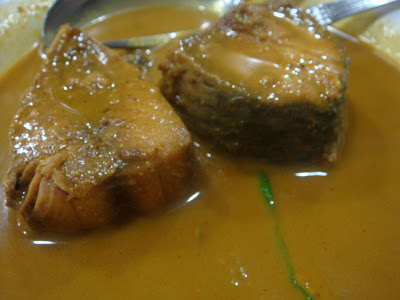 We had another rare mishap at Oh Calcutta that night. Hilsa, like most other fish, is had with steamed rice by Bengalis.

We always have this awkward moment when we go with Kainaz. She doesn't have rice. So we have to order luchis (soft Bengali puris) for her to have with the fish. This combination is like having a penne pesto with chicken tikka masala.

The waiter normally looks at us, raises an eyebrow, as if to say "are you sure" when I say luchi with eelish. I throw up my hands as if to say "I know!!!!".

The luchis took a very long time and I was teasing K about how the cook must be refusing to send it with fish and that the steward must be making it. Turned out I was true. The luchis were tough and yellow and looked refried when they came. Very different from the gossamer thin works of art that Oh Calcutta normally delights us with. This had never happened before. K left her plate unfinished. To think that we normally order seconds... AND thirds.

We declined desserts at the end as the house was full of pastries. Yet they very sweetly got two sandeshs (Bengali sweets) for us on the house.

While paying I noticed that they add a service charge. I never realised this before. Though as Kainaz said I doubt that I will ever tip them less because of this as the service is so warm and genuine. I rarely feel as welcome and valued as I do when I come to Oh Calcutta.

And that partially helped get over what Kainaz calls the 'servant's quarter' they made us sit in.

The festival is on till early September. Most hilsa dishes cost around Rs 350

Me! In words said…
We have an Oh Calcutta here that is running a Hilsa festival too... Thanks to you I now know what to try out there... Oh! and the recipe in your next post is something I will definitely try when I go home to Mangalore next week. Fresher fish...
28 August 2009 at 15:18