But have you ever thought of what happens after that? Once the princess and prince charming move in together? When stubbles, smeared make up, puffed eyes, tousled hair, unbrushed teeth come into the picture?

Salt Water Cafe has become one of our favourite continental restaurants at Mumbai.

We decided to go there for breakfast on K's birthday. Their breakfast had closed by the time we reached. Can't blame them for that. They serve breakfast till 12.30. We reached at 1250, But hey you can't wake a girl up on her birthday. For the record, I woke up earlier had a coffee and cookie and waited for K to wake up.

Anyway this wasn't a big problem. With breakfast over, eggs and muesli went off the menu. Neither of us wanted these in any case. K wanted waffles which went off too. But she ordered a roast duck salad instead.


The first thing I noticed was that the service was a bit slack in the morning. I was struck by the confidence with which they took our order the first time we went to Salt Water Cafe. The young boy who took our order in the morning was enthusiastic, new the basics but didn't inspire us. His answers to our questions left us usatisfied and loooking for help.

"What's there in the roast duck salad?"
"Duck sir"
"What else !?"
"Lettuce"
Sigh of exasperation "What dressing?"
"Asian sir".

Well you can't fault him on the facts. The salad was indeed awesome. The meat was tender and the seasoning was light and smacked of a light Far Eastern stir fry flavour. It's just that we struck lucky and he didn't excite the way the stewards here did in our earlier visits. 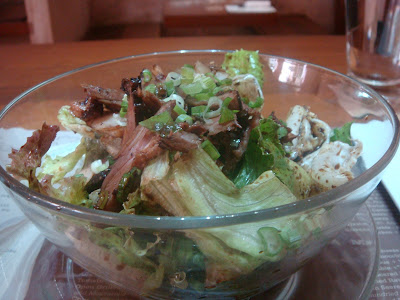 We asked him to get the cappuccinos with the food. He got it before the food came! But the cappuccino was pretty good. It was hot, steaming and gave a caffeine kick which is missing in most coffee shops.

The lazy service continued. We got a table inside and I requested them to get us a table by the large windows if a table got free. A window booth did get free half an hour later. I asked to be moved. But they'd offered it to someone who just came in. Frankly I wasn't feeling pampered for the price we were paying. Worse still, it was very different from our earlier visits when I kept praising the food AND the service.

Then came the shocker. My croissant arrived. I took a bite and smiled blissfully. The ham was as delicate as a bride's gown and the Ementhal had a solid, earthy bite to it. Heaven?

I was about to take my next bite when I saw a very loooong strand of hair. Much longer than mine. I was perplexed. Removed it in shock.

And saw another longer strand of hair. I was flabbergasted and didn't react. My mouth fell open.

By then the crack team of waiters began to troop out and one noticed my croissant. He came to us immediately and said that he would change it. I still didn't utter a word as I couldn't believe what was happening.

The promised replacements soon arrived. I checked for suspicious toppings and then begun my feast. And a feast it was. A celebration of meat, cheese, bread and fries ... as primordial as it gets. They gave two croissants to a plate which was too much for me and I packed one. We later had it while watching a movie in the evening. It stayed very well. 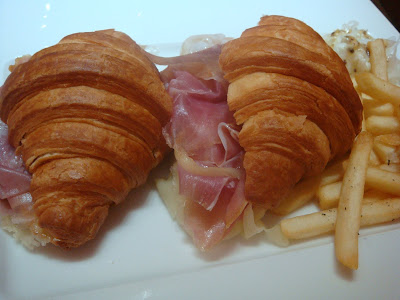 As we finally begun on our breakfast, Vinod came from the front desk and profusely apologised to us. He said that this had never happened there before. That this was their first hair mishap. Having come here earlier, I tended to believe him. Vinod insisted that we have a dessert on the house. When we declined then he requested to take one home at least. So I finally agreed and asked them to pack us a baked Philly cheesecake. Had that for tea the next evening.

So why am I not spewing venom? Why am I writing objectively rather than cutting them to pieces. Well I feel that people do make mistakes. And what mattered was that they themselves spotted the mistake and made amends and expressed remorse too. I guess that's OK. One can live with it.

The service was quite sleepy initially. That's sore given their prices (around 300 Rs/ 6 USD for the croissants). And they made a big blooper. But they did make up.

Yes, I will definitely go to Salt Water Cafe again. But only when we are all wide awake.
Bandra Bites Breakfasts Woes

Sharmila said…
Kosha mangsho gayeb? :-(
Well ... regarding your question on ilish roe, bora is the only thing I know of. And a tauk/ambol is also made with it and either tamarind or gota amchur .. mustard seeds and curry patta phoron diye.

Also you can chop up onions and green chillies and fry them with the roe in plain mustard oil ... like a jhuri jhuri posto bhaja ( i have posted that recipe with posto).
Am still thinking if something else is possible. :-)
25 August 2009 at 12:31

Magical Homes said…
surprisingly i still haven't eaten here inspite of it being close to home and more importantly in spite of being a foodie.

I was searching for your email address to email you about a potential new project that you may be interested in as a blogger in Mumbai.

Please email me your address at anjali@madebymany.co.uk