"One Raspberry please" - a one act play, Britannia

on August 10, 2009
This is my fourth post on Britannia, the Irani restaurant at Ballard Estate, Mumbai

I love this mad little place. As do my friends. Some of who make it a point to go there when they return to Mumbai. My wife loves it. Her friends do too. As does just about anyone who enters this mad little overpriced, non air conditioned, with walls with peeling paint, open only in the afternoons, shut on Sundays place.

I was there yesterday with a friend, N, who has just shifted out of Mumbai and misses Britannia.

This is what followed:

BK: Are you ready to place your order
Us: yes
N: One berry pulao please... (short pause) and a sali boti
BK: Very good combination, good order (writes the order down studiously)
N: And two Raspberries please (Note: Raspberry is a raspberry flavoured fizzy drink popular with Parsis and served in Parsi weddings)
BK: No Raspberry (with the same soft voice)
N: But I want Raspberry (She'd apparently been through this drill before)
BK: Have a fresh lime soda. Britannia's fresh lime soda is number one (does a thumbs up). Very good. Will go well with your food
N: But I want raspberry... I have come all the way specially for it
BK: No raspberry... (short pause, then whispers conspiratorially)... If I give you raspberry, it will get over... then some Parsis will come and ask for it and I won't be able to serve it
The Knife: But I am married to a Parsi ... that makes me half Parsi?
BK: (still very genial) No half Parsi, no quarter Parsi, no conversion, no raspberry
N: But I am staying with a Parsi friend ... I love raspberry
This called for desperate measures. I fished out a print out of my last post on Britannia
The Knife: I am a big fan of your restaurant. This is an article I wrote about it when I came here last time. My wife and I heard that you were closing and we had rushed here. We were so happy to hear that you weren't closing down
BK: Aah I remember... can I keep?
The Knife: Of course. This is for you. In fact my wife could not come today and asked me to pack cutlets for her
BK: That won't do... you must ask her to come here

BK still looked unconvinced. No sign of the blessed Raspberry. That's when I suddenly had a flash of inspiration

The Knife: I even made sali per eendu (a Parsi breakfast dish) myself for breakfast today (this was true)
BK: (breaks into a BIG smile and nods) Sali Per Eendu... (looks at N) hmmm he is Parsi
N: (taking advantage of the situation) Can we pleaaaase have a Raspberry
BK: (turns towards one of the waiters) Manish, two raspberries
BK: (looks at me) ... you are a very good boy
BK: (looks at N) and you are a veryyyy good girl

N tried her luck and got one more raspberry from BK, a photo with him, and a story about how BK asked two American guests a couple of years back to ask Mr Bush to stop fighting... but as he said, Mr Bush didn't stop till they finally threw a shoe at him. 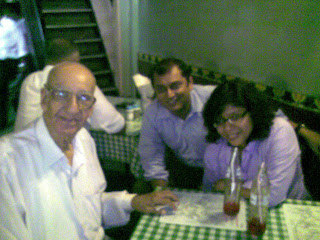 Note: I have a strong feeling that you can't pack Mr Kohinoor and take him home
Mumbai highs Parsi food - the better half People South Mumbai

Kalyan Karmakar said…
couldn't put it better S. He said some other stuff too which was really funny. But then I'd probably have to call Britannia Americana a la Sapphire for Topaz by Suketu Mehta
11 August 2009 at 17:10

Kalyan Karmakar said…
@M D... you must, don't give up without a fight...I am sure he is a softie at heart.

Me! In words said…
Wow!! gentlemen like that are quite a treat... some great conversation with good food. raspberry.. sounds yumm.. you don't get that at any of the Parsee joints in Bangalore...
11 August 2009 at 18:40

Kalyan Karmakar said…
Hey Ruthiez, thanks for dropping in. I love chatting with men and womenof food. They are the best sort.

Mr Kohinoor is obviously passionate about his restaurant.
Britannia is reason enough to plan a trip to Mumbai.
11 August 2009 at 18:47

Rahul Ghosh said…
Everytime I have finished ordering food at Brittania, Mr Kohinoor has proactively added glasses of fresh lime soda to the order. Now I know why! He was saving his precious supply of Raspberry.

BTW, if you are into esoteric Parsi soft drinks, you must absolutely must try Kayani's Bakery & Cafe near Metro. It's another Parsi institution with fab repertoire...
12 August 2009 at 11:57

Kalyan Karmakar said…
So there secret is out. I guess Finely Chopped will soon become like Hush Hush in L A Cofidential

It was a Saptami evening and we were meeting at a friend's place with a bottle of Royal Stag. The venue was his terrace and the POA was to get a little high before we head out to Tengra (which, kind of sums what you did during Pujos in Cal).

A non-drinker friend was entrusted with the task of procuring soda. After all, we had just started working and was slowly graduating from drinking whiskey with water to having it with soda.

My friend's parents were conveniently not at home and we were definitely living it up. So we poured our first drinks, added a dash of soda, a few ice cubes and gently took in the neon-lit Calcutta sky as the strains of the barowari loudspeakers playing shanai reached our ears. All was well with life.

Except the whiskey tasted really funny. The alarm was first raised by a friend (a seasoned drinker) who promptly inspected the whiskey bottle suspecting pilferage. (He had a history of polishing off whiskey from his father's stock and refilling it water to avoid getting caught. According to him, his father starting believing that the government was responsible for diluting his tipple and stopped voting for the Left Front!)

Anyway, on close examination, he reached the conclusion that the whiskey was ok. Now it was the turn of the soda.

Kalyan Karmakar said…
Rahul couldn't stop laughing ever since I read the story. Your friend might have hit upon an award winning cocktails. Something tells me he would not have survived to tell the tale
12 August 2009 at 13:43