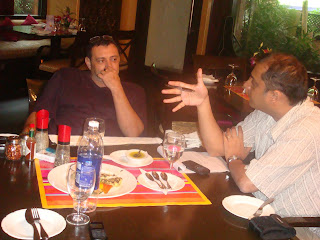 The last time I spoke to someone continuously for four hours, we got married. This time was slightly different.
I'd gone to interview Massimiliano Orlati for my friend Kirti of Feastguru. Orlati, or Chef Max as his known, began cooking in Northern Italy in 1975. Life took him to Southern Italy, Tunisia, Jamaica and Mauritius before he settled down in India seven years back. In India he has worked with Taj, Olive and now has taken over, Penne, a popular continental joint at Juhu in the suburbs of Mumbai.
I met him a couple of Saturdays back on a wet afternoon.
He started off by asking me about which 'newspaper' I belonged to. Feastguru and Finely Chopped didn't cut much ice with him as he muttered 'never heard of it'.
Finally Merryl, who organised the interview, arrived and established my bona fides.
And then we embarked on a journey of food. He told me about growing up in a farm where dinner was grown at home. Something which spoilt frozen food for life for him. And don't get him started on frozen fish. He used to go fishing with his grandfather from the age of two. He told me that Mumbai has the most amazing treasure trove of fish and that he was impatiently waiting for the sailors to go into the sea so that he could revamp the menu at Penne. His speciality is fish, rubbed with rock salt and grilled. The only way to eat fish according to him is to not interfere with it.
Chef Max was full of food stories ... from the spice trail origins of grilled fish of Constantinople to the Russian soldiers who lead to the creation of penne vodka in Milan and the harsh climes of Northern Italy and its robust food which gave his ninety six year old grandma a very strong heart.
He spoke in the endearing Italian lilt of movies such as Malena, Cinema Paradiso, Life is Beautiful and Bicycle Thief. With animated gestures which were difficult for the camera to capture. 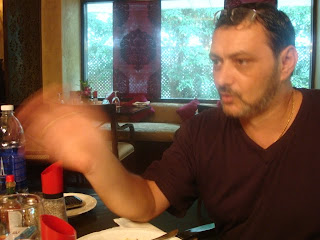 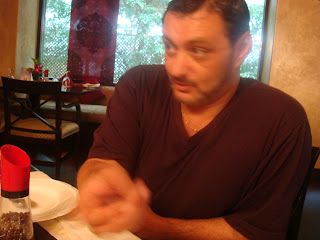 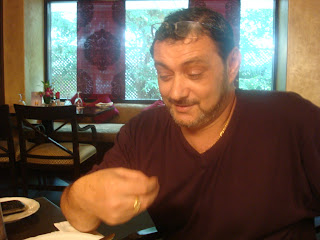 He told me about how his life changed after he went to London and learnt ice carving. He made a fortune by doing ice carvings for Arabian parties in the seventies. Funds which allowed him to travel the world.
Chef Max had his concept of local cuisine being a function of the natural resources around and the local weather. Which is why he plans to have a more Mediterranean theme in Penne. He feels that this yogurt, garlic, olive oil based cuisine of warmer climes will fit more naturally in India than the rich and heavy food of the wintry North.
I can't wait for him to start his thing so that we can go there and see what he has in store for us.
I asked him about the influences of Indian food on him. This pulao, clam masala and butter chicken loving chef said that he recently experimented with some pesto sauce, cold cuts and a dosa. After all 'dosa is like pizza', he said.
I cheekily told him that someone had beaten him to it.
We'd gone to Holiday Inn, Goa, for our honeymoon in 2001. They had a omelet counter and a dosa counter at breakfast. I requested them to make me a dosa with sausage, ham and cheese!
As Bhagat Singh said when he read the works of Lenin when he was jailed, this was like one revolutionary meeting another (source: Amar Chitra Katha).
I looked at the watch and realised that four hours had passed since we began yapping. And one of the most wonderful conversations that I have had in ages came to a close.
Thanks Kirti for arranging this.
Here's the link to the write up at Feastguru
Conti Food musings People

Creativecook said…
As always,interesting reading, I was perusing thru stuff. Interestingly enough I learnt to cook and eat more bengali food after I left Kolkatta. Did not like fish all that much, my (not-bengali) husband loves it. Go figure!
13 September 2009 at 10:10

Kalyan Karmakar said…
HI Sharmila... coincidentally I spent quite sometime with Feastguru's Chief Foodie, Kirti and his family, at Mohammed Ali Rd, feasting on Ramzan food till two in the morning, after writing the post

Hi Creativecook: thanks, even I began cooking after we rented a place at Mumbai. My dad's genes I guess. Am not too fond of fish myself as I grew up on the same rui curry day after day.

My wife, a Parsi, loves fish so I buy fish. Plus helps me connect with my growing up days. And we definitely make more varieties of fish preparations.