Living on a prayer... Ramzan feast at Mohamed Ali Road 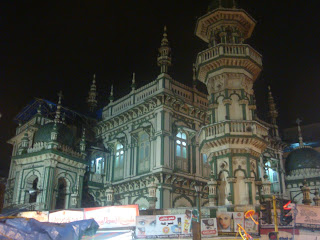 Avoid Mohamed Ali Road during Ramzan if chaos, crowds, sweat, heat, dust, noise and grime are not your cup of tea.

Human emotions, celebrations, culture, joy, liveliness, colours, food turn you on? Then Mohamed Ali Road is where you should head at night after the Ramzan fast is broken. Mohamed Ali Road is a part of old Mumbai below the J J Flyover. You will have to cab it over there as it is near impossible to park your own vehicle. 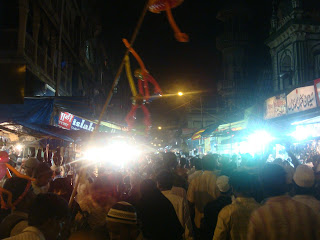 There is a lane there by a mosque straight out of the Arabian Nights where Mumbai gets together to celebrate the holy month of Ramzan. It is a Muslim festival but people across religions, Hindus, Sikhs, Christians, Parsis make a beeline in the evening to Md Ali Road. The road is transformed into a meat lover's fantasy. There are stalls selling chicken in every form, quails, offal, beef cooked in largely Indian, Mughlai fashion. A scene as Indian and Asian as it gets. it looks like a primitive bazar from the time of the Mughals.

The street is choc a block with people jostling with each other in search of food or even new shoes or clothes. The street is packed, reminiscent of the famous local trains of Mumbai. The lanes are at times claustrophobic and at times a source of festive delight. There is a strange order in the chaos as people move around with smiles on their faces despite being knocked around. I have been there quite a few times over the years and have never had my pocket picked!

I don't know about you but there is a child in me which likes celebrations and happy faces. I feel strangely energised and exfoliated in the madding crowds of festivals such as Durga Puja or of the Ramzan bazars. A world so removed from the air conditioned environs we live in. This is human spirit. Pure and primordial. And I love it. And the idealist in me loves the fact that people lose their religious identities in the crowd as they mix together in the medley of good cheer. 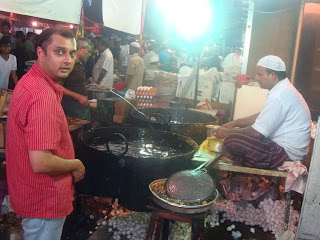 And of course I love food. The sheer array of food an display is like an unbelievable fantasy. The food is patchy. It could reach the sublime at times. And be very ordinary too. Keep in mind that this is street food and they are not bothered about repeat customers. The food is spicy, loaded with masala, oily, served on basic cutlery and demand cast iron stomachs.

But in case you are interested, Anthony Boudain once shot here and couldn't stop raving about the food. 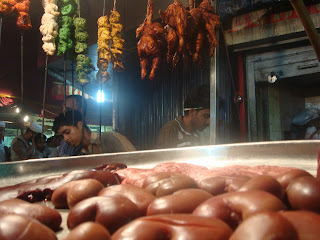 I went there last evening with Feastguru's Chief Foodie, Kirti, and his family and friends. 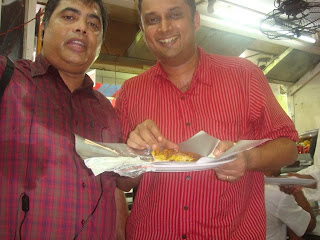 We stopped first at a shop which had chicken on its menu. We had a fried, spicy, under cooked, 'tandoori' chicken. Very different from this subtle roasted chicken dish. Some fried chicken bits (huna) with a roaring masala and some nice brain curry. Kirti and co went into a narrow lane in search of beef. I felt claustrophobic there and stayed put. They soon came back and joined me at a counter in the opposite corner which had some lovely, though over spiced liver and kidney (gurda, kaleji) masalas. And a local burger called naan sandwich which had a potato and beef patty smashed in local bread. In between we had mutton khichda which was a porridge made with a mix of pulses and cereals. I found this to be a nice taste breaker. Kirti, found it be a waste of time, and rushed off to search for more carne. 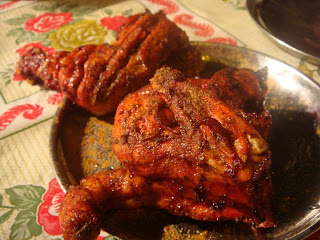 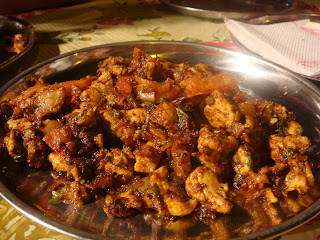 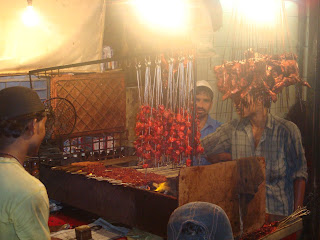 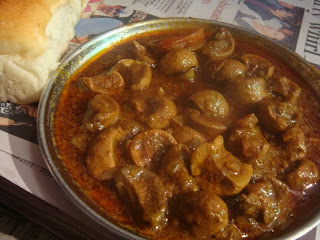 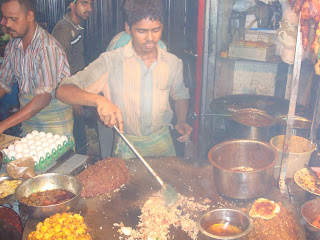 We ended the evening at Suleman Mithaiwala over some lovely, sweet, nutty, malpuas ... giant circles of egg fried in lots of oil and sweetened. 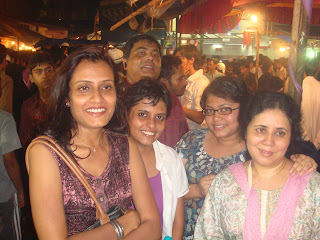 Unknown said…
Thanks for this very nostalgic post. Its one of my favorite places in Mumbai. Can never get enough of the food, despite getting sick multiple times. I want some Mal-Puwa now :)
15 September 2009 at 22:05

spice and more said…
Wow looks like an amazing experience. A little scary too...all those crowds and all that offal (sorry, but I am not great at that...its more the thought of it that puts me off). But the rest of the food and the experience sounds amazing...I will have to try it sometime if I am ever in India at the right time!
17 September 2009 at 07:28

Kirti said…
Almost a year ago, we experienced this. Amidst, the chaos, crowd, cacophony, dust and food of dubious quality, this is an experience that one should never miss.

Remember, the shooting of food from every angle or the search for the best food in the claustrophobic narrow alleys? Pure bliss, friend!
14 August 2010 at 13:22

Kalyan Karmakar said…
@Shahil, true its one of the gut wrenching experiences when one transcends beyond food

@Spice and More, yes you must, you can eat before and then go and snap pics. Will take you guys

@Kirtim, completely agree. This has to be a 'gang' experiences. That's what makes it what it is. Have wonderful memories of every time that I went in a group, peaking with the last time
16 August 2010 at 01:28