on September 05, 2009
Warning: long post ahead with uncensored tales of flesh 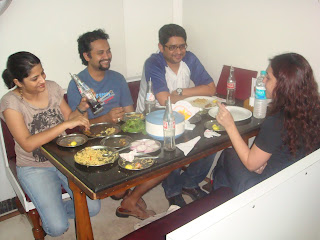 There is a programme called Lonely Planet Six Degrees which we often follow on Discovery Travel & Living.
The basic premise is that an anchor lands in a country. Meets someone who introduces her to someone else who introduces her to someone else and you discover the place with her in the process. I think Asha Gill hosts it.
We had something similar on Finely Chopped last night. Let me lay down the train of events first.

I was looking for cohorts to go to Mohammad Ali Road in old Bombay. Mohammad Ali Road has an alley which is packed with food stalls to break the Ramzan fast. It is a riot of colours and sweat ... a meat lover's fantasy with grilled chicken hanging from skewers, organ stews made with liver, kidney and goat trotters in big steel drums and quails fluttering in cages. There is a mood of festivity with bright lights, bright new clothes, teeming millions and a Mosque serenely looking at the revellers. You come to celebrate your faith. Or you come to celebrate food. And everyone feels happy about life.

Gives you the goose bumps? Mohamed Ali Road would be just up your street if you like new experiences, love to hit the street without qualms, and are aroused by the world of food. It is not for you if you approach life rationally.

The food is quite ordinary to start with after all as they don't have to bother about repeat visits. And you do get ground like good filter coffee thanks to the crowds.

Rahul suggested that we go to a restaurant closer to Byculla rather than hit Mohamed Ali Road given the pedestrian quality of the food and memory of a friend of his who got Hepatitis after eating the Mohammed Ali Road Stuff. 'Chicken heart' I thought but kept quiet as I hadn't met him before and his Facebook picture's a bit intimidating.

So the five of us landed opposite Nagpada Police Station close to Byculla. In front of a hole in the wall place, if there ever was one, called Sarvi. I climbed the stairs gingerly wondering what K would be thinking. The stairs opened on to an air conditioned section. Spartan, white washed, clean chairs ... and the heady aroma of beef. I knew we were home as the smell woke up memories from my college days of a humble Muslim kebab joint beside Jamuna Cinema in Calcutta. 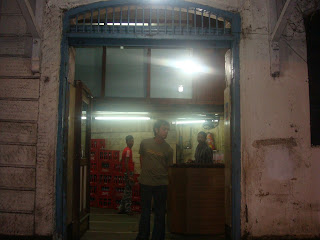 Rahul suggested that we order Sheek kebabs. I really began to doubt this man. Most sheekhs in Mumbai tend to be rubbery and chewy. Does this guy really know his food? I held my silence and saw Irin and Soumik looking quite confident.

The waiter heard 'sheekh' and charged down the stairs and asked a kid to take the rest of our order.

He soon surfaced up the creaking stairs with a casserole. He opened the lid and the wafts of the most heavenly fragrance came out and put me in a trance. As my eyes slowly began to focus again I saw lovely, limp kebabs lying in the casserole. Little plump Mamas. I took one onto my plate and had a bite. A million senses erupted in joy as I had my first bite of the beef sheekh kebabs. Tender and softer than a chubby baby's cheeks. Fragrant. More delicately flavoured than the most intricate of Persian carpets. You could taste a slight sweetness, a muted saltiness and the odd its bitsy bite of green chilly. I think this is what the poet had in mind when he said 'Paradise Regained'. It was as if the kebab was doing a serene and poetic belly dance in my mouth. Ephemeral. 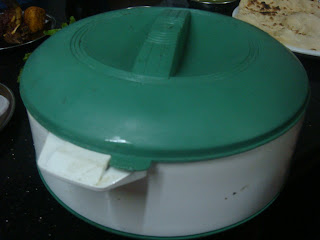 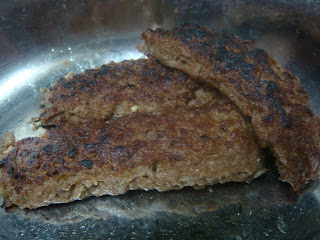 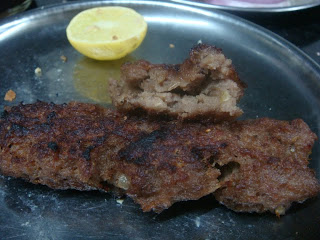 I didn't even think twice when Rahul suggested that we order more sheekh kebabs. This was a man i would trust with my kingdom. We ordered a total of six plates and I kept wolfing down these little work of arts with nice, soft tandoori roti.

We tried out tongue. They used the Hindi/ Urdu word for it zaban. I have never had fried tongue before. It was nice and scrunchy and came with a little, round potato which was fried on the outside. Surprisingly on the bone unlike Tongues served in Goan restaurants. 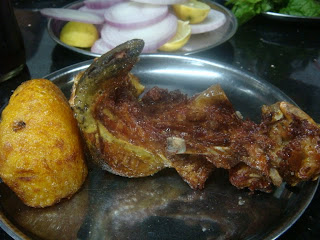 We saw some biryani in the next table. It looked to be the gravy, soggy variety which is anathema to a table of Bengalis (barring K). Talking of Kainaz, the other two tables had Parsi families. I guess that it was no surprise that this temple of non vegetarian food was full of Bengalis and Parsis.

We ordered a mutton pulao instead of the biriyani. This upset the waiter no end as he said that biriyani was ready while pulao has to be made. We were eventually able to convince him that 'making' dishes is what restaurants do and got him to get us some pulao.

The pulao was greasy, full of ajino moto, had thick rice and was avoidable. 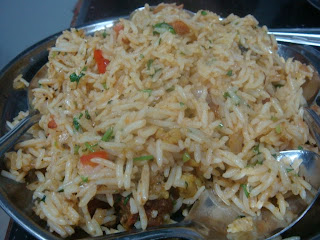 So at Sarvi, close your eyes and order the beef sheekh kebabs and naans. I have it from 'the man'. 6 plates of kebabs, a few soft drink, paratha, pulao and 1 tongue came to Rs 560 (10 USD). And all our tummies are in good condition.

We later went down to the non air conditioned section downstairs where they make the kebabs before they put it in the casserole and send it. I tried to photograph it for you but was chased away by the owner.

We headed to a sweet shop opposite which made the special Ramzan sweets. Rahul, Irin and I were the sweet fans and settled for a malpua and rabri. These malpuas are a cholesterol dump of million eggs, deep fried in a gallon of oil. You normally eat it at Suleman Mithaiwala at Md Ali Road after dinner. The malpuas at this nameless shop flattered to deceive as the malpua was salty and the rabri didn't help sweeten things. In fact we had a couple of pot rabris which came in tiny earthen pots. Those were sweet, milky and refreshing. 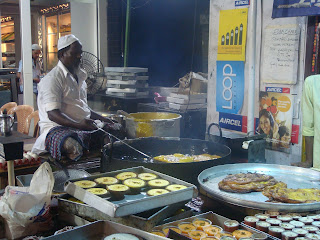 The perfect end to a Finely Chopped evening for two creatives and an account management person from advertising, a man of films and a market researcher connected by six degrees of food. 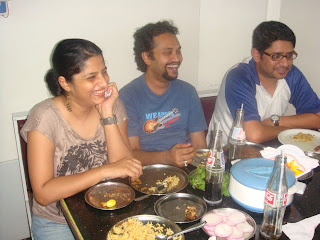 Anaggh A. Desai said…
Quite nice writeup. Visited the Bohri Mohalla & Minara side both. Tushar Gandhi is another hardcore foodie like you, & is leading a team today as I write here. Some of the other places who serve nice stuff is Santacruz willingdon gym; rajasthan on s.v.road & nice:)

Sharmila said…
Have always wanted to taste galli food during ramzan .. just never could gather enough courage to. That desc of the kebabs is too good. Thanks for finally removing that veggie from your header ... make a poll ... am sure your kosha mangsho will win hands down to be on the header. Chobi ta dekhei aro khabar er kotha porte icche kore. :-)
5 September 2009 at 23:02

Kalyan Karmakar said…
Thanks Anaggh. I've read about Bori Mohalla but never located it. perhaps we should plan a trip. Tushar gandhi? Really? You could've knocked me down with a feather

Sharmila...aare that was Goan pork chilly fry with alu and chillies. My site is entire non vegetarian. Your qualms about street food is underatndable. Years of conditioning. But rememeber Charulata peeking onto the streets with her binoc?
6 September 2009 at 02:35

Gaurav said…
i can only sit on the sidelines here and read...

Kalyan Karmakar said…
Gaurav...it's Ok to take a break occasionally, even sachin does :) And you have really pushed the boundaries as a vegetarian. Which is great.

Aroon said…
Sarvi's seekhs are heavenly and when it comes to food, rahuls suggestions are always spot on..
7 September 2009 at 15:00

Sharmila said…
Hahaha ... is it so Kalyan?! Looked like lauki stuff and I hated the sight ...truthfully. Visiting your place was getting real difficult just because of it. :-)
Hmmm .. Charulata and her binoc do sound inspiring enough. :-)
9 September 2009 at 11:41

Anand said…
Visited Sarvi based on your recommendations yesterday. The kebabs were excellent. What's with the service, though? They all act as though customers are the bane of their existence!
10 September 2009 at 12:38

Kalyan Karmakar said…
Sharmila ... lauki, lau on my blog. Not even if i am finely chopped. here's where the picture was from http://finelychopped-k.blogspot.com/2009/03/raindrops-and-roses-and-hot-goan.html