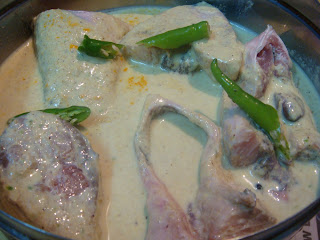 I was dead beat when I returned from work yesterday.
I took a Cetzine in the morning because of a sneezing bout. Was in a daze through the rest of the day. My driver was AWOL and I had to drive and got a back ache too. Went sweater shopping in between for next week's Switzerland trip. Ironically, felt like a broiled lobster, as I was in a dingy cab in a hot and dusty afternoon. A far cry from Jungfrau. Almost dozed off while driving back.
Felt pretty much like mustard seeds in an oil press when I returned home.
Then I made a marinade for posto ilish before I took a shower.
I felt my troubles ease away and the smile return to my face as I put the crushed posto (poppy), mustard, chilly, turmeric, salt in the curd and gave the mix a nice whip in the blender. It was almost as if I got a nice, relaxing massage along with all the masala.
Nothing like the world of food to unwind in.
Food musings

Unknown said…
Point nicely put across Kalyan.... When one is tried, he/she should do things that they really like.... for me, relaxation after tiring day is to go on long Bike ride alone/with friends, hot/rainy/cold weather - doesnt matter.... it is just a pure joy of a Bike ride on the highway
10 September 2009 at 16:50

Kalyan Karmakar said…
Scarlett, I'd settle for a good chinese takeaway too. Just a bit sceptical after 5 Spice and Asiawok sent me chicken hakka without chicken

Guru... I used to enjoy gymming earlier. Nowadays a good cup of coffee or a walk down carter's listensing to rock works well

Home Cooked Oriya Food said…
I would unwind with a book... A lovely passion to unwind with cooking - double pleasure....
Lovely fish... I have been making it here - but nothing like fresh fish back home...
10 September 2009 at 17:18

Miri said…
Sigh - cooking does do wonders doesn't it to a tired soul? (ok, this is only for people who *like* to cook!) .

BTW, I switched from Cetzine to Allegra and it made a world of difference - bye bye drowsiness! Of course moving to Delhi completely stopped the allergy attacks - but thats another story...
11 September 2009 at 12:32

Miri said…
Sigh - cooking does do wonders doesn't it to a tired soul? (ok, this is only for people who *like* to cook!) .

BTW, I switched from Cetzine to Allegra and it made a world of difference - bye bye drowsiness! Of course moving to Delhi completely stopped the allergy attacks - but thats another story...
11 September 2009 at 12:35