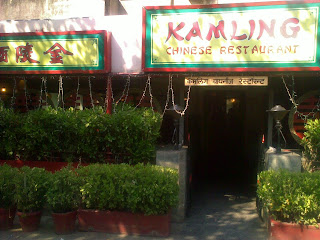 Kamling belongs to an era when Chinese food in India stood for Cantonese food cooked by Chinese settlers here. And Chinese was the only international cuisine which found some favour amongst the more intrepid of Indian restaurant patrons.
This was before Nelson Wang fried chicken in gram flour batter with coriander leaves and invented what he called a 'barbarian' dish called Manchurian Chicken. Before Indian Chinese that is. (Source: Vir Sanghvi's 'Rude Food').
We went to Kamling after years yesterday. Kamling is on the road which connects Churchgate to Marine drive and includes Pizzeria, Not just Jazz by the Bay, Shiva Sagar, Mocha and the Ambassador Hotel as its neighbours.

You enter the restaurant and are greeted by the decor typical of Chinese owned restaurants across the world - dim lights, lamps, red walls, dragons, heavy wooden furniture, Chinese proprietors - straight out of the Bruce Lee Hong Kong Kung Fu films of the seventies. The Hollywood technicolour interpretation of Chinatown and the world behind the bamboo curtain then. 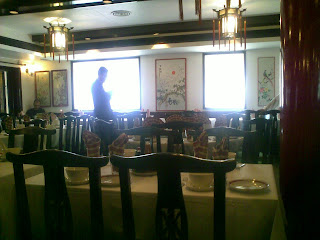 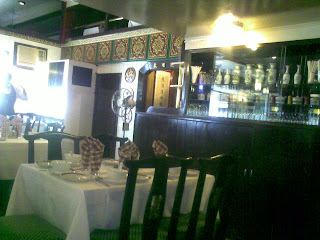 The decor smacked more of the Chinese restaurants of Calcutta, a city with its own Chinatown, than the Sindhi and South Indian Chinese places of Mumbai.
The food was quite different too. Reminiscent of 'Calcutta Chinese' rather than the Indian Chinese of Mumbai best exemplified by 5 Spice.

The food was ethereal and had me oohing and aahing in nostalgic ecstasy.

Salt and pepper prawns - medium sized prawns fried in a yellowish batter, mildly flavoured. That's it no onion, chopped garlic, nothing. Reminiscent of the 'prawn balls' of the Chinese restaurants of yore. Different, in a quirky way, from standard prawn preparations in most 'Chinese' places here. 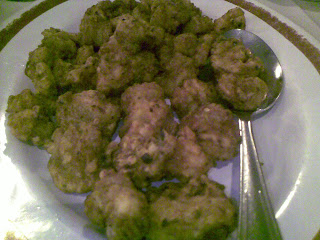 A heavenly roast pork with onions - exquisite thin slices of pork, tender as one's first love, with little wisps of pork fat flapping like a baby elephant's ears ... skipping happily in your mouth with each bite. It rested in a very faint, sweetish sauce which bonded, rather than overpowered, the meat. Little bites of fried onion to satisfy vegetarian guilt pangs. The Last Emperor would have approved. 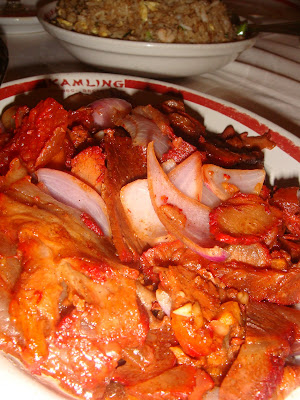 The hakka noodles were nice and firm with a point of view unlike the limp and cold hakka noodles served in most local restaurants.
The mixed fried rice was just like the rice I had in two Chinese run places in Switzerland and at Sadri's at Langkawi. It was well flavoured, looked brownish thanks to soy sauce. Different from the pale white insipid fried rice in most Indian 'Chinese' restaurants which are engineered to call for a side dish. And it had peas (!) and some lovely chopped sweet pork bits. The verdict? Two of us ex Calcuttans loved the food. The third, a pure bred Bombayite, maintained a polite silence.
Kamling would thrill those who loved the Chinese cuisine of the eighties, the thirty plus generation which has grown up on shades of authentic Chinese food. A bit of an anchronism for youngsters who have grown up on Indian masala Chinese though.
The prices were slightly higher than the local favourite, 5 Spice, main course at Rs 265 - 300 (5 - 6 USD) and noodles/ rice Rs 150 - 190 (3-4 USD). Quantities a lot less.
PS: Read Vir Sanghvi's book Rude Food for more on the evolution of Indian Chinese
Mumbai highs Oriental South Mumbai

Scarlett said…
You said it right! "Kamling would thrill those who loved the Chinese cuisine of the eighties, the thirty plus generation which has grown up on shades of authentic Chinese food. A bit of an anchronism for youngsters who have grown up on Indian masala Chinese though."

I would fall into the "non-polite non-silent" group, given that I don't hesitate in expressing my displeasure if I don't like the food at a restaurant, unless I'm paying little - in which case I don't expect mindblowing food anyway! And Kamling isn't one of the places I paid little at, so I came out grumbling & complaining the only time I went there! LOL.

There! You have it! My opinion of Kamling :)

The Cloudcutter said…
I love Kamlings! But, it's the same old story with me - haven't been there in years. I remember birthday lunches, Sunday treats and a nice hot meal late at night, after attending my first rock show!

Sad about the portions though - I remember they used to be huge, really HUGE. Once, four of us shared one rice and the waiter sweetly took back the other two portions that he had warned us not to order to begin with! I remember always leaving that place with doggy bags :-)

The knife said…
Ha ha Scarlett...I was waiting for your defnese of 5 Spice. It's ironic that you are in the land of Tangra while I am a neighbour of 5 Spice. By the way curious to know why you didn't like Kamling. And the burnt chilly rice of 5 Spice? Ooh la la

Creative Cook, Pinku ... I am big nostalgia myself. A good way to explain the 100 g pack of Mukhorochak dalmut that I polished in the evening.

CC: "Portions" were relative to the horse buckets at 5 spice where three young bachelors would be hard pressed to finish one rice. here two young ladies with good appetites and me could not finish one rice and one noodle between us. But what was left would leave a very hungry doggy.

No new of Ming's right from the beginning but used to pass it and go to Gokul or Badde Miya when the night was young
30 October 2009 at 02:41

The Cloudcutter said…
Try out Ming's sometime. It's an old favourite and I did go there recently as well.
30 October 2009 at 09:58

Scarlett said…
I don't remember why exactly I didn't like Kamling food (went there 3-4 years ago)...but I distinctly remember not liking the food.
31 October 2009 at 13:09

viagra online said…
wow looks awesome, excellent place for a romantic dinner haha seems to be very fine and expensive but I guess I can made it haha
Thanks for sharing, excellent post.
11 January 2011 at 23:15