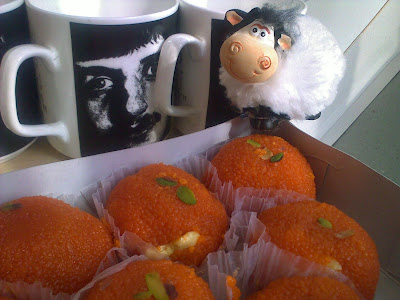 Diwali's the biggest festival in India. Even President Obama celebrated it. I guess that says it all.
Back in Kolakata we celebrate Kali Pujo at the same time. Bursting firecrackers is common to both Kali Pujo and Diwali. The main food association with Kali Pujo was mutton curry as traditionally there used to be a goat sacrifice or 'patha boli' during the puja. That is largely a thing of the past though I won't be surprised if it still happens at the legendary Kalighat Temple of Kolkata (never been there myself). Can't say that I miss Kali Puja as much as I miss Durga Puja.
My main association with Diwali in Mumbai is the longish holiday and the box of mithai one normally gets at work. This time we just have a three day weekend versus the four to five day break one has got used to.
But it was niceto get a box of sweets from office as well as a Diwali lunch for all. Especially after the big bad recession last year and the austerity drive in Corporate India.
Green shoots?
Well at least my new cubicle mate (about to topple into the box of sweets in the picture) plans to polish of the laddoos (sweets) while we think about such weighty matters.
And you enjoy a nice, sweet Diwali.
festival food From the hip

Kalyan Karmakar said…
Thanks Sharmila. Wish you and all at home a great Diwali and Kali Pujo
16 October 2009 at 18:50

Sudeshna said…
The first photo looks like ferrero rocherin a jar, am I right? Then you are a lucky fellow to even have a glimpse at those chocolaty beauties so many together.

Kalyan Karmakar said…
Thank you Sudeshna and wish a great Diwali too. I believe its quite big down South.

The picture in the header was a jar of truffles in the Sprungli chocolaterie. Sprungli of Lindt and Sprungli fame.

Sudeshna said…
Ah,
I didn't get to have this version of Lindt but i have had those small and big bars of Lindt chocolates. I love the milk can they sale those small bars in
20 October 2009 at 10:49

Kalyan Karmakar said…
I was introduced to Lindt years back by K when we began dating. i used to regularly head to pick one up at the Oberoi chemist when I needed to make up. Lot of memories
20 October 2009 at 11:34