Blogging live at Switzerland was an awesome experience. Fresh baked posts, straight from the oven. I wondered whether I would feel like coming back and writing more posts. Whether I should let the earlier posts lie unedited, with typos, bereft of pictures? That's when K suggested that I get back and write photo posts. So here you are. My attempt at graphic novels, comic strips, photo posts, lazy writing 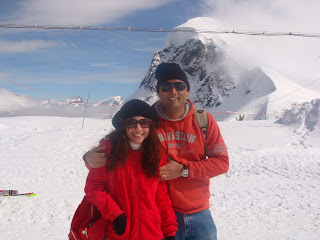 K and I 'touched snow' at Matterhorn at Zermatt. The mountain that features on Toblerone packs. I am sure you didn't expect a Bong and a Bawi to climb up. Three cable cars and we were up on the galcier. 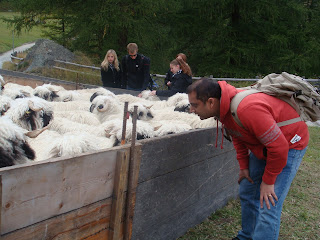 We decided to 'hike' down the last part instead of taking the third cable car. Hiking meant walking down a well manicured path. Switzerland is a country which makes life easy for people.
We were walking down fairy land when we suddenly came upon a village fair. I think it was a sheep 'mela'. 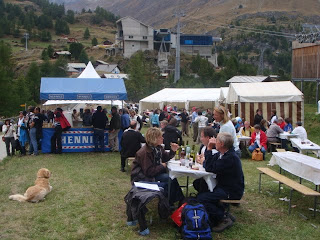 And there were food stalls where locals seemed to be having a ball. Playful children, busy mothers, boisterous men, laughter, cakes and ale... an idyllic world. This is what Dilber meant when she said you can't plan a Swiss holiday. 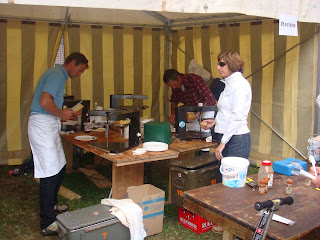 With food stalls around, could the Knife be far behind? I went to one and discovered Raclette. You have had fondue fantasies? Well the Swiss never told us about raclette!!!! A slice of cheese, heated poured onto a plate, smeared with paprika, served with boiled potatoes, gherkins and pickled French onions. There is not greater joy know to man than eating a plate of Raclette as it begins to solidify. We couldn't have enough of it and tried it again at Bebbies at Interlaken. 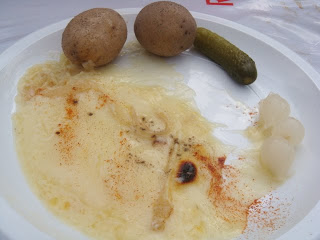 I got a few slices of Raclette home Chas Barmetteler at Lucerne. You could get it at departmental stores at Switzerland too.

I plan to pop it in the micro and have it. Don't tell the Swiss that. They have little pans to melt raclette and would be shocked at my barbaric plans.

This is the post I wrote while at Zermat http://farawaydiaries.blogspot.com/2009/09/swiss-serendipity.html

NikVad said…
Hi,
We found this post in your blog very interesting. Could you join us @hobbiesnyou.com and post this article and a few other recipes you posted in your blog in exchange for some publicity? Yes, we @ hobbiesnyou.com are starting a free newsletter and we would be glad to have this article in it. Please log on to hobbiesnyou.com, register and post your articles (As many as you can...). We will make sure to send you a copy of the newsletter and keep you updated where ever we take your article and publicize your blog, in advance ofcourse. So, why wait? You can find more details @ hobbiesnyou.com
6 October 2009 at 23:04

Home Cooked Oriya Food said…
Hodden food treasures and you are made for each other... Wow the way you describe your food...
7 October 2009 at 06:11

Kalyan Karmakar said…
Hi NikVad, thanks for writing to me and inviting me to contribute. I'll definitely look at it

Hi Somoo (HCOF), was greatting your comments while I was travelling :) I have been accused of making people feel happy

Hey Sharmila, anyone serves them right for being so secretive. It felt writing posts without pics while travelling. Time zones, strange key boards, impinging on holiday time, high costs (at times) made me skip them. Will make up now. I love taking pics. probably quite excessive. Luckily we got folks to click pics of the two of us together too
7 October 2009 at 16:08

Anonymous said…
Ahh... The Secret World of Raclette Dining! Well, I am very glad you saw the light, my friend. Have you read the book by Raclette Australia? It is right up your alley! And it tells you WHY the Swiss have kept raclette a secret...

Who need crime novels if you can have a mystery recipe book?

PS: Sold out on Amazon, no wonder, I got mine directly from Raclette Australia, the most knowledgeable source on raclette I have found.
PPS: Don't! Don't microwave raclette cheese! Please!!!
7 October 2009 at 16:15

Kalyan Karmakar said…
Hey anon, thanks for writing in. Is raclette big down under too? The book sounds very interesting. I have a friend who's just moved to Australia. Let me see if I can tap him.

Re PPS: they did try to sell a raclette pan to me but Rupees didn't stretch much in Francs. But the girl in the shop was shcoked when I wanted to try it. Said that uncooked raclette tastes bad. She wasn't being stingy because I'd tasted a few others and bought them too by then
7 October 2009 at 16:55

spice and more said…
Hey welcome back! Sounds and looks like you had a great trip.
Our swiss friends invite us over for raclette and it is rather yummy. I think you could grill the raclette and replicate the cooking in a raclette thingy - afterall it just has electric coils underneath a stone top and you slide the little trays with the cheese underneath - basically grilling - right? Don't go the microwave...it would be a tragic waste of the lovely raclette cheese! We usually grill our cheese with the paprika, chillies, some dried herbs, etc at the same time so those flavours really meld in with the cheese, and then pour it over the potato, corn, gerkins, etc.
PS not sure that I would say it was big here in Australia...if not for this swiss family we are friends with I would never have heard of it.
12 October 2009 at 11:04

Kalyan Karmakar said…
Hey Spice n More, great to hear from you. yes, it was the trip of a lifetime. I always say that once I am back from a trip. but that's cool I guess.

You are tight about racelettes. they were grilling it in an oven at the fair. We don't have an oven at home but our micro has a grill function. Let's see if that works
12 October 2009 at 13:49