Raksha Bandhan is an old Hindu tradition where a sister ties a Rakhi around her brother's wrist as the brother pledges to protect her. It's most majestic rendition was when Rajput princesses would tie Rakhis around their brothers' arms as they (the brothers) left to fight the Mughals.

Centuries later Rabindranath Tagore revived this cusotm when the British proposed partitioning Bengal for the first time around 1911.

The Bengali version of a brother sister festival is 'bhai fota'. This happens a couple of days after Kali Puja or Diwali. This is celebrated in other parts of India such as Maharashtra as Bhai Dooj.

In Bhai Fota the sister prays for the well being of her brother. From what I remember the basic specs are as follows:.

Bother and sister sit facing each other on the floor. The sister dips her finger in sandal wood paste and applies a dot/ teeka/ fota on the brother's forehead. This happens thrice with curd and ash from a diya (or kajal/ eye liner???) substituting the sandal wood paste.

While doing this she recites a little ditty which goes something like this In Bengali:

This loosely translates as 'Yamraj, the God of death, is stopped in his tracks as Jamuna gives her brother a fota (teeka) and I give my brother a fota.' This is based on a mythological story which I once knew.

Sweets are exchanged. If the sister is older she blesses the brother who touches her feet and gives him a gift. This is reversed if the brother was older.

Yesterday was bhai fota and I was remembering Pupai, our next door neighbour from Kolkata. We had all moved into our apartments in Kolkata in the mid eighties. We were two brothers at home. And Pupai was an only child with no immediate brother. I was eleven. My brother was three. it's not polite to refer to a young lady's age but I think Pupai was five or six years old.

So our bhai fota ritual started. We hardly missed a year in between. I was elder than Pupai and my brother was younger than her. So we all got gifts. 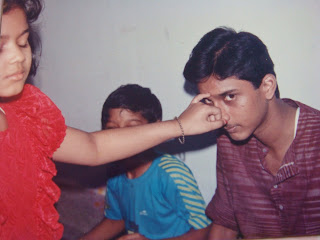 Her mom would organise the sweets and cook ghoogni, a Bengali chick pea dish, which we really looked forward to. (Turn to another Bong Mom's lovely blog for a recipe of traditional ghoogni).

My Mom would get pastries from Jalajog, the Bengali savoury shop from the Stone Ages, and make 'chow mein'. Very few Bong Mom's would make Chinese at home those days and this was quite a novelty too.

I left Kolkata fourteen years later. Pupai, grew up went to college, went to Delhi and then to Texas. Through her journeys she would find out my email id's and wish me on Bhai Fota.

I hadn't heard from Pupai for a couple of years and I was thinking of writing this post on Sunday. I opened facebook on my phone and suddenly saw a Facebook friend request from a vaguely familiar name. Turned out that it was from Pupai using her grown up name!!! ('Pupai' was her nickname.) She had tracked me out and sent me Bhai Fota wishes all the way from Texas. She's doing her PHD. And I am sure the world is her oyster now.

That message from miles away made my day. I told Pupai to buy a Bhai Fota gift for herself on my behalf.

I guess this post will have to do till we next meet.

Caveat: The customs and historical references in this post are based entirely on my memories from a long time back. There could be mistakes and gaps in them and should not be taken as definitive. Any corrections, as comments, would really be appreciated.

Gia Fernandes said…
LOL @ "it's not polite to refer to a young lady's age but I think Pupai was five or six years old."

It's really sweet that she remembers you after all these years and got in touch.

Kalyan Karmakar said…
In fact Pupai has bravely come out in the open in F B and mentioned that she is a year short of thirty. So my estimates were right :)

Yes, its really sweet that she does. And i was particularly touched when I first got her mail after I moved out of home.

we were two sisters so all our bhai fotas and rakhis were celebrated with 'patano' brothers. Can relate to every bit of this.

by the way the ditty you mentioned goes like this...

Kalyan Karmakar said…
Hey Pinku, thanks so much for this. i guess I got the last 3 lines right and I was in two minds about the order :) But then i never recited it myself

I remember feeling very upset during my first Rakhi in India when I was about 7 and had no sisters around. Finally my Mom had to tie me one after I threw a fuss
20 October 2009 at 11:54

Bong Mom said…
Aww that was sweet. I had no brothers either. But bhai phota still meant food 'coz my Mamas would come home to get phota from Ma.

Yesterday my daughters gave phota to neighborhood cousin brothers :) Much food was had and yes everyone got gifts :)
20 October 2009 at 21:07

PNA said…
that was so well expressed Mr. Knife!

I too owe my long lost friends/class-batch-school-mates of childhood to Orkut (first) and FB now (migration, u see)

Kalyan Karmakar said…
Sandeepa (B M), that sounded lovely. Fetsivals can be quite joyous. And what Pinku referred to as 'Patano' relations are often cherished as they are by choice.

PNA: yes I have got in touch with a number of old friends and memories through F B and Orkut. And made new friends too
21 October 2009 at 14:03

Unknown said…
Wow...that really brought back memories...In fact I was also surprised to get a Bhai Fota wish in my FB Inbox just the day after you asked me whether I had any of the old pics....Sorry, could not send you the pics due to their size....Will soon figure out a way to send them...
24 October 2009 at 00:34

Kalyan Karmakar said…
Memories indeed. it was so difficult to get you to sit still when we started. i think Pupai couldn't locate your id till I forwarded it to her. She told me that she was searching for your id. Don't worry about the pics. I'll pick them when I go to Cal.
24 October 2009 at 03:07

Send Rakhi to India said…
Thank you for sharing this. Now you can Send Rakhis to India
and Rakhi Gifts to India online through this website http://www.sendrakhistoindia.com
28 March 2010 at 17:05