Chicken Kosha for the bad back

My bad back started a few years back after I picked up some heavy suitcases while returning from Goa, had an untrained massage at the beach there on my birthday, came back home and bent down to whack a cockroach ... ping!

Since then its been a series of intermittent painful stiff back moments, solitary confinements, life scarring experiences (MRI), unfashionable belts, acupuncture needles, homeopathic sugar pills, knock out pain killers, ginger steps and diathermy. The pain becomes fine for a while and then gets back like a nagging spouse.

The last two weeks have been ones of pain. Pain killers, diathermy, belt happened. But there was one thing which really worked.

Last Sunday I had friends over. Cooked four dishes. Not an inch of pain. Of course it helped that I am not one of Julia Child's 'servant less American housewives'. Having Banu to chop makes a huge difference.

Pain followed through the week.

Then we had another dinner yesterday. One of those who couldn't make it on Sunday wanted to come and have at least one dish cooked by me. One dish?. I don't do just one dish. So decided to replicate Sunday's menu - doi maach (which turned out well), Funghi Fellini (with spring onions and lime added this time) , kosha chicken instead of kosha mangsho as the group yesterday were not into red meat, pulao rice and remixed a Green moong daal made by Banu. Why mess with a winning mix? 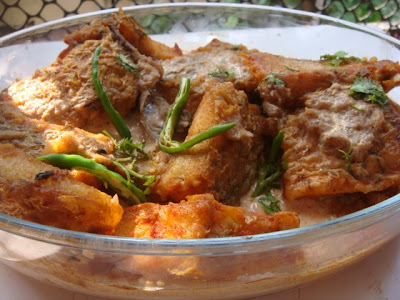 I was not pleased with the consistency of my kosha chicken in the past. I used to use the pressure cooker. That worked well with mutton as one wanted to bludgeon the meat into submission. Chicken kosha became watery though. A fellow blogger had suggested not using a pressure cooker. So this time I used a saucepan on an open flame. It turned out to be sublime. Just the way I envisaged it. I felt like the way Satyajit Ray must have after he saw his favourite film Charulata for the first time. 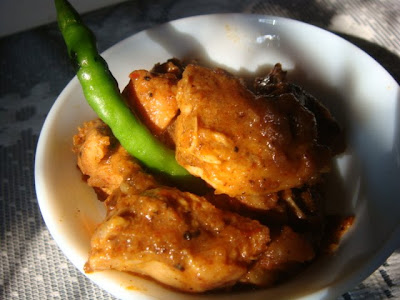 Our famous veggie friend, the one who lost 35 kilos, and has avoided food after that, got excited by the mushrooms again. I was really impressed when he pointed, out after tasting the dish, that I had used lime juice instead of vinegar this time. And no pepper. I often guess the ingredient after tasting a dish myself. Didn't expect a vegetarian who was off food to do the same. I saw him in a new light. He sweetly said that the mushrooms this time were even better than last time's. 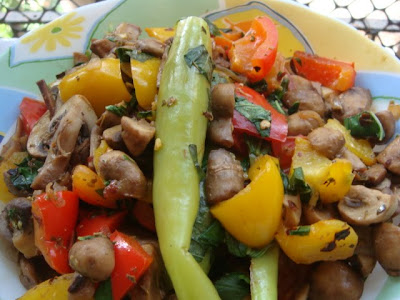 In fact their was another vegetarian last night who was a new addition to our dinner group. She has converted to vegetarianism. But loves the world of food and introduced me the Peter Mayle's amazing books on Provence. These book are highly recommended to anyone who likes to read travel stories centred around food. She got very excited by the daal which I remixed with some ghee, whole cumin seeds and green chillies. And got us a great selection of tarts and mousses from Birdy's.I am a sucker for a good lemon tart.

I just realised that the post was largely about vegetarians! What to do? The non vegetarians were watching a horror film, Paranormal Activity, in another room. I am a bit undecided on whether I prefer watching a horror film or stick my nose into a stinking gym shoe. Anyway I guess this makes up for the times when I call fellow food lovers and K smiles politely without understanding at the all the fuss is about.

Well to cut a long story short I had a good client presentation in the morning, then watched Kurbaan with some colleagues for an office farewell. Watching a movie in the middle of a workday was the high point as were the samosas. The movie was pedestrian and predictive. An equivalent of the spoofish Scary Movie series for terrorist films. Banu chopped, while I was at the movie. I came home and marinated. Went for a physio session. Came back. Cooked. Four and a half dishes in an hour or so.

Then a house full of friends, chatter and laughter, a bit of Teachers and a lemon tart from my Peter Mayle guru ... and my backache was gone.

Gia Fernandes said…
How can you have such a perfect life! Can you for once just burn the food or undercook or something, please????

No, I'm not kidding! And please loan Banu to me during Christmas, please!

Things go wrong occasionally like when I made the doi maach the first time. I curdled. Then had to make a few calls to salvage it.

Gia Fernandes said…
Who's asking you to part with her, I said loan her to me. Don't forget, every evening I will send her back with the spoils of the day.

As for the back, I told you stop sitting for long stretches. Teach Banu how to type, then you can dictate posts to her.
21 November 2009 at 19:06

Kalyan Karmakar said…
CC that's an idea. Plum had once written a side splitting ariticle about dictating novels to his secretary

By the way we had two dishes for the vegetarians and two for the non vegetarians
21 November 2009 at 20:56

Shaswati said…
hmmm - I see lots of lunches happening for ur readers! what about me who diligently reads (may not always leave comments) and even tries out some of the dishes. That too when I stay quite close! sob sob... :)
Trying out the mushrooms - funghi fellini today!
23 November 2009 at 11:26

Kalyan Karmakar said…
Shaswati...i guess the guys who make it are the ones who invited themselves. Hint Hint. I've been eating the leftovers since Saturday :( How did the F F, such a Presi aatel name, turn out?

Sharmila, absolutely, check out the Celebrate Bandra post. The Christamas decoration shops began from today. Making the chicken in the pot made all the difference. Nothing to beat mutton though
24 November 2009 at 00:49

Shaswati said…
Kalyan - the FF turned out really delicious! Am going to try out some ur other recipes. Btw - I have a very different recipe of doi maach - 3 different one - one is the like u have made, then one which is absolutely white looking n another that is tomato based -so looks red! If u r interested let me know - I can share.
Got the hint loud n clear! :)
24 November 2009 at 10:43

Kalyan Karmakar said…
Shaswati gald you like FF. i had some next day. Still can't figure out what the fuss was about :)

Please give me the recipes. My aunt made a reddish version when i went to Cal this time. It was doi based and very nice.