Dadu enters the nineties with a bang 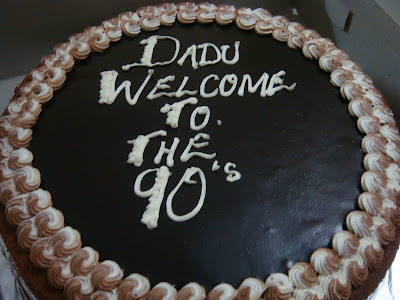 And now finally the big event for which I came to Calcutta, Dadu (Bengali for maternal grandpa), entered into his nineties on Sunday.

We threw a party at his place, Cookie Jar cake, chips, Sprite, Flury's chicken patties, home cooked channa (ghoogni) and naan and the very Bengali roshogolla ... all that were missing were party hats and streamers. 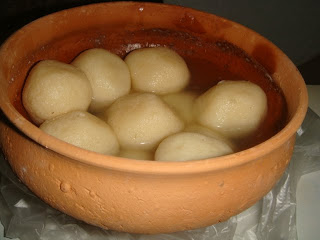 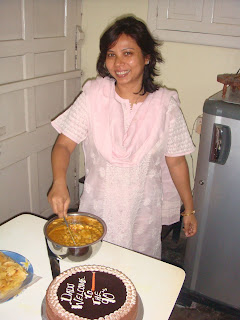 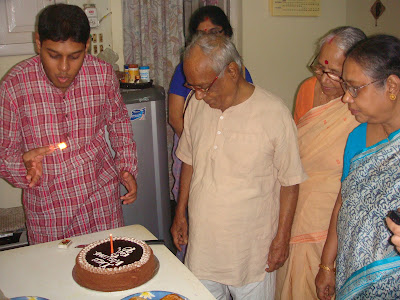 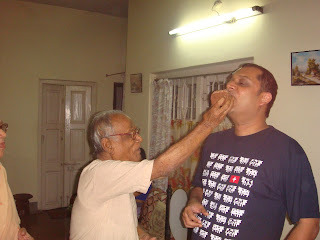 All his children were there, four out of his seven grandchildren, daughter in law, grand daughter in law through an SMS and his loving wife. Dadu was animated and happy and full of life as only he can be. He refused to wear new clothes and couldn't eat much of the party food at night but that didn't stop he from being the soul of the party.
It was one memorable evening of laughter, love, chaos, warmth, great food, photographs, video recordings, chatter, hugs, hand shakes, blessings and, for some inexplicable reason, Finding Nemo playing in the background. 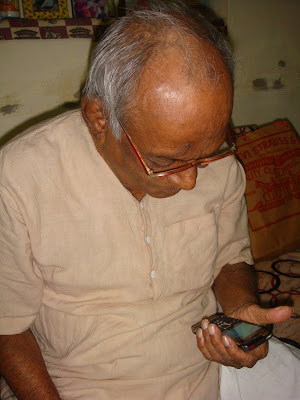 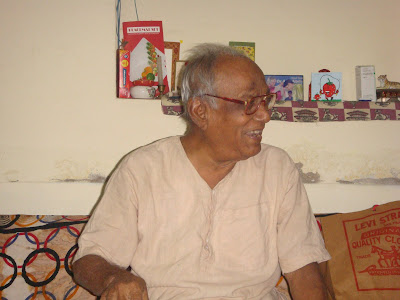 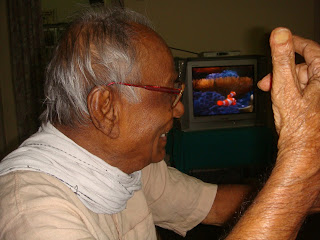 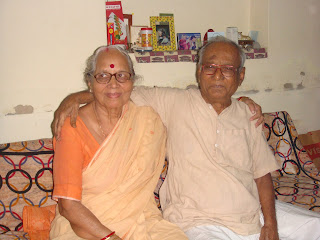 As I get ready to call it a night before I leave for Mumbai all my Dadu memories come back to me ... being told that all black and yellow cabs in Delhi were Dadu's cabs when I visited him from England when I was three, living with him for a year, the stories of World War 2 and concentration camps which he would tell me when I was nine, him and my grandma coming to visit us every evening after we moved to our own place, our trips by the 205 bus and river ferry to Howrah Station to sip H P apple juice and have sada dosas and take in the breeze of the Ganges, his attempts to make me laugh when I was a quiet teenager, and then calm me when I had a fear psychosis of Math and science, a role he repeated for most of his grandchildren, his being there to give us strength, courage, guidance and inspiration and helping a number of us make career choices, his love for the Railways where he worked, his yet unfulfilled desire to see his grandchildren as IAS officers, his pining to go to Puri and taken in 'ozone on the beach', his battling through heart attacks and frequent hospitalisations, to come out smiling to praise each and everyone of his grandchildren to whoever would listen, and his constant plugging of the fact the eldest grandson has showed the way to those who followed ...

I guess that's enough to keep me going till I meet him again. 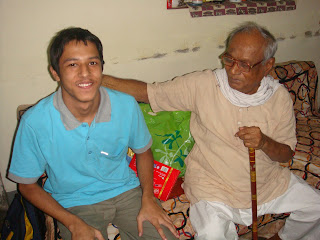 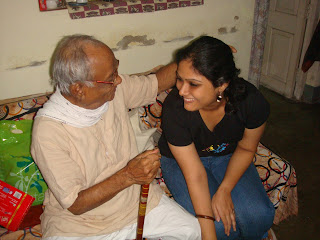 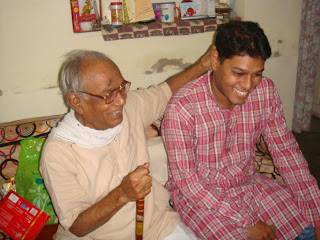 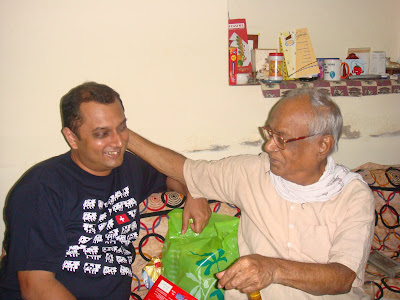 Unknown said…
Dadu Rocks !! Dadu always was (and still is) a source of inspiration when I feared any examination. One of my most cherished moments with Dadu was when he was invited to my school "The Assembly of God Church School" on 15 August 1997 to give a speech on India's freedom struggle on the occassion India's 50th Birthday. His speech was awe inspiring. It was the common man's perspective of the freedom struggle. How it was not only a fight for freedom but also a fight for survival. How the Dandi March inspired him....etc. Long Live Dadu !!
2 November 2009 at 11:59

Rhea said…
Awwww.. This is such a sweet post! He looks great. :-)) Grandparents are the absolute best! Please wish him a belated happy birthday from me! Loved the pics.
2 November 2009 at 21:19

Awesome ! Happy Birthday wishes to your dadu from me..

Kalyan Karmakar said…
Hi Somoo (HCOF), Scarlett, CC, Gaurav, Rhea, Pinku ...thanks so much. I plan to send a printout of this to Dadu and I am sure that he would love to get your good wishes.

Siddhartha (Shomu), yes I was there too and it was great to go back to the old school and see dadu give the speech... very inspiring as Gaurav said

K, we missed you and thanks for sharing the cake he sent for you

And folks spare a thought for Didu (grannie) who doesn't have an official birthday. Was surprised to hear she was 82 when I asked her the other day. She's always been there for us, working quietly, without a complaint, showering her love and luchis.

Sharmila said…
Here's wishing Dadu a very happy belated b'day! Why doesn't didu have an official b'day? And why haven't you guys declared one yet? Make the 1st of Jan her b'day and let her have a blast too. :-)
3 November 2009 at 18:41

Rhea said…
Ah yes, how can she be forgotten? I miss all the goodies mine used to cook.. Not to mention all the "pocket-money" I got! Grandparents are the absolute best and there can be no comparison.. :-))
3 November 2009 at 20:31

Kalyan Karmakar said…
Rhea, Sharmila ... my bro and cousin did announce a birthday for her sometime back. A la Christmas and Christ.

But you should see how excited she gets about celebrating his birthday :)

Smritaa, we missed you. I am sure he was dreaming of Shraeyas and you. He remembers you guys often and keeps praising you both

Harshad said…
Loved meeting this wonderful gentleman through your words, who's dished out many a delicious memory for you across the years!
Reading this made me so completely miss my own Dadu, or Baba as I called him.
May your dearest Dadu & Didu be the subjects of many a write-up for years to come.
And may the festivities never end! :)
7 November 2009 at 22:59

Kalyan Karmakar said…
Hey Harish thanks so much for dropping by ... your wishes will reach Calcutta soon

Hey Harshad, thanks man. I am sure your Baba joined in in the party too :) Coincidentally we call our father 'baba' in Bengali. It was my Baba's birthday yesterday on the 6th. And amen to your wishes of many more festive posts on Dadu and Didu
8 November 2009 at 00:37

Anonymous said…
Kalyan - Dadu K tor redhey khawano uchit chilo... That would have been a fitting gift from the oldest granson am presuming that was you:)
My dimma used to ask me to cook something for her 1 day everytime i went to kolkata and would then feed all of us a bit of that from her plate before she ate:)
you are lucky you have both dadu and didu mine are both gone. Dimma passed away 2008 Feb at the age of 96 and washed her own clothes a couple of hours before she had a cerebral attack and never came back.
Wish both of them a century and also since didu loves celebrating dadu's b'day why not have them celebrate their b'days together? They've shared so much in life its only natural to share a b'day
8 November 2009 at 18:40

Anon (N)...thanks so much, I have cooked for my mom and bro so far. Dadu only likes Didu's cooking. That's a tough act to follow :)

Sending my prayers for your Dadu and Dimma who, I am sure, are happy upstairs looking after you
9 November 2009 at 00:41