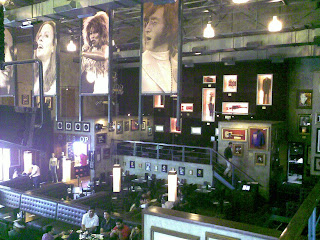 Hard Rock Cafe is a slice of Americana and a capitalist rock icon for folks across the world.

Mine is a very unique take on this international phenomenon. I am not much of a night clubber anymore. This probably explains what I am about to write.

Consider the facts. It is in the Bombay Dyeing Mills compound near Kamla Mills. It is surrounded by office complexes in the converted Mill Lands of Mumbai. It's fairly empty in the afternoon. The music is nice, classic rock and not too loud. You can hear each other speak. It is dimly lit and feels quite soothing and langurous in the middle of the concrete desert that is Parel. There is an amazing sense of space when its empty. Hard Rock Cafe is quite large by Mumbai standards. It has high ceilings and two floors.

You can stroll around the restaurant. Check out the rock and pop memorabilia - Alice Cooper's guitar, Madonna's bustier (the red one in the pic below), Spice Girls (skirt, black jacket, pink slip in pic), Elton John, Prince & Kylie Minogue's concert outfits, Ray Orbison's guitar, John Lennon's radio and so on. Or just laze and plonk down on the sofas. 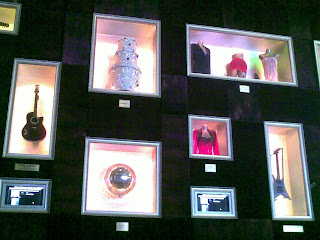 They have a lunch deal which is quite neat. About 300 Rs (6 USD) gets you the 'soup of the day', main course (from a list) and a soft drink.

We went there from work a couple of days back.

The soup of the day was mixed veg. It tasted like a Creole Prawn Bisque without prawns. Came with some nice and soft garlic bread. The soup was lukewarm. I asked them to reheat it. Which they did. The service was quite friendly, prompt and well informed. I had an angry tummy and wanted something bland. My order of blackened penne with cottage cheese lived up to this. I couldn't see any blackened part. It was creamy and milky. Devoid of any salt. Portion was huge though. 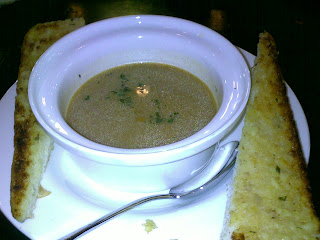 The food that the others ordered looked good. And most of them liked it too. What I liked was that there was quite a varied range ... pasta, Indian chicken curry, Malay fish curry, burgers (huge and famous apparently), sandwiches and salads. This helps if you are going in a mixed and varied group.

Plus a la carte, coffee and desserts. That's more expensive. And booze of course.

I didn't like my food. So why am I recommending Hard Rock Cafe then? I said it is a good place for the white collared to hang out in the afternoon. Well heeled and yet not too expensive.

Don't expect any Michelin stars though

Scarlett said…
I've been to a couple of Hard Rock Cafes outside India. The one in Vegas is HUGE, so is the one in Myrtle Beach, South Carolina. The one in Mumbai is tame in comparison & I don't like the food at all. The only good part is the interiors.
19 November 2009 at 11:09

Kalyan Karmakar said…
wow HRC Vegas would have been some experience. Actually I din't like the food too but quite a few did and I thought it was a good hang out zone
19 November 2009 at 13:21

Sharmila said…
I don't have much to comment on this post .. am unfamiliar with HRC ... but Kalyan the header snaps are turning dangerous by the day ... I mean to hungry folks like me who visit after a missed lunch. I'll leave before I start hallucinating. :-)
19 November 2009 at 16:22

Moonshine said…
I like HRC here in Bangalore better than Bombay. The food there was not much to talk about, I find the food here better. HRC at lunch is nice I agree. :) They all dance too.. at certain points in time.. to YMCA!!! Its good fun to watch.
19 November 2009 at 18:59

Scarlett said…
The Vegas Hard Rock is spread over more than 40000 sq ft, has 3 floors & the world's largest rock shop. And they have some really cool memorabilia, not to mention they make mindblowing green apple martinis! It's my favorite Hard Rock thumbs down!

Kalyan Karmakar said…
Sharmila, missed lunch? That's a tragedy. the picture is of the lovely canapes that we had at Switzerland. Their basic malls were full of them... smoked salmon, prawns, tuna... just name your ecstacy. A far cry from big bazar Dhoklas

Moonshine...no dancing when we were there though