The magic carpet ... Persian Darbar to the rescue 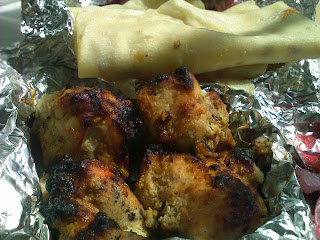 I launched into a full frontal attack of Persian Darbar, Byculla (PD), a while back. Their greasy food really took my goat.

I have had to eat the humble tikka since then.

A colleague of mine introduced me to the 'white chicken tikkas' of PD recently. She claims to have tried everything on the menu and reached the conclusion that the reshmi and malai chicken tikkas are pretty good there and go well with the oil soaked, soft rumali rotis.

I normally get vegetables and roti cooked by our maid, Banu, for lunch. But she is often as elusive as the cyclone which was supposed to have hit Mumbai yesterday. In such times I am left to the uninspired experiments of our canteen. I lift up the phone the moment I hear the canteen guy murmurs sweet nothings such as Chinese chicken fried rice with rajma masala and cry out to PD for help.

PD's reshmi and malia tikkas are indeed quite succulent, well flavoured, spiced just right, come in a lovely creamy marinade and are just the thing to power one for the rest of the afternoon. The rumali rotis are softer than usual. I am sure that there is a not so innocent explanation for this. Think maida. Think ghee or oil.

They wrap the food in foils and occasionally sent paper plates too. Quite a tidy lunch to have at one's desk.

A plate of tikka and two rotis come to about Rs 120 (2.1 USD) and is slightly more than enough for one person.

Ipsita, thanks for the recommendation

Sharmila said…
Will they deliver here? :p
I somehow prefer tandoori tikkas to malai kebabs .. I guess that white colour puts me off a little. I make this strange thing up ... roll up kebab+some sliced onions+chopped green chillies+chilli sauce+pepper powder ... as hot as I can make it ... but only when am having them at home. :p
It's alright ... you can call me crazy aloud. :-)
12 November 2009 at 18:21

Kalyan Karmakar said…
Sharmila, your 'Sichuan' kebabs sound like quite a yummy mouthful.

Actually 'white' was perhaps the wrong word. It's creamy actually quite nice. These sort of places go overboard with food colouring in tandoori etc

I'll try to get them to send same to Pune

Hey SarahKate...thanks for dropping by at my blog. You should come to Mumbai and enjoy the kebabs directly :)

Some say I obsess to much about my lunch at work. I say, why work then?

Try the chicken kali mirch the next time....thats the best

Kalyan Karmakar said…
Ipsita I just had some soggy yellow rice with chicken for a quick lunch at the canteen.

The thought of the kali mirch brings tears to my eyes