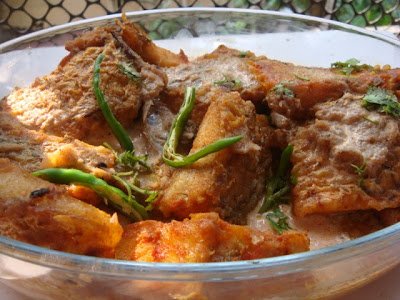 Sunday afternoon was billed as a kosha mangsho afternoon for our guests.

I wanted to make a rui fish dish which was different from the garam masala based kosha manghso. So rui kaalia wouldn't work. Both were brown, garam masala and fried onion gravies after all.

My next option was the curd/ yogurt based doi maachh. Problem is that I had never made it before. I wondered whether it would be fair to experiment on our guests.

Still, kosha mangsho done, I set off on a doi maachh (fish in curd) journey.

Disaster struck as the curd base for the curry began to curdle once I put it on the stove. The sauce would have been at home on a lab petri dish. There was no way that I could serve it to the gang of Finely Chopped readers who were coming for lunch. I wouldn't touch it myself. I sat down flummoxed, the fight gone out of me.

I called up my friend Nilakshi who had earlier given me her recipe for doi maach. N was at Gurgaon cooking chicken and shukto for her niece's birthday. She stopped, heard me out and discussed her method again. It seemed to make sense and my anxiety attack began to fizzle out. I decided to try her recipe with one moderation. I would use the microwave in the finishing stage. Compared to an open flame, the heat would be more even and regulated and possibly more gentle for the sensitive curd. Banu and I consulted each other. She too felt that the curd had to be added at the end.

I knew I was taking a risk as the dish had to be cooked just before people ate. Which meant that it could have gone wrong as we were about to sit for lunch. I didn't have a back up plan. I had to get it right the first time. There would be no second chance. No prisoners would be taken.

I steeled myself and decided to give it a shot. My instincts told me that the new method would work. And it did!

The result was sheer poetry in curry. I was thrilled and jubilant to see the dish make a Phoenix like comeback. I had cracked the doi maach code. All thanks to Nilakshi.

So without further ado, here's my sure shot doi maach recipe: 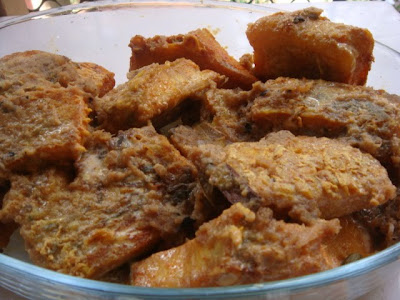 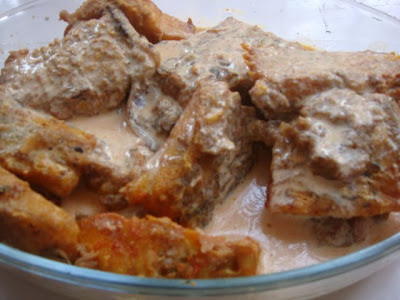 The final moments (my only contribution to N's recipe)

The result was a dish that was subtle, light and ethereal. A far cry from my first flopped attempt. Nilakshi and and I had cracked the code.

So who's the daddy now?

Lesson for the day : if you are using curd as the base for your gravy then add it at the end. It curdles in heat otherwise.

Kalyan Karmakar said…
Hi Somoo, I add mustard with I steam Hilsa with. Let me know how your experiment goes :)

Amitabha, Thanks for dropping by. You know, I probably did use them. Should have otherwise :) Will update post

Amitabha said…
Kalyan, I think the recipe on your blog is the correct and better one. And I think Sharmila's suggeestion to add besan is a good one. Will update my blog post to point to yours :)
18 November 2009 at 12:17

Kalyan Karmakar said…
Thanks Amitabha. Must admit that this was not my recipe. It was based largely on my friend's recipe. I rarely follow recipes and am quite untrained in cooking
19 November 2009 at 00:00