A commoner's take on a Nawabi dish: Chicken Rezala

Anyone who has eaten at the Muslim restaurants of Calcutta, in the Shirazs, the Nizams, the Zeeshans, the Rahmanias, the Ameenias, or the Badshahs, would have had the biriyanis there. These are biriyanis which most Calcuttans have given their hearts to. Fragrant rice, subtle masala, well flavoured meat, the mandatory boiled egg and the much sought after boiled potato ... very different from the heavier biriyanis of the rest of India. This cuisine was introduced to the city when the Nawabs of Oudh sought refuge here after the British defeated them.

But there's a lot more to these shops than biriyani. Some of the landmark dishes range from the lofty Chaaps (a meat dish in a very thick, grainy masala paste) to the delicate Rezalas. They are often had as accompaniments to the dryish biriyanis. Or with parathas or roomali rotis.

Rezala has more gravy than chaap. Chitrita Banerjee has written about the popularity of rezala in Bangladesh on the other side of Bengal.

The gravy in Rezala is translucent. The colour is off white. It normally has a thin film of oil on the surface when served in restaurants.

It is an incredibly well flavoured dish. A harmony of the Nawabi taste of ghee, tempered by a slight tanginess brought in by curd, balanced by a subtle sweetness of sugar, climaxing with majestic whole spices or garam masala such as green cardamom, dry red chillies and bay leaves. 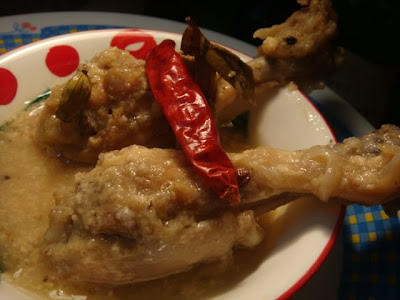 The amazing thing is that this exotic princess of a dish is quite easy to make at home. Its subtlety seems ephemeral but is actually quite well proletarian. In fact you can even make a very healthy version of it by not adding any ghee at all. Kainaz used to do that. If you make it with chicken, for example, the natural oil of the chicken and the curd combine to make quite a mesmerising dish. So you get the royal flavour without bothering the Opec for oil.

It is a useful dish to make if you have a sore throat. This is the season for sore throats, and both K and I are down with it. That's why I asked Banu to make it when she called me at work for instructions on what to make for dinner. I didn't have the recipe as K used to make it earlier. So I Googled a few recipes, made my interpretation and then instructed Banu on what to do.

Here's the recipe that I gave her (translated back from broken Hindi):

Take four chicken drumsticks. Put these in a pressure pan. Add 100 g of whipped curd, paste of one ground onion, one tablespoon garlic paste, one tablespoon salt and one teaspoon sugar to the chicken in the pan. (Ideally let this be for half an hour)

Close the lid and pressure cook till you get three whistles. Then let it simmer for ten minutes on a low flame.

Take a tablespoon of ghee heat it and add 5,6 green cardamoms (elaich), 2 bay leaves and one dried red chilly (not if you have a sore throat) to the hot ghee.

Open the pressure cooker lid and add the ghee and spice mix to it.

The oil/ ghee free version could be made by adding the whole spices to the marinade before pressure cooking. On the other hand you can add a lot more ghee if you want a restaurant like feel.

The dish turned out quite well. You can top it with a few drops of rose water if you like. We had it with plain chapatis. The perfect royal broth for angry throats, discerning palates and hungry tummies.

Disclaimer: I did not make the dish myself and instructed Banu over the phone. So I wouldn't know if she instinctively made some changes like adding water, etc. I wouldn't advise the first time cook to try it himself till I cook it myself and ratify the recipe.

Gia Fernandes said…
Yumm! I first had Rezala (with mutton) years back at a Bong friend's place in Madras. It is so clean and simple in taste. I should try your version with chicken soon.
Btw I am removing Banu's nazar also next time. She is really good if she can follow instructions on the phone and cook. I consider myself lucky if my maid remembers to turn the taps off!
30 December 2009 at 22:57

Rezala sounds really simple, am going to try it soon, before that there is a chicken dish from yore
31 December 2009 at 00:26

Kalyan Karmakar said…
In fact C, I had wonderful cal styled biriyani at someone's house in Chennai soon after I moved to Mumbai, the city of muddy biriyani

Yes, pl keep the kala teeka ready...she follows directions well...and forgets them after that :) Which is good in a selfish sort of way

Scarlett said…
Funny you should write about the Rezala. A got mutton rezala from Zeeshan for me once. There was a thick layer of oil floating on top of the dish, which I drained out. The mutton piece also had a big fat layer of fat which I cut out & threw away as well. Needless to say, A was horrified. His exact words: "But that is the best part!!" LOL
31 December 2009 at 10:36

mentalie said…
i am so delighted i discovered your blog...everything you write about sounds like comfort food, which my favourite kind :) HAPPY new year!
31 December 2009 at 14:45

agent green glass said…
oh rezala. you kalyan have just touched upon the stuff that makes me grin from ear to ear.

rezala, pale and with one dry red chilly floating on top. served in a mattir bhad. you try some of the spicy yet sweet gravy, light and yet filled with oil. then pick out the mutton that's been dipped in that gravy for ages, and it melts in your mouth, as the meat just slides off the bone.

Ushnish Ghosh said…
Dear Kalyan
Great dish with remote cooking..I have never eaten chicken version of Razela!!
this is not a Badshahi razela , this is poor mans curry because I eat Razela base preparation 10 days a month ha ha
Very nice indeed, of course I use Sabir's ( close to sabir's I mean) which is slightly different in spicing and cooking method. I am collecting the photos of various Razela ( chicken I dont cook ), God willing, Laziness and Old Monk permitting will post that.
Happy New year
31 December 2009 at 16:53

Kalyan Karmakar said…
Scarlett: hope you are having a great time at Delhi. I can completely see where A is coming from. Motton without fat would be as alluring as a sizer zero anorexic super model

AGG that was so sweet. Meeting A and you were one of the best things of 2009...and here's to the promised pork balchao

Hi Ushnishda, hope you had a great new year's eve. I am so looking forward to your Chicken Rezala Calendar
1 January 2010 at 22:36

I had come earlier, read your version of the rezala and decided would comment only after trying it out for myself.

So here is how it went:

First things first, we decided to skip the pressure pan and cooked in an open non stick heavy bottom pan.

Also added to green chillies to the onion paste, marinated faithfully for half and hour. In view of not using the pressure cooker, we added about a cup of water and let the thing cook under a lid for about fifteen minutes...and then added the ghee tadka as per ur receipe.

The fragrance seemed to my partner like a hot suji halwa inviting and aromatic.

Waited for the water to evaporate some more added the rose water.

We ate it with hot chappatis and are happy to report that it tasted equally divine.

Kalyan Karmakar said…
Hey Pinku, thanks a lot for sharing this. In fact slow cooking in a pan is the way these dishes should be done.

Green chillies would be a nice touch. We even add it to pasta!!!

bristol plasterers said…
Mouthwatering recipe. Thanks for sharing this.