Mainland China from the Speciality Restaurants group has opened a branch at Bandra. We wanted to go on Sunday but they didn't accept reservations. We skipped it. I was more upset because the group didn't launch its other restaurant, Oh Calcutta, instead. So Bandra still remained bereft of Bengali restaurants.

But Father Christmas smiled on us two years back when Candies was opened just beside my house. There were more goodies in store this year too.

Ips got me rolls from Hangla at Andheri, when she came to visit me while I was convalescing. She texted me a couple of days back. The SMS read 'Hangla has opened where Calcutta Roll Centre used to be. Now you can order rolls from home too'. 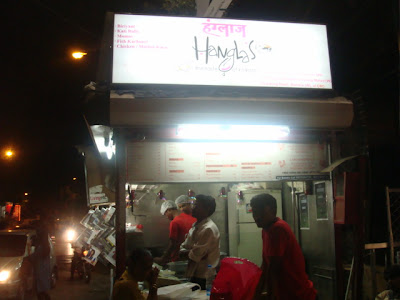 I told Kainaz about this who immediately suggested that we go to the new Hangla and give the chicken curry at home a miss. So off we went. I broke into a smile as a I saw the Hangla banner where the late, unlamented Calcutta Roll Centre used to be. The new Hangla was apparently a couple of days old. The outlet is on Linking Road Bandra, beside the B P Petrol Pump and opposite Amarsons. 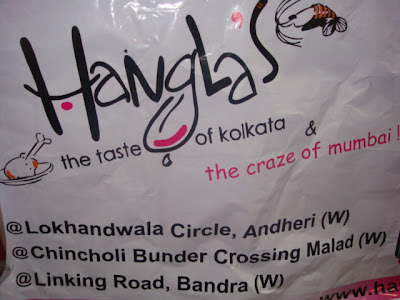 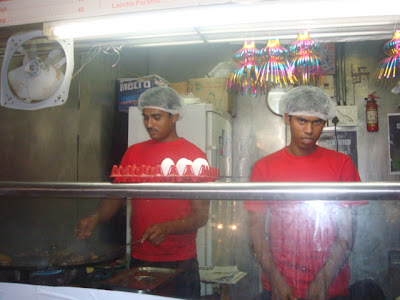 We ordered a couple of mutton rolls. And here's a lesson. Hangla's mutton rolls are sublime. The rest? Well, pedestrian.

We brought the rolls home, popped them in the micro for 30 seconds. This was a couple of hours after they were made. Yet they remained fresh. The paratha wrap was crisp, slender and delicate. An aptly understated coating to complement the mutton inside. The mutton was soft. Well spiced. Esoteric. They fried the onions on our request. The sweetness of caramelised onions gave the right balance to the fiery green chilly pieces. The sort of oily, cholesterol laden sinful pleasure which you keep going back to in a trance. 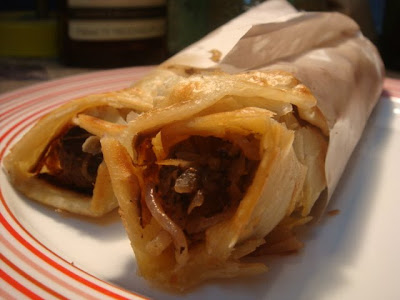 I picked a chicken biriyani too. The best thing is that they offer half and full portions in biriyani. The half portion was just right for one person. Any full blooded Bengali who sees the photo below will know that this is the real Mc Coy. Boiled Egg? Check. Boiled potato with slightly crinkled skin? Check. One piece (!) of meat? Check. (the leg piece was at my request). And the rice? Fragrant. Firm. Separate. It was as if each grain was kissed by a princess. 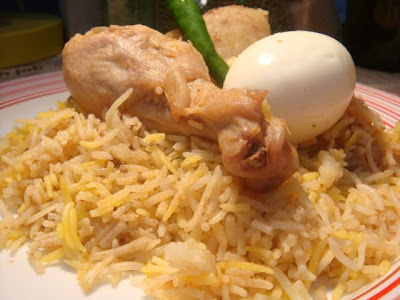 A splendid example of the sort of biriyani which spoilt all other biriyanis for Calcuttans. I took each bite and smiled like a baby in its mother lap. Soaking in the familiarity and feeling at peace.

Their other cooked fare, available at the Andheri outlet, are not available at Bandra yet. Which is fine. They are not known for the other stuff. They have kosha mangsho at Bandra but I don't see myself ordering it in the near future after last time's experience at Andheri.

So go to Hangla. Buy a mutton roll . And spare a thought for the little shop called Chowringhee Square that sold rolls in the Papa Poncho lane at Pali Naka for a few months in the early 2000s.

Post Script: 'Hangla' ( hang - la) in Bengali means greedy. It is largely used in the context of food. The tone is acerbic. A strange name for a food joint if you were to ask me.

Magical Homes said…
this is very good news indeed. i used to visit the lokhandwala outlet pretty often, it being stone's throw away from ex office. I had something called 'golbadi' mutton ( with luchi)at oh calcutta express at andheri last week. heavenly!!
17 December 2009 at 15:24

Kalyan Karmakar said…
M D, Golbadi is a famous joint in Shyambazar in North Calcutta. A bit of a legend like Bade Miya here in a different context.

Kalyan Karmakar said…
You must Amitabha. And I was told that their chicken biriyani is not as good as the mutton one.
17 December 2009 at 16:17

Kalyan Karmakar said…
I have the menu card Shaswati. i will go home and update it. They said they will deliver. No minimum amount. They are new after all.

Scarlett said…
The rolls look yummy! But you know how it is with me & Calcutta biryanis...I'd take my Delhi Darbar/ Persian Darbar/ Noorani chicken tikka biryani over the Calcutta biryani anyday :)

Incidentally, some of us from work went to 'Alibaba' for lunch the other day. The way the Bongs were salivating over the Special Mutton biryani (with 2 pieces of mutton, an egg & a potato) was really funny! 'Alibaba' has also introducted a "diet biryani" - biryani made in low cholestrol (Sunflower) oil...LOL
17 December 2009 at 17:02

S said…
amazing news!!! :) share your fond hope that Oh! Calcutta finds a place in the Bandra food scene soon! i suppose a calcutta club is still a far way off, though...their biryani is just amazing!
17 December 2009 at 19:50

Pinku: they were really good, no Nizams here though :(

Jessica: its unforgettable. Hope you get to have them some day

S: maybe we can do a reverse fast and continue eating till they open an Oh calcutta here. True the Calcutta Club biriyani is pretty good. I like the half portion idea at Hangla. Just right for a single eater
18 December 2009 at 01:13

Kalyan Karmakar said…
ah yes K, not the rolls and biriyani which came to Rs 210, but thanks to shop with ridiculously expensive bedsheets beside Hangla
19 December 2009 at 13:36

Miri said…
Sorry for going completely off topic - but this just made me giggle - "as if each grain was kissed by a princess" - this after reading the preceding sentence LOL!
Sorry again - my juvenile side found this too funny ;)
21 December 2009 at 14:40

I think I will let it remain and hope that I am not reported for objectionable content
21 December 2009 at 15:23

udayan said…
calcutta roll center has closed down their bandra outlet ??? sad ... I kind of preferred them over hangla's, lokhandwala.
25 December 2009 at 15:18

Kalyan Karmakar said…
Udayan thanks for dropping by.

CRCs the standard of CRC rolls had dropped. I personally feel that Hangla's mutton rolls could match up to the best of Kolkata's
27 December 2009 at 00:49