The Pianist .... breakfast at one thirty

on December 12, 2009
Folks have occasionally written in angrily about the photos that I put up here. About how they see the food photos when there is no food at home. Or when they are on a diet. And feel tortured.
Something similar happened to me today.

I woke up at about twelve this morning (!). Last night's pain killer had helped me get over the previous night's back ache and muscle pulls. K and I were making plans of going to Candies for breakfast. That's when our landlord's brother, R, dropped in on some work.

He is a genial Goan. Salt and pepper beard. Twinkling eyes. Smiling face. A raconteur who loves his food and drink. Something which possible explains how we came upon this amazing house.

He settled down and began to spin his yarns. Soon stories of his weekend trips to Goa filled the room. Places where you get great chicken Cafreal. How smaller prawns are better as the bigger prawns often 'taste like leather'. Stories of neighbours who spy on him with their binos while he has a nightcap at the bungalow. The twenty mackerels that he buys for hundred Rupees at the Goan markets. The barbecues that his boys make for him on his barbecue at Goa. The shacks in South Goa which serve authentic Goan food. The names of some that he rattled off.

Just the sort of conversations that I love.

Except I was hungry. I felt like a character in an art film watching the rest of the world eat on a hungry stomach. I was fasting and I didn't even want a separate state.

R then shifted gears and began to tell us about his encounters with various doctors. He struck a chord with his MRI trauma. He told us his bargaining point with his doctors ... 'no compromise on drinking and dancing (!).' (remember we are talking of a very senior, erudite corporate executive here with no visible dreadlocks.

I was about to faint when our merry visitor left.

It was 1.15 PM and I decided that it would make sense to go straight into lunch. I never skip breakfast and this showed how hungry I was.

Broken toe and aching toe be damned. I drank a glass of O J and hobbled the hundred metres from our house to Candies. The Christmas decorations at Candies were like a mirage calling me as I navigated each step tentatively. The first time that I walked so much since I broke my toe more than a week back. 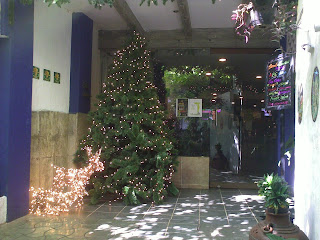 Thankfully K managed to navigate the hungry hordes and get me a roast chicken. 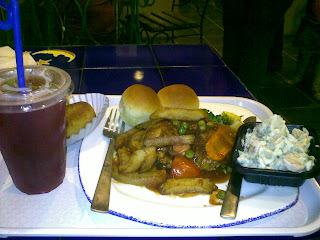 I could focus only after I took my first bite. I was in a bit of daze till then as the photo shows. 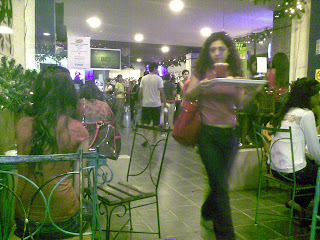 Shaswati said…
Ha ha ha - this reminds me of my post grad days on JNU campus.Every month 1st week we would go out and binge, 2nd week have the hostel food & last 2 weeks we would somehow manage by sharing, etc. On these last 2 weeks it was my duty (almost) to keep on talking & literally fantasizing about all good food while others will keep listening with rapt attention and all of us salivating in our minds! In fact, recently I met one of those from the gang and she quickly said -"I hope you have stopped doing those sadistic trips on food". All the while I used to think I was doing a great social service to all us hungry souls by ending the narration each time with some descriptions of dessert!!!
13 December 2009 at 11:57

Kalyan Karmakar said…
You are very lucky that you didn't get lynched Shaswati. How did you manage that ;)?

When we were hungry in Presidency than we would turn to the girls who got more pocket money than us. Being in a minority helped.
13 December 2009 at 21:37

hamaarethoughts.com said…
..seems like the food costs same as in US..but still its cheaper.. I would say, compared to US..but may be in indian currency might be more..as it sounds..coz of inflation..but Dude u seem to enjoy so mch..different varieties of food .. and I think..somewhere in them there will be an indian flavour..enjoyed by everyone..
13 December 2009 at 22:45

spice and more said…
Reminds me of the story my dad loves to tell - of buying mackerels for Rs 1 each. Ofcourse that was a long, long time ago.... but it does make me laugh to hear the story change to 20 mackerels for Rs 100.
I hope you took notes about where to eat in Goa, exactly which beach shacks in south goa....I am going to need that advice soon! :)
14 December 2009 at 05:45

Spice and More...even I have my tales of 12 phuchkas (paani puris) for one Re and so on