Read this later: Hurry to the Bandra Gym Christmas Fair


I have a new food informant who wrote in after I put my mail id on the blog. She prefers to stay out of the limelight. I have decided to refer to her as Agent M (M for Marzipan) in the blog till she decides to come out in the open.

My fellow Finely Chopper, K and I were gearing up for the Bandra Gym Christmas Fair ever since Agent M told me about it. We had made our plans in advance. We went yesterday to avoid the crowds on the last night.

We couldn't have chosen a worse day. I was sleep deprived. And then was bursting from an ajino moto overdose at the Noodle Bar Buffet in an office lunch outing. I was so tired that I crashed out when we then went to the 4 PM show of Avatar. Partly because the story didn't keep me awake.

The rest of our Bandra Gym gang, specially the ad folks, had been working late for many nights and looked haggard. 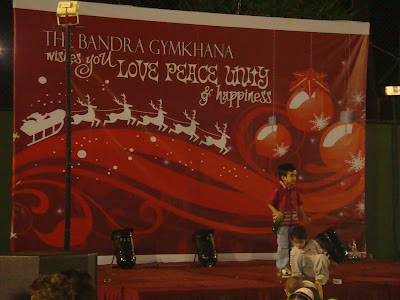 The four of us finally reached the Fair. A huuuuuuuuuge affair. Millions of little 'stalls' set up on bare tables in the large ground. Trinkets, shimmering party wear, tees, handicrafts, kebabs, marzipan, sorpatel, Goan sausages, vindaloos, gelatos, roast tongue, prawn curry, Bottled Masala .... everything was on sale. Most of the stuff was made at home by enterprising housewives.

There was a dance floor which meticulously shut at ten. The bar, the most popular, point shut at eleven. Most revellers made trips back with three to four glasses of whisky in hand while we gingerly nursed our Cokes.

Our bones were weary but the flashes of red in the posters, in the sequined dresses and in the vindaloo mixes fired us up as we chatted into the night ... our cell phones tucked away out of sight. 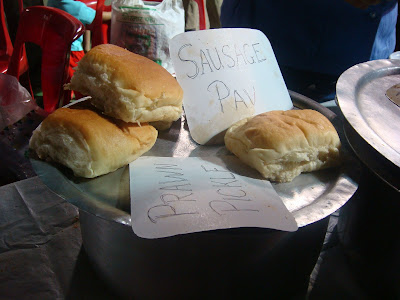 We first went to a stall run by the restaurant, Simply Goa. We had some nice Goan sausage chilly fry from there. The sausage was slightly soft and boiled rather than fried. The sourness was tempered down a bit. Full of potatoes the way we like it. A nice start once we found some plastic chairs to sit in. 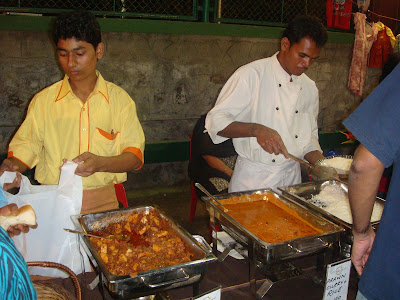 We then moved to Jonas' stuff from the Bandra Gym. We picked up roast honey chilly pork which we so loved last time. It was a bit dry this time though. Not as full of chubby fat.

Had the standards dipped or were we too drained to enjoy it? I, for one, wasn't hungry to be fair. 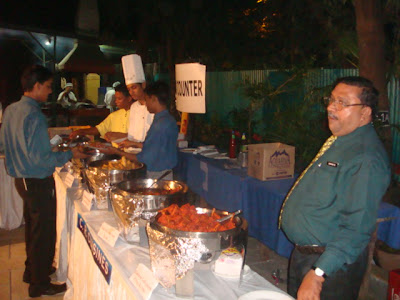 Our next stop was a stall run by a lady who had come all the way from Irla. Pork Sorpatel, Vindaloo, prawn pickle, roast tongue ... she had it all 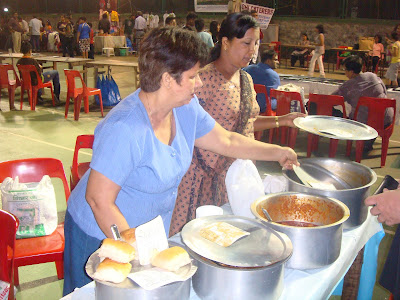 I am not much of a vindaloo fan but hers was was really good. The quality of the pork was phenomenal, tender to the T. The curry was deceptively red and not fiery. The spices were balanced just right. The curry teased you but didn't shock you. A chirpy red happy curry is how I would put it. 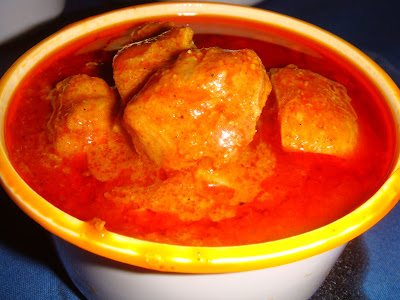 The prawn pickle was a hit among our group of three Bongs and a Bawi. Millions of tiny prawns. A very thick sharp masala paste as the base. Yet not pungent or overpowering. Each bite invited you to have one more. 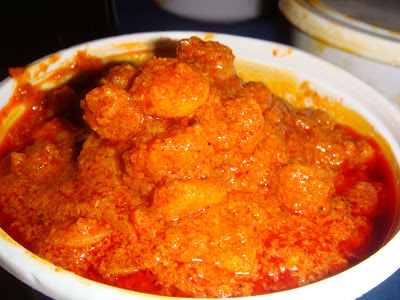 The sorpatel was very interesting. A dry and different take on this curry based dish. The little pieces of pork, organs and fat gave us many moments of scrunchy joy. This was the one dish which we fully finished.

I remember that the sorpatel which we had last time at Bandra Gym was different too from the ones we have had in the past. Wonder if sorpatel, like butter chicken, lends itself to many interpretations. 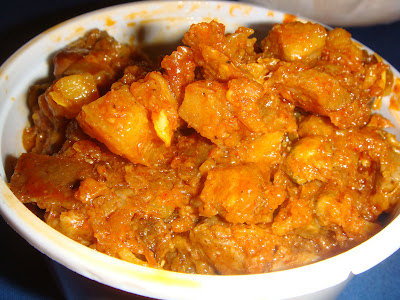 (Update: I put this question to Mrs D Sousa of Marks Cold Storage this evening. Aunty said that in Goan sorpatel the pork is cut into smaller pieces, fried, is slightly sweetish and made with ground spices. The East Indian version apparently is made with larger pieces of pork, which are not fried. It is no sweet and East Indian bottled masala is used)

We couldn't finish the vindaloo and sorpatel. But they came in little plastic containers and we got them home. Am looking forward for lunch.

A round of gelatos from the Gelato Italiano stall and we were smiling again.
The Bourdain moment
We had walked in to the evening battle weary from a week which had sapped the life out of us. Some big smiles all around, lazy chats, lots of pork, dancing taste buds, giggling kids, boisterous families, gelatos, a trundling Santa Claus, whiskey breath and we suddenly realised that the weekend had began. That we could rest our work entities and let our Avatars live it up for a while.
Notes:
Bandra Bites festival food Goa Mumbai highs

Miri said…
AAArgh! First my brother calls and brags about how he went and had sooo much to eat ya da yada yada. And then I have to SEE it all described in pics and words here ???!

Kalyan Karmakar said…
Aaaah, i hadn't got any comments in the last couple of days and was feverishly checking the blogger stats.

Jessica@Foodmayhem said…
I feel like food festivals and fairs should be cheap but the ones in NY have gotten so expensive. =(
21 December 2009 at 20:23

Ushnish Ghosh said…
Dear Kalyan
Thanks for visiting my blog. I feel good to hear that the Mangso kasa went off well and you really treated your guests with choicest Bong dishes!!!
Your blogs are very nice and as all your writings are hight Funda , I am reading slowly.
Will be back soon..Have a nice week
21 December 2009 at 23:47

Kalyan Karmakar said…
Hey Jessica...there are quite a few expensive ones here too. Its just that the bandra gym one seems to be more of a Christian community fair. Meant for families to enjoy and make some money. Most dishes ranged from 100 to 200 Rs (2 - 4 USD)

Thanks Ushnish and thank you so much for dropping a comment. They loved kosha mangsho and actually liked the alu posto and todka daal even more. They asked me foe the recipe of the alu as I explained that the daal was made with Cookme's ready mix. Look forward to more food stories from you
22 December 2009 at 01:44

Kalyan Karmakar said…
well K, if its any consolation, you were competing with pork for blog space
28 December 2009 at 00:54