'What is brunch'? ... Global Fusion Bandra 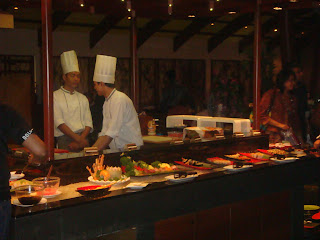 V saw my Facebook comment on Sunday and asked me whether Global Fusion was a good place for a Sunday 'brunch'.
I asked her about her definition of a 'brunch'. After all G F wasn't an omelet, waffles AND main course place.
V replied, 'Brunch - a lazy place to chill on Sundays'.
Well Kainaz and I were there with a few friends on Sunday afternoon. A couple who was about to get married in Calcutta. The bride to be had just flown in from Chicago. And another couple who was going to Calcutta for the wedding.
We reached at 1.40 PM. Left at 4.30 PM.
We chatted lazily. The six of us stretched out. Didn't feel cramped. Most of us ate heartily - sushi, sashimi, wasabi, tempura, teppenyaki, sui mui, dumplings, steamed fish, ice creams and cake. There was no sense of urgency. We were relaxed. Well fed. Happy. Smiling. Laughing loudly. Reminiscing. And future gazing with the soon to be married couple. In those three hours we discussed the foibles of honeymoons, wedding menus, bus rides in Goa, the biting cold of Chicago, the super sized food servings of the US, Mithun Chakraborty, Amitabh Bachchan and Rjesh Khanna, Bandra Gym eating plans, my fracture, memories of our earlier visits to Global Fusion, the new Mainland China in Bandra and the absence of Oh Calcutta here and so on. 'Lazy' enough?
The only non lazy part was the number of trips that one had to make to the food counters. The food was such. It kept calling you. Thanks to my injured toe I did have the advantage of K playing the dutiful wife and getting replenishment for me. Though there was no stopping me during dessert time.
The service was quite helpful and the folks would get our teppenyaki and dumpling orders to the table. We skipped the main courses.
The three dishes which were stand out according to me were: 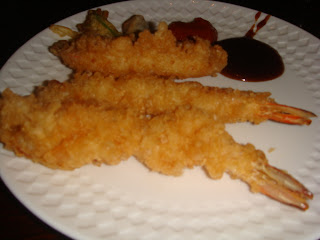 And you, it was a lazy place to chill on a Sunday.

God speed and congrats in advance for the wedding Mithu & Maiti. Your happiness and joy is infectious. Rahul & Irin, please eat on behalf of us at the three weddings in Calcutta:)
Post script.... I completely disagree with Mumbai Mirror's take on Global Fusion in the article on 'fusion' restaurants on Sunday. The writer dismisses G F as a place with (I am paraphrasing here) interesting starters which then degenerate into Gujarati wedding fare like veg fried rice, Hakka Noodles and packaged ice cream.
Well to start with, I agree, and had written earlier, that it's not 'Global' but 'Far Eastern' Fusion. Having said that, the starters have a good variety of Japanese, Chinese a bit of Thai (Tom Yum soup) and Tibetan (momo). The main course had a mix of regular Chinese (salt and pepper crabs), Indian Chinese and 'veg' Thai curry too. The good thing is that Global Fusion has stuff for more adventurous eaters and for those who like to stick to the regular. So everyone iss happy.
The desserts weren't Oriental. But anyone who has had the sticky coconut desserts of Thailand or darsan or date cakes would be fine with this. And who doesn't like Baskin Robins after all?
True, Global Fusion doesn't have representatives of every Mongoloid strain. But then we are not camels either.
Bandra Bites Mumbai highs Oriental

Rahul Ghosh said…
I hereby gladly undertake to fulfill the august responsibility invested by you.

Besides, "Global Fusion" is a misleading name to begin with, if the menu is heavily skewed towards Far Eastern/East Asian food.

And I think that is the undoing of most restaurants that try to be good or different. They start off as visionaries but fall prey to local demand at the execution stage. They can never be pioneers b/c they can't "create" a market. They'll always limit themselves to pandering to the market that already exists. And that is a sad state of affairs.
14 December 2009 at 16:55

Scarlett said…
Oh, the ideal brunch place to laze around on a Sunday afternoon would be Out of the Blue! Without question. Can't think of it's equivalent in town but Sports Bar maybe?
14 December 2009 at 16:58

Kalyan Karmakar said…
Scarlett...'Global' Fusion was a misnomer as I pointed out when I first wrote about it. It is an Oriental fusion.

Rest of MM's submission doesn't hold. Its starters have sushi and sashimi, a range of oriental salads - khimchi, sesame etc, tepenyakis, dumplings, steamed dishes. These cover a wide a variety and is not your staid Hungre Eyes stuff. Their soup and main course counter is a pick of China Gate stuff which diners who are not as enterprising would be OK with. Buffets, in any case, have vegetarian rice and noodles. I am not fond of Chinese buffets in any case as the stiff gets cold, starchy and clammy. But the live counter is really good here.

Kalyan Karmakar said…
Scarlett...OOB would be a good laze around place. So wd Basilico. tho Serendiptiy who went to Basilico recently concurred that the standards have fallen. She, incidentally, raved about G F too.

Serendipity said…
Ohhh noonoonono how could they do this o Global fusion. I'll take this up with this journo (who wrote our story in MM too) =) lol

scarlett, dont razz it till uve been there. this place is OUTSTANDING.

and like i told ze Knife, i am NEVER going to Basilico again. 2 attempts of bad service, mediocre food and a less than ordinary experience is a bit much.
14 December 2009 at 17:54

S said…
Serendipity, the Basilico at Bandra is still half decent, though I'll now add your name to the long list of people who are unhappy with the Basilico in town.:) Their standards have really fallen.

Scarlett, maybe a town version of a lazy breakfast/ brunch place would be the Moshe's cafe next to Yacht Club...it has an amazing ambience, and food to die for! :)
14 December 2009 at 19:44

Kalyan Karmakar said…
I was unimpressed by the food in my last visit to Basilico during the monsoon. Then Serendipity's report came in too. Don't plan a trip now with so many options around

S I have been to cafe Indigo which was nice. Moshe should be good too. We go to Yacht Club quite often and I suspect that their breakfasts would be quite lazy. Just need to befriend our Uncle J who is a great host
15 December 2009 at 13:05

Jessica@Foodmayhem said…
Apparently NYC is known as home of brunch, so if you're ever in town, I've got a bunch of places for you to try. When I think of brunch, I really need the menu to have eggs, pancakes, french toast. I like fusion variations but the staples must be suggested at.
16 December 2009 at 04:54

Scarlett said…
After having read Jessica's comment, I just HAVE to say that nothing (absolutely no kind of breakfast) can beat the typical American breakfast!! It's hearty, filling & comforting. Infact, I'm going to do a post on it! :P
16 December 2009 at 11:07

I thought that brunch traditionally meant a mix of breakfast and lunch. So you would have eggs and waffles counters along with main courses.

I think V's response was interesting because folks might have their own way of decoding stuff. We had a lazy 'lunch'. But if one goes at twelve then this could be a 'brunch' too

Jessica hope i can take up your offer soon

Serendipity said…
very random thought but WHEN you go back to moshes - have the shakshouka and the herb sausages.