on January 29, 2010
Gosh it hardly seems like it's been two weeks since I stepped into Arindam and Sasha's place at KL. Two Fridays back. What a night it was. We chatted over satays and butter pork till 4.30 AM on Saturday morning. Did I say that I hadn't really met them before this?

Plans were made for the next day's lunch before we slept. But then it was that sort of a trip. Plan for lunch at dinner time. Dinner at lunch time. Lunch at dinner time. You get the drift. Breakfast? Given that I woke up at one' O Clock in the afternoon? No chance!

Our first lunch together saw us at a restaurant called Jaya Palace. We were woefully late but luckily they served us. And what a meal it was. 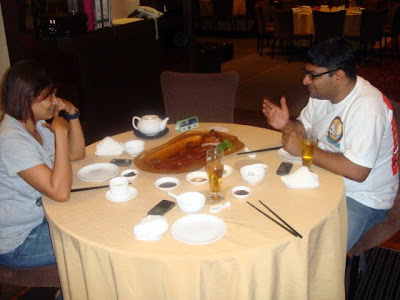 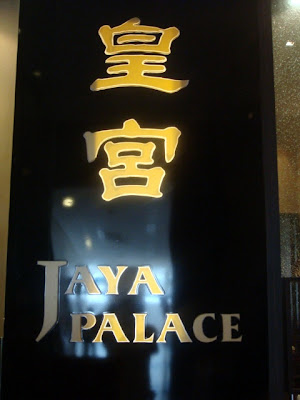 We started with smoked duck. I can't begin to tell you how wonderful it was. Tender to the T. Passive sweetness typical of the Orient. A very genteel smoked taste. Not too strong. Not shouting out. Yet making its presence clear. The sort of dish that took you centuries back to the romance of the Silk Route. I almost felt like Genghis Khan as I dug into my plate.

And to think that this dream like dish is not what we had come for! 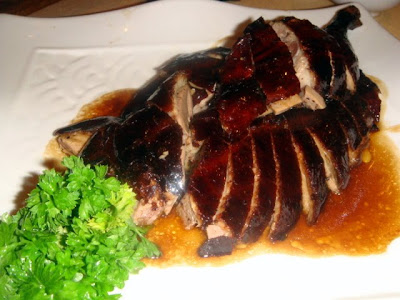 Arindam had actually got me to Jaya Palace for Siew Yoke. Which thanks to yours truly snoring till one' o clock was over. So we 'settled' for a roast suckling pig.
Now Finely Chopped is not really vegetarian friendly. But the picture of the suckling pig could be too gruesome for many red blooded meat eaters as well. Or perhaps not. Keep reading if you have it in you.
The dish consisted of a four month old pig. Half of it was plated and served to us. So you had the litter bugger lying in front of you from head to butt. Sliced as is wont in this part of the world. If you look closely you will see a less in your face picture of the dish on the table in the picture of Arindam and Sasha earlier in the post.
If the smoked duck was divine. So was the suckling pig. I am running out of adjectives. Crackling skin. Little blobs of baby fat. A very thin and incredibly tender sliver of pork. Let your imagination run amok. You will be there. 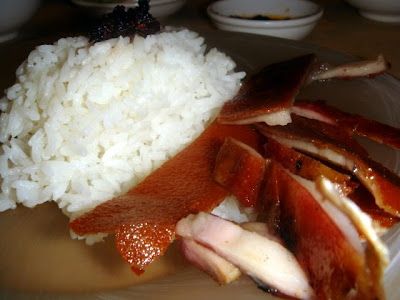 This is the point at which you will go off Finely Chopped for ever. Or gnash your teeth in lust and hunger. It was the most perfect dish ever. But then so was smoked duck.
Which was better? Well as the birds in George Orwell's Animal Farm said, "four legs good, two legs good".
This brings me to the end of the last of the KL food stories. A week after I landed there. Sasha, Arindam, what do I say? You guys are the best :)

As they say back home "aashchhe bochhor hobe" (it will happen again next year).

Not that I can wait that long. 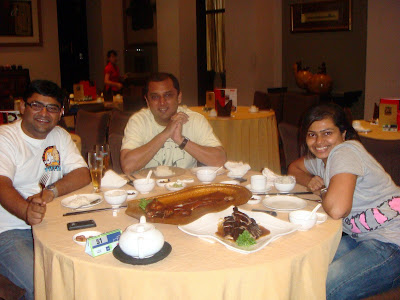 Update: I reconsidered my photo decision when I read a comment from Scarlett who's been a reader right from the beginning. I asked myself what would Tony Bourdain or Bobby Chi (saw him eating crickets at Manila yesterday) do? So here you are ... junior sliced ...shock and culinary awe 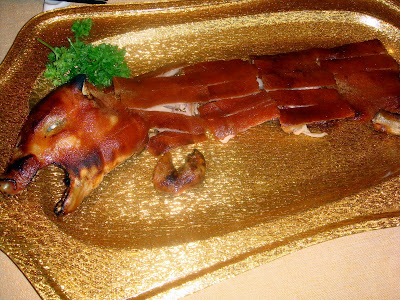 Sayantani said…
was reading your previous posts on KL and now I truly understand why you are awaiting that 'Asche bachor abar habe'. :-) loved the pan mee picture. I would have loved to dig in a bowlful too.
30 January 2010 at 19:31

Kalyan Karmakar said…
I am already missing KL. The pan mee was the best. And that was tough given all the wonderful stuff on offer Sayantani
31 January 2010 at 01:07

Rituparna said…
Headed to KL and Singapore soon and taking notes on all the amazing food that needs to be eaten. Parents will be around so the pig and sushi will get missed this time around. I hope "ashche bochore abar hobe".
:-)
5 May 2011 at 15:52